Ali asked to call Daddy this morning. When he got on the phone, she verbally exploded into the phone..

“I’m sick because I coughed all night long and Mommy just threw up all her food in the potty and I need you to come home right now and make me feel better!!!!”

That pretty much sums up how we’ve been feeling lately. Ali is desperately tired of me being desperately ill, as am I. And yes, she’s sick too, but she coughed for about five minutes when she woke up, not all night long, poor (dramatic) kid.

I try to never write a whiner blog, but at some point, it becomes impossible to be honest and yet not whine a little. Because Newbie has been pretty much a misery-inducing parasite for the past four and a half weeks straight.

I’ve told Ali that she was a much more well-behaved fetus…and she seems to take comfort her superior status.

If it were just the nausea, I think I’d be able to handle it, but it’s ohsomuch more than that, and anything not caused directly by Newbie is instead being caused as a side effect from my attempts at medicating my other issues (which I’m starting to give up on).

After Ali witnessing me cry for the second time in her life yesterday (the first time she found so traumatic that she still talks about it mournfully and often) as I was totally DONE with this stage of pregnancy, I decided that I couldn’t continue trying to do everything, and so basically haven’t been out of bed or off the couch since then (except to throw up my food, of course).

But I’m well aware that it’s all worth it. Due to a more concerning set of side effects, I had to go back to the doctor last Monday to make sure everything was okay. We were relieved to see that Newbie has apparently thrived in the mess he/she’s made of me – a billion times bigger, heart beating like crazy, and totally snuggled up to my cuddly, cozy uterine wall. 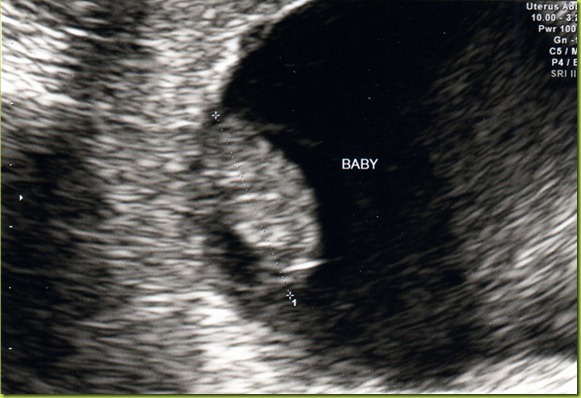 The dishes may not get done,

Work may be late,

Ali may have to play Princesses by herself,

And blogs may not come as often,

But I’m growing a human.

And I’m going to do something I rarely do and cut myself some slack.