We went on a walk through the neighborhood Tuesday night on the actual ROADS, which I thought surely that would keep anyone else from injuring themselves.

However, Ali was quite excited that we were walking with our neighbor Alice,

(whom Ali adores with all her heart, to the point that she sings about her quite a bit – over and over and at the top of her lungs, “See Alice! See Alice!!!”.)

(Especially when we’re in a busy restaurant about to eat lunch with her.)

(Which makes everyone within earshot wonder why a three year old is singing about Cialis, but really, what can you do.)

Anyway. Ali, in her bubbly excitement about ED Drugs seeing Alice, got to skipping really good, and did what every kid does but Ali never does: she fell.

And skinned her knees.

For the first time ever.

Which was the second time that she’s ever seen blood come from her body with no nurses and needles involved.

She actually handled it much better than I expected – she cried for a couple of minutes, but was then able to move on and walk, with the help of picking a new flower every few minutes from which to gain strength.

However, Wednesday morning was a different story.

She was perfectly fine, singing and happy, until I came into her room and turned on the lights.

She pulled her legs out from under her covers, saw her knees, and screamed with shock and horror.

Seriously – you would have thought that she had a Freddy Krueger shaped scab.

My comforting meant nothing to her. The severity of her injuries rendered her completely unable to walk.

No amount of logic on my part could convince my miniature Ricky Bobby that she was indeed still capable of walking, despite the blooded state of her knees.

Especially down the stairs.

Carrying her downstairs was mighty hard to do and probably seriously comical to watch, considering that I started Jillian’s 30 Day Shred back up this week, and my leg muscles were so traumatized they’re curled in a fetal position in the corner of the attic.

Her blooded knees also required her to live in a constant state of moaning and great remorse…until I forced her to allow me to put “long pants” over them, which initially caused great gnashing of teeth at the horrors of fabric touching her anguishing knees, but ultimately toned down her tortured mindset, if only a wee bit.

Once that was done, I was finally able to trick her into realizing that she could indeed walk (but no worries – no Talladega Nights strategies were needed).

And then she would swap her limp to the other side. You know, equal opportunity and all. 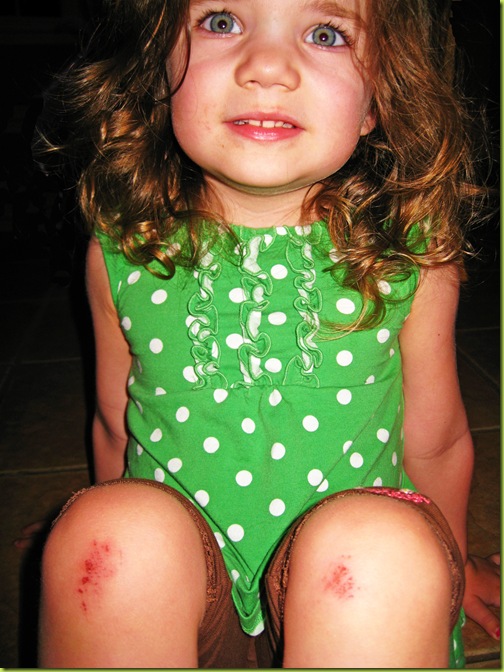 Oh, the tragic life of a toddler.

I’m pretty sure she’ll never be able to hold down a job that require knees.

But on the bright side, she could sing the jingle for the Cialis commercials.