While I was having fun making pottery last weekend, Chris and Ali had some Daddy/Daughter time, which is always ripe with a few good tales. So today, Chris is guest blogging to share a couple of short stories from their day.

It Takes Guts To Be a Parent.

There are sensitive subjects that you have to handle carefully with small children. Reproduction, for instance. Death comes to mind.

Last Saturday I added one to the list: Taxidermy.

Ali and I went to the Bass Pro Shop, to “see the fishies.” It was the first time both of us had been there. We played on ATV’s, 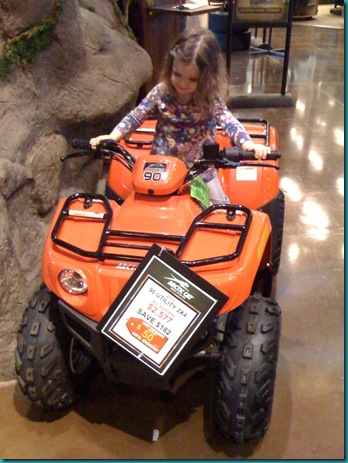 got on every boat available on the pretend dock, 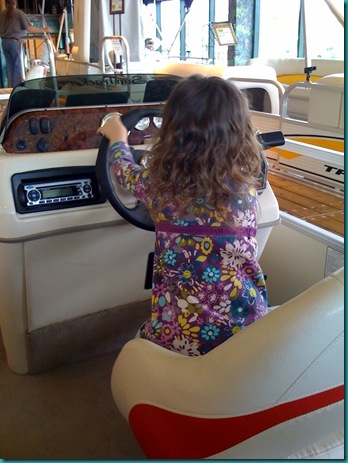 But the odd question came when looking at a bear. 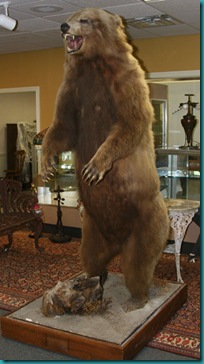 A frozen, unhappy looking bear standing much taller than daddy, with his or her mouth wide open, claws ready to go. Ali and I had the typical conversation.

“Look at the big bear…..He’s so tall… He’s got big fingernails…They need a trim….Look at those teeth.”

And that’s when she said it: “Is that a real bear, daddy?”

I was frozen for a moment, then muttered, “Well, sort of, sweetheart.” I quickly changed the subject, and we went on checking out the other animals: wolves, deer, bears, a wild hog that had very scratchy fur. We discussed famous children’s literature regarding bears, wolves, houses, porridge, that sort of thing.

In any case, the question lingers in my mind. I feel like she just asked me where babies come from. How do you address the concept of hunting, death, and preservation with a 3 year old? This could bring many side issues such as guns, guts, Heaven, even art. One man’s fresh carcass is another man’s potential Picasso. The ultimate organic art.

For now, I think I’ll just have to stick with “Well, sort of, sweetheart.”

Ali likes the park. Loves the park. That can be any of several parks around town. Overton Park in Cahaba Heights, the Trussville Park by the middle school, even Wald Park in Vestavia, but the King of Playgrounds is in Leeds on 119. 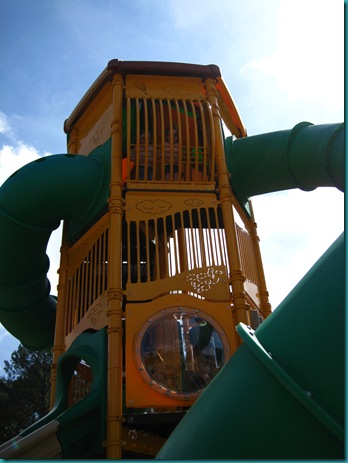 Those super high yellow twin towers, merry-go-round, tot lot, and assorted swings rule the school, as it were.

However, the one odd thing that most public parks have in common: no public restrooms. I’m not sure exactly why this is, and its never been a problem when Ali was Pampered, but now that we are potty trained, when nature calls, its usually calling on the red emergency phone and time is limited to answer.

So as we were playing at the park, I gave the 15 minute warning of time to leave. About a minute later, there was nature: ring-ring.

And rightfully so, Ali wasn’t ready to leave the park. She wanted to #1, and then get the rest of her allotted 15 minutes. I am just and fair to a fault, so there was only one answer.

What’s life if not an adventure? I was certain that mommy had never done this with her. Not that we had talked about it. I just know mommy.

However, it was surprisingly not foul on the inside, had the appropriate paper resources, and only smelled of the industrially clean blue liquid living at the bottom. So aside from the short-lived fear of falling 4 feet into the murky blueness somewhat akin to the cave lake in Harry Potter and the Half Blood Prince, Ali & I were both fine with it.

So this is where confession time comes in. The truck was parked a fair distance from the playground equipment and even further from john, so upon leaving the relatively un-nasty potty, I just let Ali go back to the playground. She had only touched the urinal once and the potty twice.

Plus, she was already running a fever, so I figured either

(a) her body is already fighting infection and is ready for this, or

(b) we can fight a virus with a nasty bacteria, sort of a Godzilla-vs-Mothra showdown that leaves all sickness dead.

We played for a little while longer, and when we got back to the truck, I gave us both a ferocious hand bath with wet wipes, then I took her through drive thru and let her eat in the backseat with her Mothra hands. Hopefully wet wipes are strong enough to defeat such an enemy, with or without Japanese subtitles.

15 thoughts on “When Daddy’s in Charge.”