The saga of styling Ali’s hair seems to be ever present in my mind and blog, a dreadfully boring subject to at least 70% of you, I’m sure.

However, all of my mornings of attempting to spray and scrunch her hair so she didn’t look like a mangy dog despite her desperate attempts to get away from me have finally paid off.

She was taking FOREVER to wash her hands after going to the bathroom, so I finally called out and asked her what she was doing in there.

She wouldn’t let me see, of course, but the next day, I snuck in, and after being caught on camera, she was nice enough to give me a very informative tutorial on fixing curly hair. So I’ll let her do the rest of this post: 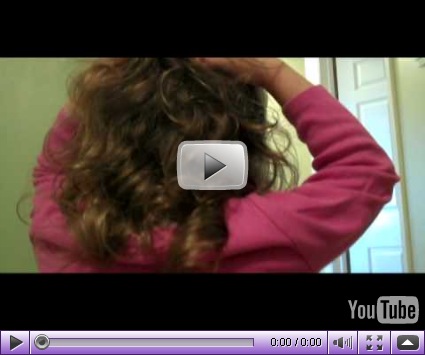 At least I know WHY we scrunch, now. To keep the water in, of course.

(She has also informed me that scrunching can also be called “Wrinkling”, and doesn’t at all understand why MY hair won’t wrinkle like hers.)

And okay. I admit it. There might have been a BIT of incentive offered in between video takes…but I needed details!

19 thoughts on “Styling of a Curly Haired Toddler, Self-Styled Edition.”