I’ve always pretty much despised Basketball, but I’ve been REALLY looking forward to making my bracket this year.

Although I used to always keep up with Chris’ bracket for him (because I’m a geek and I love to count things), last year was my first ever attempt at making my own bracket, which I did with no research, no information, no nothing except for my very primitive knowledge of what schools have good basketball programs.

I expected to be the laughingstock of Chris’ Office Pool, but by some sort of sports miracle worthy of a heartwarming and inspirational movie starring Sandra Bullock as me, I totally swept the whole tournament.

Obviously, this was simply a very cliché example of beginner’s luck. But just in case I have a very specialized psychic ability to predict basketball outcomes, I was waiting for the selection show to end Sunday so I could run to the computer and print out a bracket.

(because you know, if I WERE basketball psychic, I’d hate to find out after it was too late that the gift was time-sensitive.)

Also, because of Ali’s great talent at gambling, I helped her make a bracket last year. Her selection methods were a bit archaic, and her outcome was so bad that I’m pretty sure she had no mathematical shot at winning after the first game.

Being that she’s another year older and wiser now, I’ve been hoping that her skills would better reflect her maternal genes.

Also, I thought it would be an excellent opportunity for us to brush up on her geography skills, since it had been a while since we had reviewed her states.

So we began our selection process. She definitely showed that she had talent. She had talent at knowing which school was seeded the absolute worst and picking it very decisively.

I tried swapping up the order in which I asked her the teams, but she still managed to pick the worst team in almost every match-up. At least she’s consistent.

And her winner – Morgan State, a 15 seeded team.

But really, I don’t know why I’m surprised that she would predict 20 Cinderella Stories – the girl loves princesses with all her heart.

(Did you like that Basketball terminology I just threw around like I know something? I thought you’d be impressed.)

Anyway, I recorded the first part of our bracket selection show for posterity’s sake…which actually included her best picks of her entire bracket – it all went QUITE downhill after this:

(Forgive the poor videography. I was trying to fill in her bracket while keeping the camera on a shifty toddler. Alas, the results.)

And, I decided to share the fun this year and create my own ESPN bracket group: Grasping for Objectivity. So far, Ali and I are the only two in the group, which is why you need to get yourself over there and play with the super-cool drag-and-drop features of the bracket-making process and join us!

Unless you’re scared of Ali’s stiff competition, that is.

(Just pick Morgan State like her and I’m sure you’ll do great.)

I think you have to join before Wednesday night or Thursday or before the Tournament starts, whenever that might be.

There will be a prize for first place – I’ve decided to use my newest favorite hobby, frame-making, to make a set of frames for the winner. This is the first of the set: 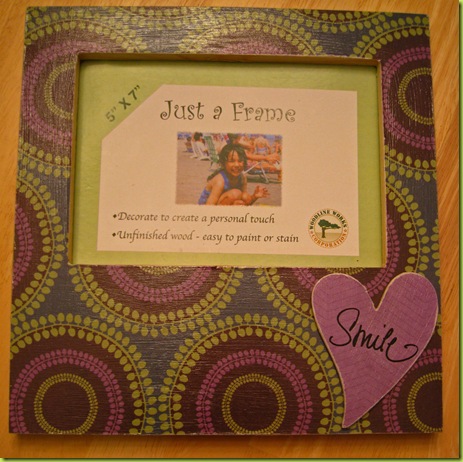 By the time March Madness is over, I will have used my during-Basketball-Game boredom to create at least three more frames to go with this one, all different sizes but with coordinating patterns.

And don’t worry – they’ve already got Sandra Bullock on standby to make this year’s inspirational sports sequel, this year starring the mother of child prodigy, Ali – the only person in the ENTIRE WORLD to correctly pick Morgan State as the 2010 National Champions.

11 thoughts on “Bracketology and Geography”