I told the story of our cat, Oreo’s rebellious peeing-on-the-bed teenage years a while back.

However, I left out an important part of her saga.

If you don’t remember the original story and don’t want to go read it, the basic idea is that Oreo has an odd and unexplained abhorrence for crutches. And since I had two foot surgeries which created the need for 10 weeks of crutch use, Oreo decided to deal with her crutch-angst by peeing in our bed.

But only when I was in it, of course. After my first surgery in 2005, we didn’t immediately realize that the crutches were the problem. We hadn’t had her very long for that point, and it also coincided with her approximate “coming of age”.

And so, we thought that maybe she was in heat.

But I didn’t want to get her fixed right away. My beloved childhood cat, Boots, had a couple litters of kittens, and I had VERY fond memories of playing with tons of tiny and precious kittens.

(Granted, being that I was four years old, I didn’t have to do any of the hard parts like clean up kitty afterbirth or a whole litter of kitty poo or find homes for a gazillion kittens.)

So, since I was idealistic about the whole thing, we decided that if she WAS in heat, then she must need a man in her life to make her feel better, and, therefore, quit peeing on me.

AND we’d go ahead and get kittens – a double solution!

(I have no idea why Chris was agreeable to this plan.)

Luckily, my friend Gina’s cat, Kolby, also a newly-no-longer-kitten, was quite obliging about the idea of romance: 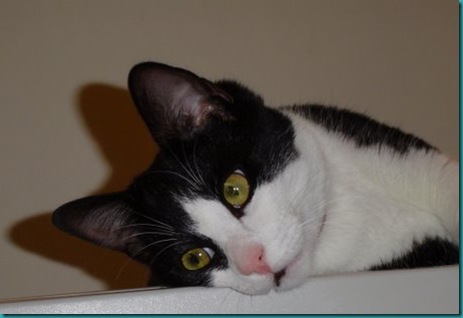 So we invited him over for a date.

Oreo, however, was not as excited as he was about their evening together.

As soon as Kolby arrived, she ran to the top of her tower, and would hiss at him anytime he got close. 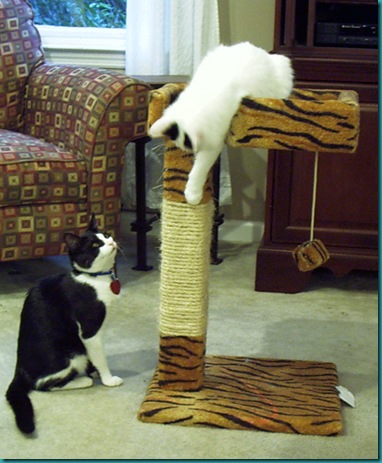 Kolby’s tension over his newly discovered needs being met escalated. He could sense Chris’ maleness and immediately sized him up as competition, and possibly even the reason that Oreo must not be interested in HIM. So Kolby attacked Chris’ legs with the ferocity of a fire-breathing dragon.

(I’m pretty sure that Chris still has scars.)

At that point, we decided that they must just need some time alone. Maybe Oreo was bashful to get to know a man in front of us.

So we carefully gathered them up and shut them in our guest room, told them to have fun, and came downstairs and turned on a movie.

Periodically, we would hear crashes, shrieks, and thuds.

Things must be going well.

After the movie, we headed upstairs to see how their date had gone.

Our guest room resembled the aftermath of a Great Feline Massacre.

Clumps of hair rolled through the room like tumbleweeds. The smell was overwhelming from Kolby’s attempts to impress Oreo with his ability to spray pee. And from Oreo’s attempts to use her pee as mace.

And Oreo’s tail was very solidly locked between her legs.

The next day, I determinedly hobbled, on crutches, and took Oreo to the vet to IMMEDIATELY get fixed.

And Kolby? Poor guy. His heart was so broken from his failed romantic pursuits that not long after The Date, he ran away from home. We are nearly sure that he set off in a vain attempt to reunite with his lost love.

Oreo, however, refused to return his calls.

20 thoughts on “A Tortured Romance.”