As I’ve mentioned a few times before, Ali is very curious about my chest, insisting that I absolutely must have babies in there. If I deny the presence of babies, then I am barraged with question after question of wanting very much to know what exactly they are.

I change the subject, I ignore, I stall…

But finally, I couldn’t delay her questions any longer.

One can only withstand being jabbed and asked, “But Mommy, what are they CALLED???” for so long, you know.

Since I adhere to the “vague” theory of Toddler Anatomy Terminology, I finally decided that the word we would use would be “chest”.

She has taken this new knowledge and run with it, and we have been talking about the chest even more than we talk about poo poo.

(I can’t deny that the subject change is actually a nice relief.)

Her questions are inquisitive, nosy, and analytical…

“Why do you have BUMPY chest?”

“I have a flat chest. When will I have a bumpy chest?”

“Why does Daddy have a flat chest?”

I have explained thoroughly that Mommies have bumpy chests and Daddies have flat chests.

…which got us off on a whole new tangent…

“If you’re a Mommy and have a little girl, what are you going to name her?”

(Obvious choice, seeing as how her cousin AND her best friend’s sister are both Tessas.)

“And then I’ll name one Sophie.”

(Not so obvious choice, seeing as how her Great-Grandmother’s Dog is named Sophie. The very same dog that bit her last year, for which Ali still hasn’t forgiven her. But, in Ali’s defense, she has a second cousin named Sophie, too.)

“What will you name your little boy if you have one?”

(The name of the boy she currently claims she is going to marry. I guess if her little scheme works out, her son will be Benjamin Junior.)

(But if it doesn’t work out, she’s going to have some explaining to do to her husband as to why she wants to name her son after her toddler crush.)

After her naptime, the questions start right back up.

She looks down, rubs her chest, and says, “It’s not bumpy yet!!”

“No, hers isn’t bumpy yet either.”

“Nope, she’s still got a flat chest too.”

Nothing like a good boob obsession to start at the age of 2. 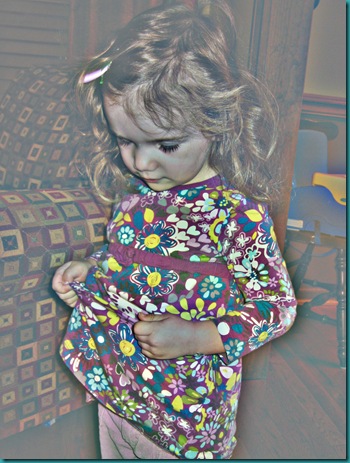