My brain is quite scattered today, as my poor sweet husband has had the stomach flu. He is feeling better now, but it was bad enough to make him go to the doctor for only the third time in our 8 years of marriage.

He caved and went for the express purpose to rule out the possibility of having The Flu Who Must Not Be Named.

And, thank goodness, he had no flu of any kind, so now we’re just hoping that Ali and I don’t catch his 24 hour stomach bug.

But due to the extreme rarity of Chris getting sick (which I make up for and then some, as you might have noticed), I’ve been reminiscing about the last time Chris got a stomach flu: the weekend after we found out that I was pregnant with Ali.

Of course, we were scared to death that I would get it, but I thankfully just stuck to the nausea already gifted to me by pregnancy.

But all this thinking got me going down memory lane…

As I have mentioned before, it took us a good two years to get pregnant.

Which means that I peed on approximately 367 sticks until one finally turned up positive.

Somewhere around stick #213, I pretty much believed that I would never see a positive result, so I almost quit looking at them. It became more of a hobby at that point.

I found ways to cut costs on my new stick-peeing hobby, which primarily consisted of buying my pregnancy tests by the truckload from a great internet site for less than $2 a test. But every now and then, I’d buy some on sale somewhere else – you know, just to mix it up a bit.

After all, no one wants a boring hobby.

The first week of May 2006, I wasn’t feeling well. As usual, I added up all of my symptoms, figured out how they could all point to me being pregnant, and pulled out one of the different tests that I’d bought on clearance at CVS.

As usual, it was negative. No big surprise.

However, a couple of days later, I was feeling worse and worse. I was nauseous, exhausted, and QUITE emotional. My boss made me cry at work, something I’d done maybe one other time in my 8 years at the company.

After regaining my composure in the ladies’ room and returning to his office, he had the nerve wisdom to say, “Maybe you’re pregnant…you should take a test tonight.”

(In his defense, he knew we’d been trying to get pregnant for the last century and a half.)

I blubbered, “I took a test on Tuesday. It was negative.”

“Take another one. You never know.”

So, since I was given an excuse to blow another test (“My boss told me to!!”), I pulled out the other test from that same clearance two-pack that night and headed to the bathroom to commence my favorite hobby.

I was looking at the instructions on the wrapper on the way, and I stopped.

He ran up the stairs, panicked at the urgency of my tone.

“Yes! Ireadthetestwrong! I took a test on Tuesday and I read it wrong!!!! I’m PREGNANT!!!”

“What?? You take those things all the time. You know how to read them. Are you sure?”

At this point, we’re both beaming with disbelief and shock.

We said at the same time “Take another one just to be sure.”

So I did – I managed to somehow find it within myself (and my bladder) to take several more tests.

Plus, it was just so much fun to actually PASS one of those dang tests, I figured I better enjoy it while I could.

And so, the legacy that I give Ali in all of this is, despite my experience as being one of the most pregnancy tested women in the world, I still couldn’t manage to read it correctly when correct reading was really needed. 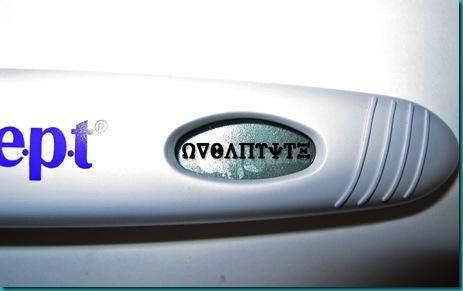 Luckily for her, she seems to have inherited her Father’s extra-careful, anally-thorough genes.

(And yes, my boss was, and still is, QUITE proud of himself for predicting my progeny.)