My good friend Lydia (of Mom Jeans and the Dreaded “Long Butt” fame) had her fourth baby Tuesday night (obviously she is braver than I). A few of us split up the rest of their kids, and I got the lucky draw of Radford, baby #3: 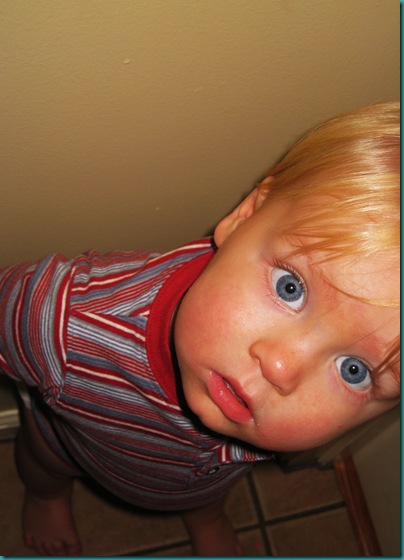 I really think he may be the cutest 16 month old in the world.

So, for two and a half days, I practiced what it would be like to have TWO kids. And you know, it’s really not so bad. I could totally handle it – if only I could pop out a 16-month-old instead of a needy, not-sleeping, screaming newborn.

Radford loves everyone and thinks that everyone loves him. Which is a correct assumption on all but one creature’s case: 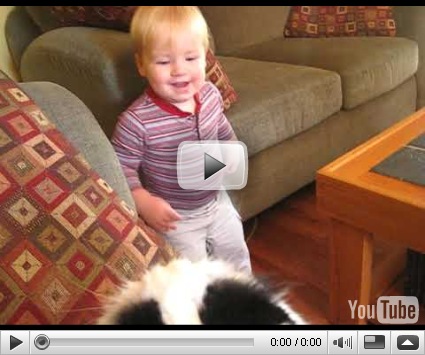 (Don’t worry…no toddlers were put in harm’s way by the making of that video…Oreo is all hiss and no scratch.)

Now, being that Ali isn’t accustomed to living with a BOY, except for her Father, who is the epitome of couth and manners at all times <cough>, she’s been learning all about the male species…like what it REALLY means to not just burp, but to BELCH.

Wow, that kid is talented.

And no wonder – he eats like a MAN. He ate five Banana Nut muffins for breakfast on Thursday, and was begging for a sixth, signing “more” and “please” as fast as he could. 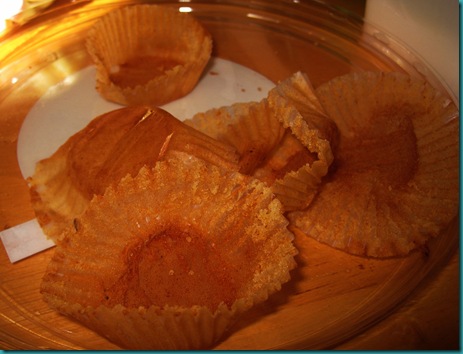 ….which led to quite the crumbly toddler: 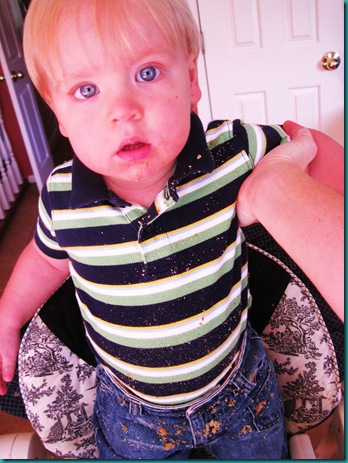 But when I cleaned up his mess, I realized that maybe he didn’t eat QUITE five muffins after all: 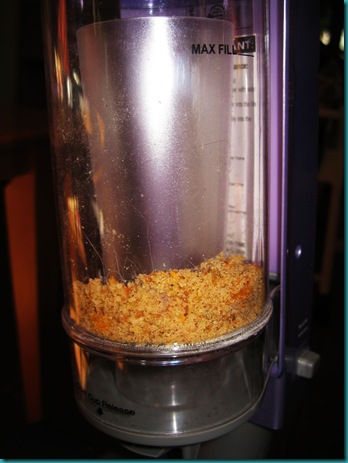 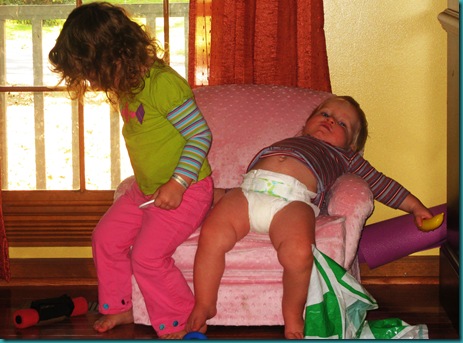 (All he needs is the remote control)

And he how to be sure and make a big production of filling one’s diaper: 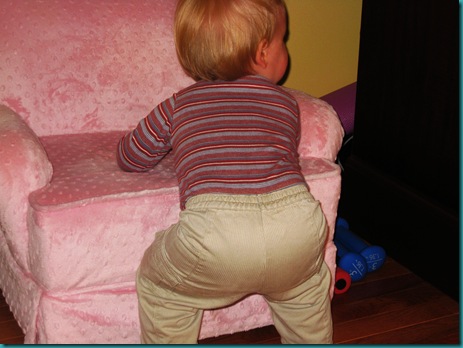 But I’m afraid that the MOST memorable thing that she learned from Radford was the difference between boys and girls.

Poor thing…I think she may be scarred for life.

It all started Thursday morning..Radford woke up sopping wet, so I peeled his pajamas off, wiped him off the best that I could, put a new diaper on him, and stuck him in the crib with Ali while I ran him a bath.

I came back in less than two minutes later to find him completely naked, with his already-wet-again diaper laying in the bed.

(At least he left it on long enough to pee in it.)

(Either that, or he took it off and then aimed at it.)

Ali was staying as far away from him as she could, backed up into the corner of the crib, but staring at him with a look of confusion and complete disturbedness.

She didn’t say anything about it then, but I could tell she was troubled by his nether region weirdness.

A bit later, I was changing his diaper, and Ali said, “Ew! Mommy! He POOPED in his diaper!!”, all while staring at his, well, parts.

“Well then what DID he do in his diaper?!”

Trying to avoid this inevitable conversation, I said, “Well, he tee-teed in his diaper…”

So I finally said, “That’s his parts, baby.”

Confused, she said, “I have parts…”

“I know, but his parts are different that yours because he’s a boy.”

….then she walked away, her face completely reading “I just lost all of my innocence about life.”

I’m afraid she’ll never be able to look at Radford the same again.

21 thoughts on “Stung by The Birds and The Bees.”