Well, you’ve of course already heard about the most, um, “interesting” part of our trip, but in addition to our Dragon*Con adventures, we had a completely packed-with-activity Atlanta weekend.

We stayed at Twelve Hotel this year, and in spite of their apparent naming chosen by a Twelve Year Old Boy (besides the name of the hotel, the restaurant was called “Room” and the bar was called “Lobby”), it was a great hotel.

Chris doesn’t feel like he gets his money’s worth out of a hotel unless we use the pool. I’m not so much of a hotel pool kind of girl (I don’t know why – just a random quirk), but being the good wife that I am, I joined him.

The pool was rooftop, so we could watch all of the Atlantians in rush hour stress: 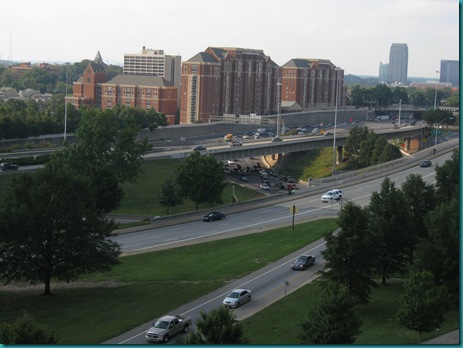 While we got to enjoy this serene view: 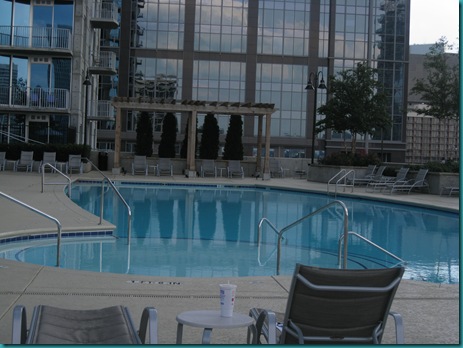 As it WAS afternoon rush hour, the sun wasn’t exactly still high in the sky, and it was an overcast day as well. So, in his quest to get his money’s worth, it took Chris about 20 minutes to get this deep into the frigid pool, one centimeter at a time: 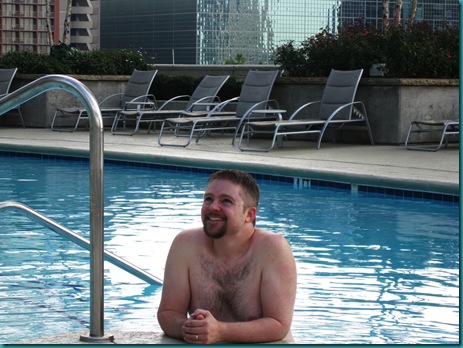 Yes, that smile was frozen on.

I, however, was perfectly satisfied getting our money’s worth on the lounge chairs. At which it didn’t take Chris too long to join me. 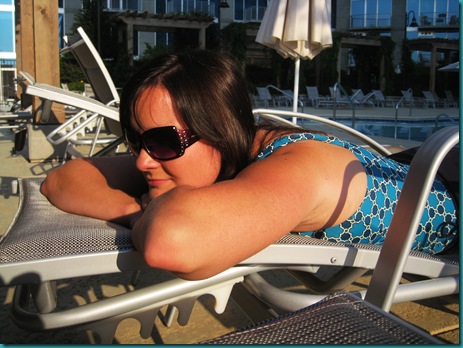 Friday night, we took our traditional trip to Taverna Plaka. Our waiter was especially enthusiastic and convinced us to get up and dance, arm in arm, with most of the other patrons around the entire restaurant.

I would have a picture, but my arms were tied up with Chris on one side and a very bouncy lady on the other.

And Greek dancing can really take it out of you. It was the first of many times during the weekend that I was thankful for Jillian and her Shred for getting me in shape.

At any rate, all of us patrons either wore out or wanted to get back to our dinner (they were just delivering ours as our waiter was dragging us to the other side of the restaurant), and so ALL of the waitstaff joined in and did their own very fast, very impressive crazed dance around the restaurant: 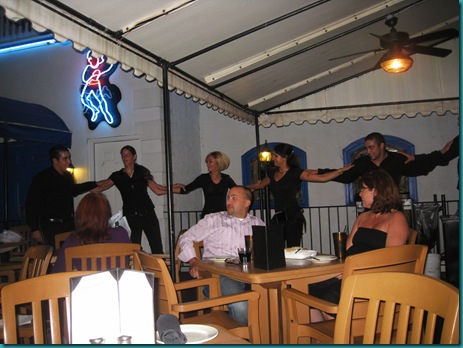 It was NOT a good time for anyone

to need a drink refill.

We enjoyed our Greek feast: 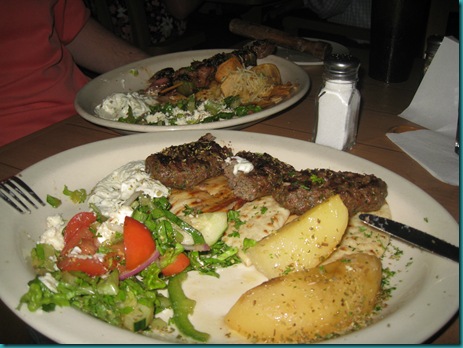 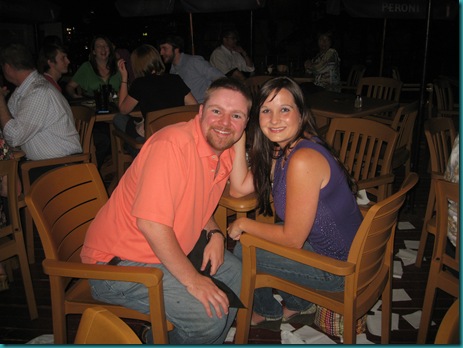 And eventually, the lone bellydancer came out to see us: 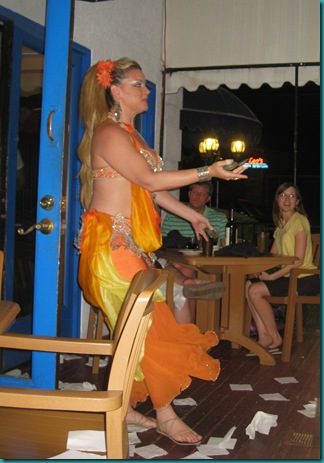 Don’t get a neck cramp, honey. 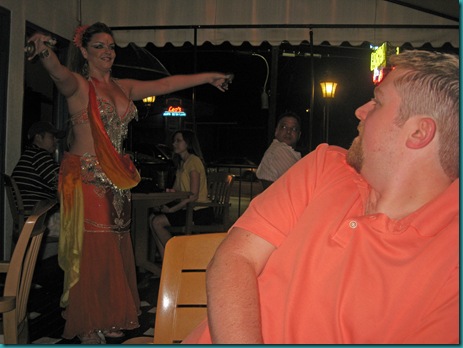 We were sitting outside at plastic deck furniture, so she (fortunately) couldn’t get up and dance on OUR table.

The next day, after the Parade of all Parades, We headed to Gameday and all of the fanfare at CNN Center and Centennial Park: 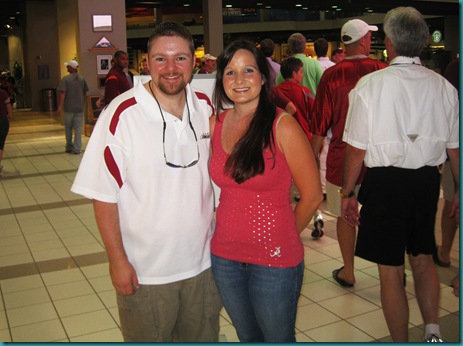 Yes, we were very shiny. It was a long walk. Note: second time of the weekend that I was grateful for Jillian and her Shred.

And, of course, I had to check out a bit of the latest Atlanta fashion (things always hit there a bit earlier than they make it to Birmingham, thereby giving me much fodder to be amazed at).

Obviously, leggings are in style with the force of a spandex brigade, and are still as bizarre as they were last year when I tried on the Gold Lamé Leggings of Shame.

Except this year, the styles are apparently a bit lacier. 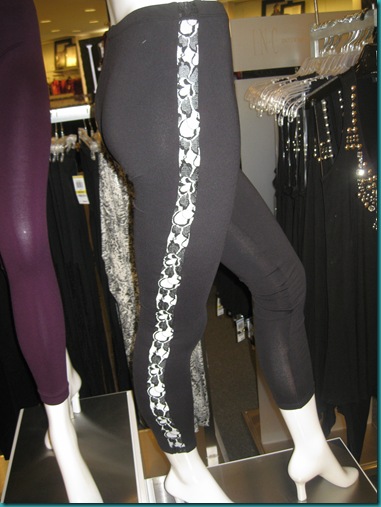 But why stop with panels when you can just Completely Commit to Lace Peek-A-Boo? 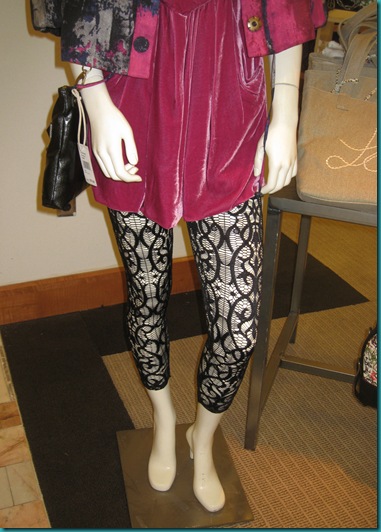 But if you’re really wanting to add a bit more class to your leggings, definitely go with Victorian Ankle Buttons: 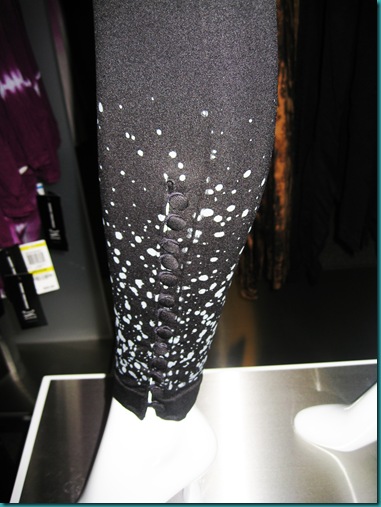 Oh – and football. I suppose you might have thought I had forgotten about it by now. But we had a great time at the game – our seats were higher than I had ever sat in a stadium – LITERALLY the last row.

Note: five hundred and sixty seventh time of the weekend that I was grateful for Jillian and her Shred.

I really love heights, so I enjoyed our seats, but it really did feel like the stadium went straight down from beneath us, so I can imagine that people who don’t like heights so much might not have been able to stomach our vantage point: 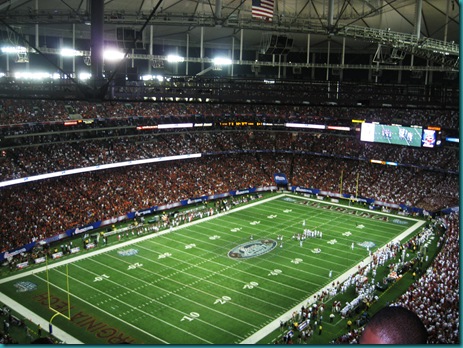 However, another benefit of the back row is that no one is behind you to spill beer in your direction. LOVE it.

AND, there was a shallow space between the back wall and our seats, so had I felt the need to sleep through the game like the olden days, it would have been much more comfortable for me, and MUCH less constricting for Chris: 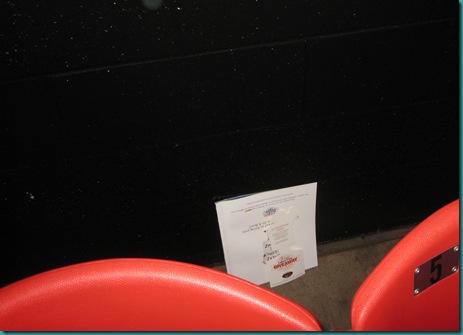 I definitely discovered my calling at this football game: real-time tweeting. Admittedly, I often have trouble staying focused on the game, but I had SO much fun tweeting the game from my perspective that I actually paid MORE attention to the game than ever before.

I felt as if I were on the very cusp of social media news reporting…as if I were making history with my many Hokey Jokes. I mean – how cool is it that the NCAA almost banned tweeting at games? I almost wish that they had so that I could have felt like an underground, forbidden, repressed reporter.

But I pretended, anyway. And, if you have any interest in reading these ground-breaking tweets, I preserved them for all of social media history to come at B-Sides.

Oh – and lest you think that Dragon*Con was the only place that Zombies were in abundance, that is not the case. Apparently, zombies are very stylish this year, and the Alabama Flag Core was proud to represent: 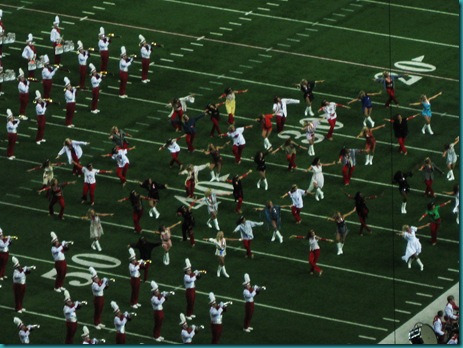 At any rate, the game was quite exciting (which means that it was QUITE stressful for poor Chris and for the guy in front of me that really needed anger management classes), but by the end, Chris had a smile on his face: 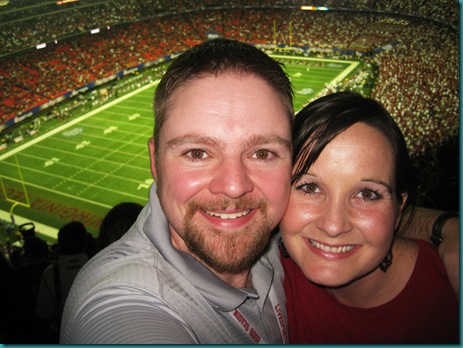 Notice the empty Virginia Tech side of the stadium? Yeah, they were hokey and left early.