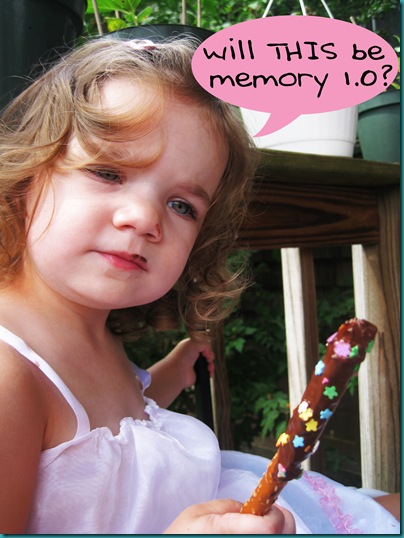 Being that I have a 2 1/2 year old, I often think about first memories. Mainly because Ali should be storing hers away any day now, whether it’s making flowers out of meat with Mommy and Daddy, learning to Pommel Horse on the toilet, or watching Mommy bravely catch a spider the size of a small dog and move it to a new home (which, by the way, a new and different huge spider moved right into that spot days later. Apparently, it’s a hot market).

Of course, knowing Ali, it will probably be one of her few and far between injuries. Like the fact that she fell out of the chair in my dressing room OVER A YEAR AGO and still refuses to sit in it, referencing it as “the chair I fell out of”. Yeesh.

But whatever it is, it should be soon, and I can’t wait to find out what “sticks”.

I never really knew what my first memory was until I had a quirky professor in college who was obsessed with them. One of my Psychology professors? No – umm, an Economics Professor. He offered ten extra points if we would simply write out our first memory and give it to him.

A bit freaky, I know. He said he collected them. I wonder if he made memory art out of them somewhat akin to Toenail Art.

But being the unbelievably super anal-retentive geeky student that I was (just call me Hermione), I of course spent the semester trying to analyze exactly what WAS my earliest memory so that I could properly complete the extra assignment.

And I’m pretty sure I figured it out: Disney World.

Or, more accurately, our trip TO Disney World. I’ve only been once, and I was 3 years old, so it is easy to separate these memories and put a date on them. I don’t remember a whole lot about the trip – just snippets…

But the MOST vivid memory I have of the whole trip left it’s mark on me – literally.

We were staying with my Aunt and Uncle who lived on the beach (as best as I remember). We were walking down a cement walkway to the beach, and I tripped and fell, and somehow managed to cut a perfectly round, perfectly dime-sized hole on top of my left hand. As memory serves me (24 years old as it is), it was spurting blood everywhere. I might have lost a quart or gallon or so.

Of course, being three years old, this was traumatic.

And, my Aunt had no band-aids.

Of course, being three years old, that made it all the more traumatic. And I’m sure that I proceeded to make it more traumatic for anyone within earshot.

In fact, for YEARS I thought that was why I was left with a scar on the back of my hand – the lack of immediate application of a band-aid, preferably with some sort of cartoon character on it (which speeds healing, of course).

I have since reconciled and bandaged over this issue with my Aunt. So much so that she approved of me exposing our bloody past to all of you.

(I crack myself up.)

The truth is, I THANK my Aunt for my first memory, because it’s the very LACK of band-aid that made the memory stay with me. If she’d given me a band-aid that day, I’d have no first memory at all except for a vague visual of a big plastic Dumbo.

I still have a very faint scar, perfectly round and dime-sized, and I like it. I like keeping my memories close by.

So…what was YOUR first memory? You know, for my own freaky little collection. I’ll even give you ten bonus points.

(My professor would be so proud.)

15 thoughts on “Memories are Like Scars…In a Good Way, Of Course.”