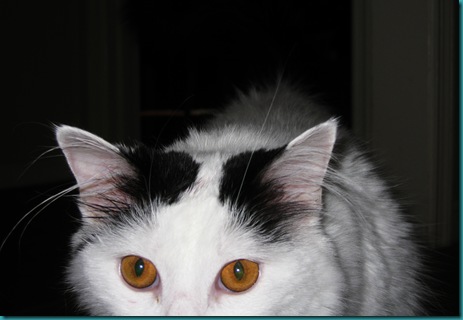 So I very suddenly and violently came down with an allergy to Oreo on Friday. We’ve had her for five years, and I have always bragged about her amazing hypo-allergenic properties – she doesn’t dander, she isn’t oily – she’s tiny and puffy and pretty and clean.

I noticed last week that she had a bunch of weird black specks in her fur. She usually stays pretty clean, so I found it odd, but after searching her fur for anything living and coming up with nothing, Chris and I concluded that she must have just “gotten into some dirt”.

(Yes, she’s an indoor cat. Yes, us concluding that she could have gotten into some dirt whilst staying indoors IS a reflection of my cleaning habits.)

So on Friday, when she still had it in her fur, I figured maybe I should brush it out, and that would help my allergies.

But messing with it – OHMYGOODNESS. It set a BOMB off right in the middle of my face. I only THOUGHT I was having an allergic reaction before.

But I got all of the specks out, and decided to see if once the dust settled, everything would be okay.

I tweeted, as a joke, that I was suddenly allergic to my cat, and so I was going to try giving her some Benadryl.

Called the vet: they said it sounds like flea dust.

They told me to put some of the black specks in water, and if it dissolved into blood, then it was flea dust (aka – Oreo’s blood from them biting her).

I put some in water, and sure enough…my little bit of water started turning into the red sea.

And, besides a flea treatment, guess what the vet told me to give her?

I hate it when my jokes become reality.

(Vet also told me to give her a bath. I will do a lot of things to help my cat, but THAT is not one of them. I don’t have a death wish, after all.)

He told me to give her children’s liquid Benadryl, of which I happen to have a whole bottle minus one dosage, due to finding out that Benadryl makes Ali a VERY cantankerous child.

So I filled a syringe and proceeded to attempt the impossible: medicating a cat.

I haven’t given Oreo medicine in years, but somehow she remembered.

I picked her up and moved toward her mouth with the syringe, and she started VOLUMINOUSLY foaming from the mouth, somehow accomplished by raking her tongue feverishly across her teeth (I suppose that could be termed “gnashing of teeth”).

Crazy amounts of foam were cascading from her impenetrable mouth and flying around the room as she lashed her head back and forth. It looked something akin to one of Ali’s bubble baths if there were a fan involved, except much less sanitary.

I chased Oreo around the house, penned her and held her down a few times, took a complete dousing of slimy foamy cat saliva, and managed to get maybe an eighth of the dose actually down her throat.

Which is bizarre, seeing as how she only weighs maybe eight pounds. How DOES she manage to win every single time in hand-to-paw combat?!?

Then I spent the rest of the day finding and cleaning up little piles of foam, as she continued to create her foamy toxin for good measure.

Second Benadryl dose time: I drafted Chris to help me. He held her as she repeatedly knocked the breath out of him with her freakishly strong back leg kicks, all while covering him (and I) with another round of flying foam.

He surmised that she was using her awesome hair-balling abilities to actively reject the medicine, hence all of the foam.

However, between Oreo’s Benadryl, my Benadryl, the flea medicine, and Ali’s bedtime prayers where we asked God to make everyone feel better EXCEPT for the fleas, I definitely am feeling relief from my symptoms .

Oreo, however, doesn’t seem so thankful. 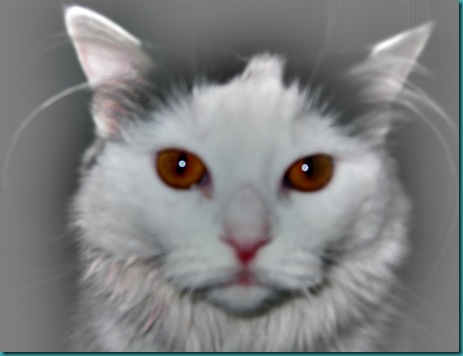 14 thoughts on “A Fleaed Foamy Feline.”