We went to an especially friendly grocery store the other day, and they gave Ali a purple balloon.

Sure, I was a bit worried, what with the fate of the last purple balloon (she still asks where that balloon went anytime we drive near the scene of the crime).

We left the grocery store, and perused the outdoor sale tables of the toy store next door.

A tall, fit security guard and another much-less-fit guy were standing nearby engrossed in conversation where the non-security guy was describing, in great detail and drama, a car wreck that he had just been in.

We looked in vain at still-too-expensive boutique toys for a few minutes, and then headed to the car, walking by the deeply-in-discussion pair.

My sweet, innocent, two year old’s balloon did what balloons do, and floated over and brushed up against the strong, brusque security guard.

While simultaneously gasping and letting out girlish, panicked yelps.

Then, in quite the embarrassed stammer, said, “oh..oh..it was a balloon!! I’m sorry..I was really into that wreck story.”

Me, teasingly: “And you’re supposed to be a security guard?”

Me: “Well, at least now I know how to rob whatever you’re guarding…bring in a hundred purple balloons and throw them at you!”

Luckily, he didn’t arrest me right there for being cheeky (yes, as a matter of fact, half of my vocabulary DOES come from “Thomas the Tank Engine” – quit bumping my buffers about it!)

So…anyone want to help me carry out The Great Latex Bank Heist? 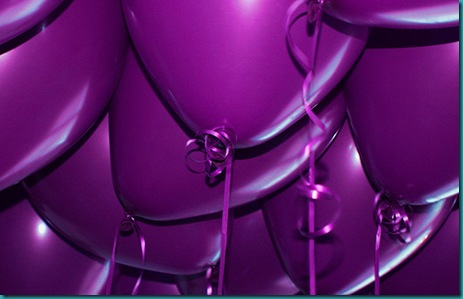 6 thoughts on “Weapon of Mass Destruction: A Purple Balloon.”