I have mentioned the miracle of our Small Group before, but just for a refresher, we have a group of six couples that meet every Thursday night. Between the six pairs, we have 14 kids and 2 more on the way.

(Obviously, Chris and I are in last place in this race. And happy to be there.)

But here’s the miraculous part: we all arrive to one of the couple’s house around 7:15pm or so, then put all 14 kids to bed, and then have our bible study/small group after they go to sleep around 8pm. We meet/socialize/laugh way too loud until around midnight, then we all wake up our kids, take them home, and put them back to bed.

And this actually works.

The only reason it does, I’m convinced, is because the group was started before #1 of 14 was born, and so from birth, one by one, all of our kids have become accustomed to this process as a weekly part of their lives.

So anyway, what with the rapid fire at which our group is shooting out babies (two in the past two months and two more before the year is out), we’re needing to look into consolidation of kiddo-sleeping-arrangements.

So, one logical pairing is Ali and AJ. They’ve been best friends since birth, are the same age, and it would be quite handy if they learned to sleep in the same room for vacations/spend-the-nights anyway.

So last night was the trial run.

David read them a bedtime story together: 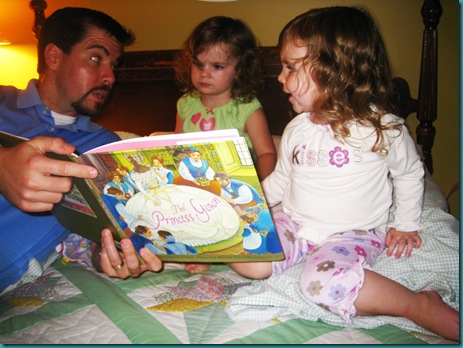 And then we tucked them in.

Ali in her Pack and Play: 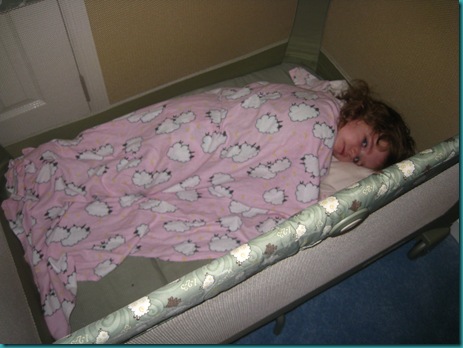 And AJ in her “Big Girl Bed” across the room: 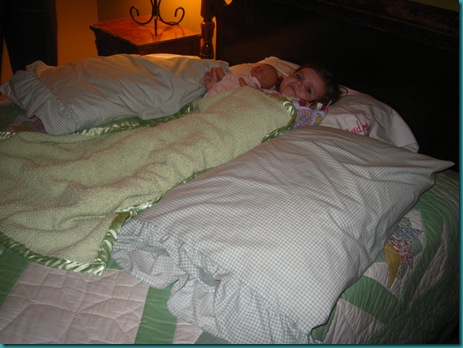 And, of course, we sold it to them as a “special treat” (for them, not for us, of course), and that they had to be wise if they wanted to do it again.

As expected, there was much talking. And then, screaming.

Me and Ashley and David all rushed upstairs (Chris wisely stayed out of the chaos).

Ashley got AJ, and I told David, “I think Ali pooped.”

Umm, our hosts don’t OWN a cat. It was most definitely my child.

So I changed the cat-poo-esque diaper while they calmed AJ down.

And the story, as retold by AJ, was, “Ali started to cry and then she didn’t. So I cried. I don’t want to sleep in here anymore.”

On to Experiment #2: This week’s Mom’s Group was at Pump It Up. In my mind, I was picturing it being like Kid’s Gym, at which we had a delightful time. So I offered to give Ashley a morning off, and take Ali and AJ.

But I was wrong. It was two rooms full of huge inflatable slides, obstacle courses, and every other sort of contraption built for BIG KIDS.

Along with a maxed out room of aforementioned BIG KIDS. In all seriousness, right after we walked in, they posted the “We are full – take your screamin’, cryin’, disappointed kids elsewhere.”

We got in an inflatable for a minute with Luke. Although Luke and AJ had fun for about 30 seconds, 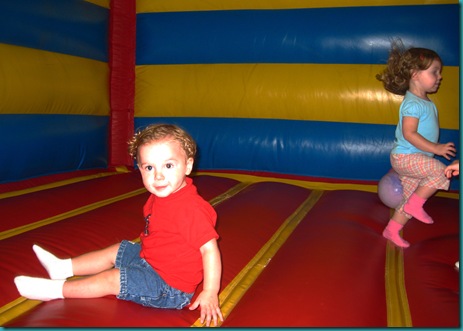 Ali, in spite of her trampoline skillz at home, wouldn’t let go of me. 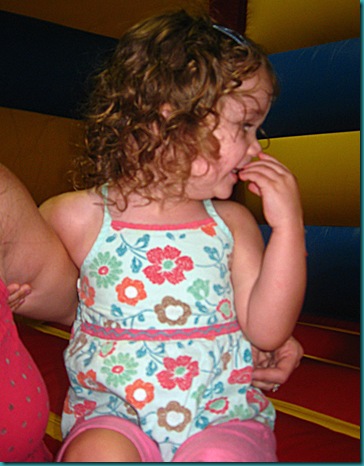 And then, as more kids piled in like locusts during a plague, the reality of the potentially-lethal situation hit home to Luke and AJ: 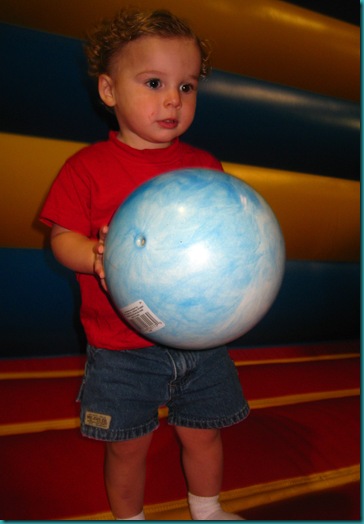 So we quickly escaped, after no fewer than a dozen knock-downs on the way out the door.

AJ then wanted to play on one of the smaller slides. She couldn’t climb through the obstacle course to get to the top, so I was allowing her to climb up a little ways and then slide down. 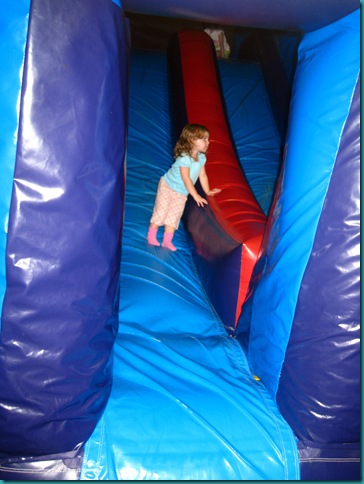 Stupid, I know, but there weren’t, at that time, any other kids coming down.

And then it happened: this male spawn of Satan child comes barreling down the slide, STARING AT AND SMILING at AJ’s back and he AIMS to run SMACK INTO HER. I run, but not quick enough. He slides right into her back, full speed, knocking her backwards and down the slide. And she had no idea it was coming.

I ran over, grabbed her up, stared the kid down and said, “That was NOT nice” in my most evil controlled tone of voice.

I turn around, and his mother is walking up (she couldn’t have heard me over the blaring music and screams of various kids, including but not limited to AJ’s.)

She had seen what had happened and said rather judgementally and snottily, “I could see THAT one coming.”

Seriously? No apology – just a very-unveiled implication that I was careless? Nice.

So that was it. 10 minutes in, multiple falls, the girls were too scared to do anything – it was time to find new fun. I gathered up the girls, and as I was doing so, the employee in charge of safety wasn’t looking where he is going and ran right into me while I’m carrying AJ – so hard that we almost fell over.

As if I wasn’t already planning on leaving.

We went out, I told them that we had been there long enough to find out that it wasn’t age appropriate, and could I please have my money back. They must have been able to read my expression and quickly gave me my money.

So we, along with Christen, Luke, and Aubrey, AND Julie and her four (they were just getting there and we told them the bad news about it being maxed out AND a Danger To All Of Society) went to Chick-Fil-A.

Now I must admit: I normally do not care much for the enclosed scream-fest that is the Chick-Fil-A Playplace. But after Pump It Up, it was as calming as taking a Bubble Bath while being serenaded by a Strings Quartet.

(Although that’d be a bit intrusive for my taste.)

Anyway, the girls and their friends had a MUCH better time: 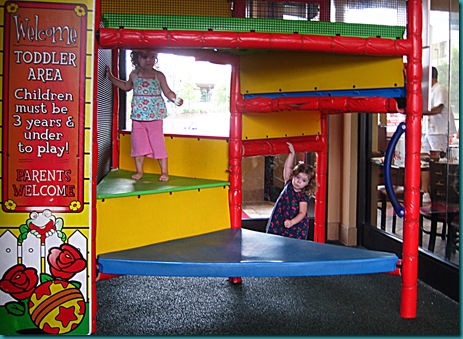 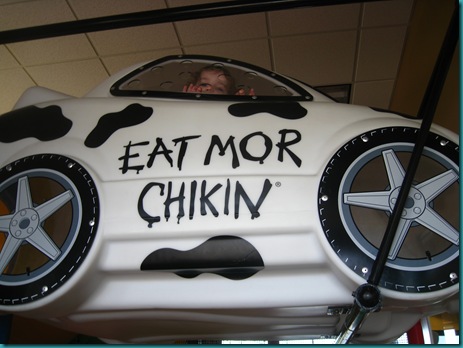 AND, as an added bonus, AJ was even able to meet her idol, SuperWhy: 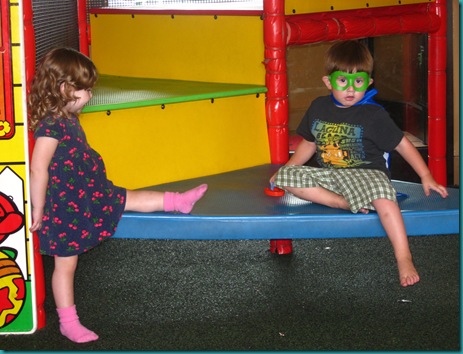 She paid that kid no attention until he put on his mask and cape, and then it was all swoons, stares, and giggles as far as the eye could see.

Not that the poor kid is going to get a complex about just being himself or anything.