To any neighbors passing by our driveway Sunday night, I’m sure it appeared as if Chris was in the doghouse: 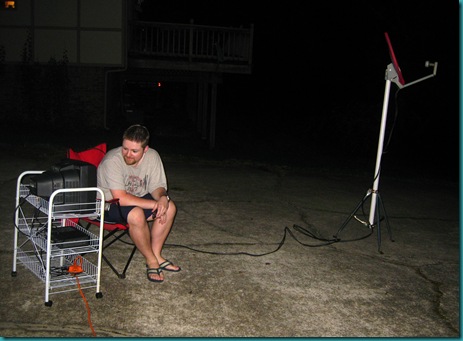 Yes, in fact, he WAS watching TV in the driveway, extension-corded to the max. But I didn’t kick him out – I promise! He was out, on his own accord, putting the finishing touches onto his rigged-up-satellite TV System, preparing for tailgating.

And yes, he DID, in fact, order an Alabama-logoed satellite cover for his second-hand dish: 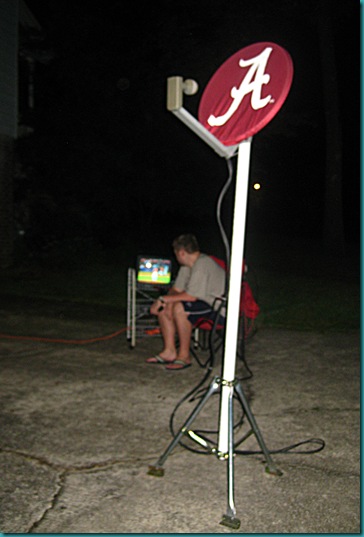 (And yes, it is, in fact, even made of football-jersey material.)

But luckily he hasn’t stolen the flat-screen out of our bedroom yet. After all, he DID purchase it specifically for football season. We just get the perk of having it in our room out of season.

On Monday he texted me with excitement in his letters. He received the beloved tickets in the mail – and was so excited that he finished his TV System “Just in time!!!”

Something tells me that he just MIGHT be getting excited about the impending doom football season.

Okay, yes, it’s true. I’m not yet excited about football season, just like last year. I used to enjoy football a lot more, but I’ve lost a lot of my spunk somehow.

I think I’ll blame it on Ali. You know how they say that some women lose their…err…well, certain “drives” after having a baby?

I think I lost my football drive.

However, one thing that I AM looking forward to is the first game of the season.

Well, not exactly the GAME, per say, but the trip that gets to go ALONG with the first game of the year.

a) It’s in Atlanta. I love visiting Atlanta.

b) It’s going to be a date weekend – Ali will stay with Gramamma, and Chris and I will go stay in a fancy hotel and have a weekend of wonderful togetherness in “The Big City”.

c) Like last year, it’s the same weekend as Dragon*Con. Which means more pictures and stories of crazies. I can’t wait!

d) The game will be indoors. Need I say more?

So, that’s where I am with relation to our state’s obsession. It’s 31 days until football season, and the only thing I’m looking forward to (so far) is the good excuse to have a long weekend date in Atlanta. Hopefully I’ll soak up some passion for the season soon.

How about you? Do you have more of the football bug than I do? Or would you like to join the Underexcited Football Wives Club? Or are you in the wrong region of the country to know the craziness of which I speak?

25 thoughts on “The Season of Football. It Fast Approaches.”