**For the record, this blog post is Husband Pre-Read and Approved, and is only meant in fun.**

I am, in general, not that hard to please, but there are certain items that I have very particular taste about.

You see, sneakers are annoyingly bulky and inappropriately bold, in my humble opinion. In fact, I’ve bemoaned this before. So if I’m going to buy sneakers, they need to be understated, calm, and not make-my-thighs-look-huge bulky.

And yes, these rules apply to me AND Ali.

Only problem is, Chris gets these “ideas” about Ali’s shoes.

He’ll see a pair of shoes, and decide that she NEEDS them. And, of course, they are always ones that I would NEVER buy her.

But, like our “Love and Respect” bible study is always saying (which is basically the Christian-ey version of “Men are From Mars, Women are From Venus”), “It’s not wrong, it’s just different.”

The last time this “difference” happened, it was at the Carter’s Outlet Store. He had been eyeing a pair of light-up, bright pink sneakers with flowers on them. I had clearly stated that I would never in a million years purchase that pair of shoes by telling him, “They’re okay….”.

He waited until I had to visit the Ladies Room. At the outlet center, you have to walk at least 10 storefronts away to the public restroom. When I returned, he had a guilty look on his face and a Carter’s bag in his hands.

And so, she got her first pair of light-up sneakers. 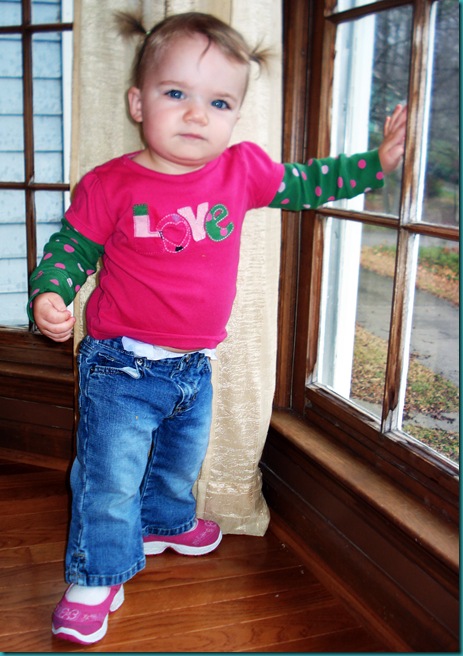 Obviously, that’s been a while back. So, of course, it was time for a sequel.

And what better opportunity than while Mommy is gone to Blogher?

Ali and Chris took a trip to Target. And, apparently, he had noticed the fact that we don’t have any sneakers that she currently fits into (too bad that those light-up ones got too small. . . I cried and cried. . . )

So they went and looked at sneakers. He later described to me the pair that he picked out for her, and they could not have HAD any more red flags of “I would totally hate them.” They sounded a million times worse than the light-up sneakers ever were (which, I have to admit, grew on me a bit over time.)

After the fact, I found them on Target’s website so that you could get a proper visual image. And the picture alone made me want to go dig out and kiss the former light-up sneakers: 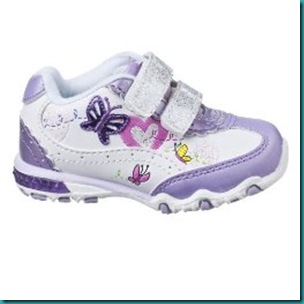 Yes. Sparkles. AND hearts. AND butterflies. AND metallic. It was my nightmare pair of sneakers.

(If you’re thinking to yourself right now, “My, she’s picky”, just remember – this is one of MY quirky picky categories. You know you have them too. They may not be shoes, but you have them.)

So. He had painstakingly figured out what her current shoe size was, and found a pair that was the next size up.

(I guess he didn’t like how quickly I was able to “outgrow her” from her light-up pair.)

He tried them on her. And she mercifully matured in that very moment and did something she’s never done before:

She shook her head, and matter-of-factly said, “I don’t like them.”

And so, he didn’t buy them.

When he relayed their full shoe shopping experience to me, I felt an overwhelming rush of pride in, AND gratitude to Ali.

And, I promised Chris that I would buy her a pair of Mommy-Approved sneakers, as long as he promised to IMMEDIATELY cease and desist ALL shoe shopping.