So, Ali and I went to the mall today. We had to pick up a few things and do a bit of “Girly” shopping.

(As opposed to simply hanging out at the Mall with Daddy on Friday. I prefer to shop alone. Or at least with only a two year old companion.)

On a whim, I decided to work up my courage and actually APPROACH a perfume clerk. I told myself, “She’ll be nice. . .she’ll be glad to help you. She won’t scoff your request for cranberry perfume.”

But she wasn’t nice. She barely paid attention to me, and stopped talking to me mid-sentence when her boss came by so that she could tell her that she needed her vacation time straightened out.

However, she did say, rather boredly in an I-Know-You’re-Not-About-To-Make-A-Purchase-From-Me sort of way, “It’s probably one of the more summer scents – they tend to be more fruity. Try this, this and this.”

Surprisingly enough, two of the three that she pointed out had NOT, in fact, been smelled on our previous hunts, and they actually smelled pretty close to what Chris had described. So I spritzed them on cards and one on each wrist.

And I started to get excited.

Had I found the Holy Grail of perfume??

The ironic part, however, was the brand. The two possibilities were the same brand, and they were not exactly a company that I had a lot in common with. In fact, I actually made fun of them in Saturday’s post, completely unrelated to perfume.

And, of course, since Ali’s been drug around on all of these perfume hunts and she’s starting to take interest in “smelling fings”, she wanted to have some on her also. So I stood as far back as I possibly could from her and sprayed mostly-the-air-in-between-she-and-I with Juicy Couture perfume.

She has smelled her wrist all day long.

I know. I’m a horrible Mom.

However, when we got home tonight, I proudly presented my wrists and the corresponding cards to my sweet husband.

He got this far off look in his eye.

He said, “That’s so weird. My heart rate has definitely increased.”

And, although he’s not giving it a 100% yes-that-is-definitely-the-IT-perfume, he is saying that it is as close as we’ve ever come, and it definitely has “The Magical Scent” that we’ve been searching for.

So I may be making a midnight run to Sephora for Viva La Juicy tonight. 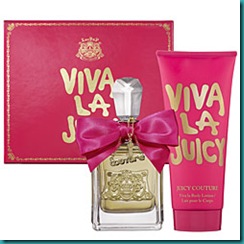 I know. The bottle is about as classy as a 90’s back-windshield air freshener.

I can only hope that it doesn’t come in a gift set with a matching pair of horrendous “Juicy” shorts.

However, ever since I spritzed her with magical scent, Ali has unfortunately bought in – hook, line and sinker : 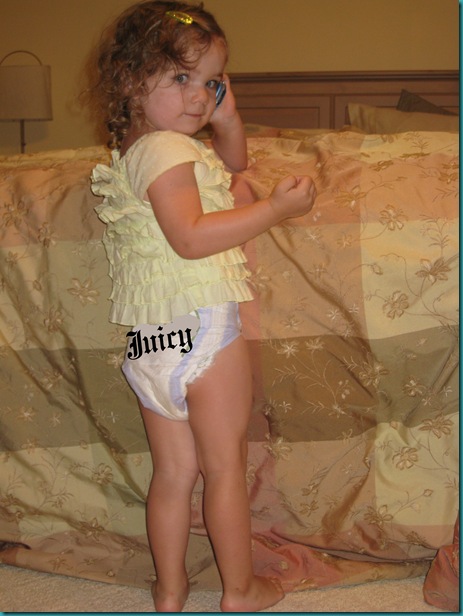 Funny. “Juicy” is much more appropriate on a diaper than on shorts.

16 thoughts on “Just Call Me Sherlock of Perfume.”