(For the record, I can’t pronounce the title of this blog without getting tongue twisted. Go ahead, try it – I bet you can’t either.)

Yesterday, we had a blissfully wonderful Memorial Day family outing to the mall.

Now, in Birmingham, although we DO have multiple choices, “The Mall” automatically means The Riverchase Galleria.

It’s the heaven of the mall world – completely gargantuan, with (nearly) every store that you could possibly want housed in it’s unbelievably huge glass structure.

I had an amazingly satisfying shopping experience – it was one of those rare days where I had spending money AND I found stuff that I wanted.

(Usually those two states of being are QUITE mutually exclusive.)

Plus, besides those two unusual things coming together, the Memorial Day bargains were amazing. So all three factors made for a VERY, VERY deliriously happy mall trip. In fact, I spent $155.16 and SAVED $237.65. An average savings of 60%!!

Of course, he rolled his eyes. But it was, after all, MY spending money, so he was perfectly happy for me (THIS is why you should BUDGET, people!! Never ever argue about money again!!).

Anyway. I quite seriously digressed. Back to our glorious mall.

Right in the middle of it is a carousel: 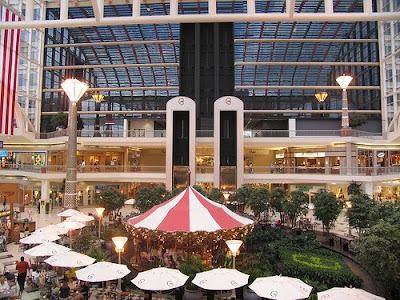 Ali’s never been much of a carousel girl, so I don’t usually push it. We sit near it to eat and she enjoys watching it go around, but she has no interest in being ON it as it rotates on it’s axis much faster than her little cautious self prefers to go.

However, today she must’ve been in an adventurous mood.

Maybe my shopping euphoria rubbed off on her.

She actually ASKED to ride the carousel. I, of course, was so amazed that I immediately agreed.

The Galleria carousel is an animal one, as most are. All of the animals are quite normal – giraffes, elephants, lions, tigers, horses. . .

And that one has ALWAYS perplexed me greatly.

It was as if the carousel creator was completely sober while making all of the animals, but then unfortunately got very, very high right before making the frog.

Because, you see, the frog has a duck head coming out of his butt, surrounded by a wreath of daisies. 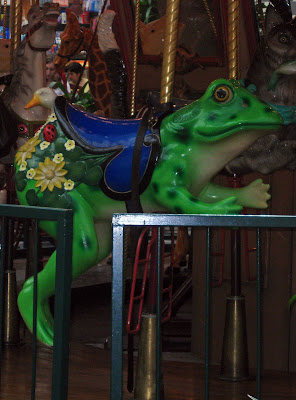 And, much to my excitement, Ali picked this animal, of all of the numerous choices, as her steed of choice: 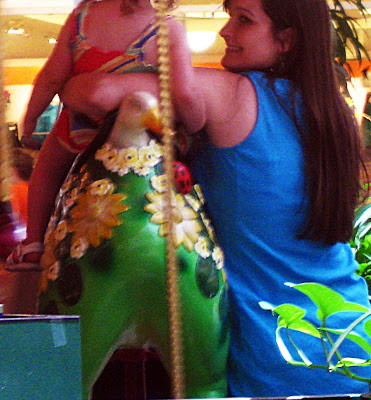 So there you have it. Who else can say that they have had their bum and their daughter’s bum photographed with a duck-butted frog?

Had the carousel creator been there, I’m pretty sure this is what we would have looked like to him: 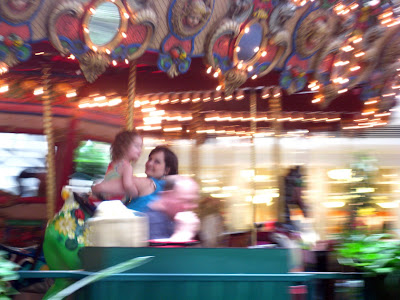 24 thoughts on “The Unfortunate Case of Frog Duck-Butt.”