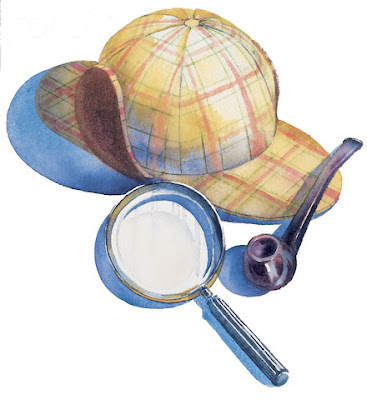 A few days ago, I walked out to get the mail. When I got there, I was quite puzzled by the sudden appearance of this: 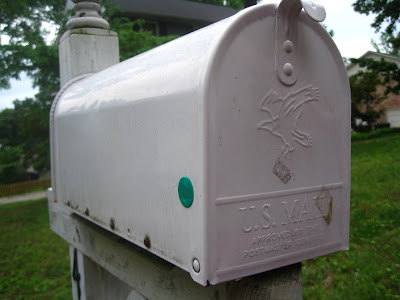 NO, not all the dirt and grime on our mailbox. That’s always been there and has no projection of being removed any time soon.

A raised, green reflective dot, about the size of a quarter, had suddenly appeared.

Why? Who decided that I needed a reflective dot on my mailbox? Isn’t it a federal crime to mess with mail or MAIL CONTAINERS?

So I started looking around.

Across the street: Freddy and Christie had the very same dot. 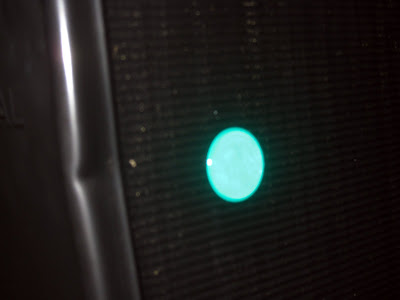 (You can see it’s reflective properties in that picture)

I widened my investigation. Next door: They had a RED dot!!!! 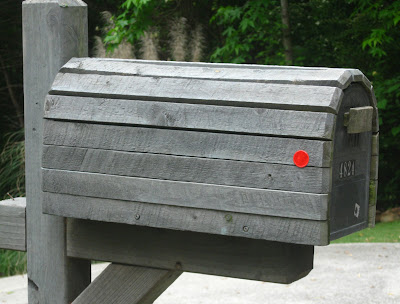 In fact, upon further investigation, most of our neighbors had the RED dot.

But then, some neighbors had no dot at all (for instance, Alice had NO dot, which assuaged my fears that they were marking bloggers).

(Then again, Freddy hasn’t blogged in about 10 1/2 decades, so he most likely wouldn’t have gotten marked in that case)

Ali and I did an unofficial mailbox survey while out on a walk yesterday and discovered that:

I am quite puzzled as to the meaning of these dots.

Are we marked for execution?

Or are all the red dots marked for execution and we’re marked to be spared?

My un-fun, logical theories are:

My preferable, more inventive theories are:

Anyone else have any theories?

Or better yet, has anyone else had any mysterious mailbox dottage happen in your neighborhood?