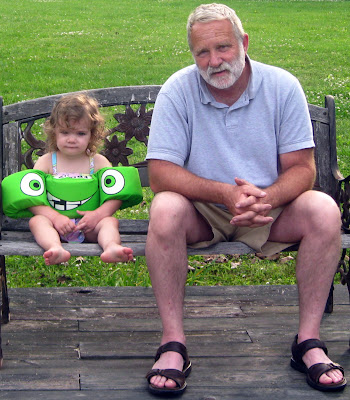 Ali’s vacation withdrawals haven’t been nearly as bad as I’d feared. She’s mentioned Tennessee and being in a house with everybody a couple of times, but it really just hasn’t been a big deal.

However, one thing that has been troubling her is that her “message” from Pop somehow got erased.

You see, Pop left her a message on our answering machine sometime last summer. And nearly every day, she would listen to it multiple times while I was preparing or cleaning up from breakfast.

Of course, I could recite it by heart.

She was usually really good at hitting the “play” button and not the “erase” button, but somehow, like the fate that Gramamma’s message found a long time ago, it got erased.

She has been complaining about it all week, and I kept telling her that we’d get him to leave her a new one, somewhat halfheartedly and noncommittally, as I was always in the middle of the dishes or something when these requests would come up.

However, today she got to the point where she couldn’t take it any longer.

After trying and failing to listen to Pop, she picked up the phone, brought it to me at the sink and said imploringly, “Call and get a new Pop.”

So I called, and of course Pop AND Gramamma were happy to oblige and leave her new messages.

In her glee and joyous state at these new messages, she asked me if she could send an email to Pop.

Except when we got to Pop’s name, she insisted that she wanted to send Pop two O’s like she was sending him two P’s.

So the first line of her email went like this:

I LOVEE YOU POOP

I’m sure that the feeling is mutual.

19 thoughts on “Count on a Toddler to Not Make You Read Between the Lines.”