Ali and I have been ailing for the last couple of days. Me because of my own doing, and her because of I-Have-No-Idea-What’s doing.

Let’s start with me. Last night I was cooking dinner – an experimental dinner (which turned out marvelously delicious might I add – Chicken and New Potatoes in Nabeel’s Greek Dressing and Cavender’s Greek Seasoning, along with homemade creamed corn), and I was quite frustrated with it because it was taking much longer to cook than I thought it should.

I pulled the corningware out of the oven for the THIRD time, hoping that the potatoes would be soft and the chicken not raw. I poked and prodded around, and finally admitted that it was, yet again, nowhere near ready.

Then I reached over to get the glass lid to the dish. Forgetting, of course, that it had just come out of a 450 degreed oven.

I grabbed it heartily with three fingers and a thumb before recalling that it just MIGHT be warm.

I dropped it into the big pan of corn on the stove and ran to the sink in search of cold water.

Now I’m pretty clumsy as clumsy goes, so a burn is not too unusual for me. But for some reason, this one was quite intense. It was fine as long as I had my fingers on an ice pack or under cold water at all times, but the second I took them off, it was unbearable.

That could have something to do with the amazing nerve endings in your hands. I think I learned that lesson last summer, thanks to sleepwalking.

Anyway, my hand continued to sizzle throughout the night (I’m pretty sure I browned it. That reminds me – maybe my dish would have worked better if I had browned the chicken BEFORE baking it).

Finally, hours later, I let Chris hunt around and find the sunburn ointment, and he slathered my fingers up for me. It didn’t help at first, but miraculously, they quit hurting just in time for bed. Aren’t hubbies great?

On to Ali’s ailments (believe me, you’ll wish I stayed at mine). So Ali has had, um, digestive issues for two weeks now. I of course called the doctor’s office a while back, and they informed me that they don’t worry about such things until it has been going on for two weeks.

Actually, I normally wouldn’t either. But I have been a bit more paranoid than usual since our scare a few weeks ago, and I was concerned that this was related.

So I took her in this morning, and of course they did the usual blood tests and such. Those didn’t show anything out of the ordinary, so then Dr. Amy came in with this: 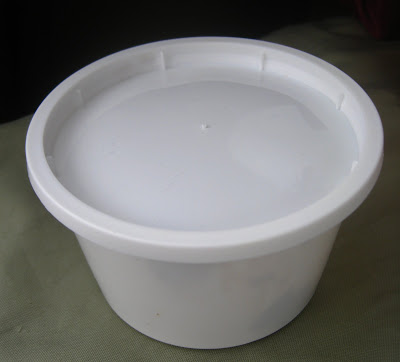 Let me get this straight: You want me to bring you a toddler poop.

Why couldn’t you just be happy with a shrubbery??

Well, as luck would have it, some was readily available about a half hour after leaving the doctor, and before we were that far away.

As luck WOULDN’T have it, no plastic spoons were allotted to me to accompany this mission.

And, of course, since we were out and about, I had no implements of any kind to help me remove requested items from diaper and place into aforementioned container.

And, keep in mind, we weren’t going to the doctor because she had nice, normal, clean, turdish poops.

So I used the cup itself and scooped.

Of course, making a huge mess.

Then I scrubbed the outside of the container with multiple wet wipes while trying not to gag, hoping to clean it up well enough that the poor receptionist to whom delivery was headed for would be happily ignorant to what had preceded her hands on the outside of that container.

Then I text messaged Chris:

“I have now officially collected poo in a cup. Good luck to them finding the poo amidst all the corn.”

So, now that you need your memory wiped completely clean from THAT blog post, I bring you an innocent video of Ali and Daddy doing a nice, “calm”, sweet duet – part of our nightly bedtime routine:

14 thoughts on “Dear God: What Extension Do I Dial for the Warranty Department?”