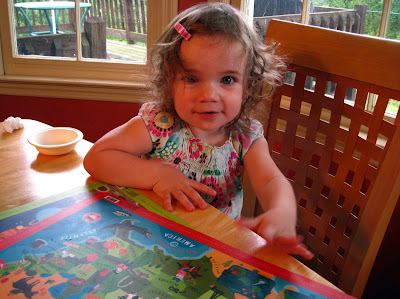 My latest learning project for Ali has been learning states, thanks to a $15 Amazon Gift Certificate I won at Mozi Esme’s blog. I really didn’t think she’d be able to comprehend the idea that the little green shape on the map was actually a very large area in which we lived. However, she really surprised me and seems to understand that concept perfectly well.

Teaching her the actual states has been both easier and harder that I thought it would be. It definitely helps that she is going to be a total geek like her Mommy and Daddy a very studious child: 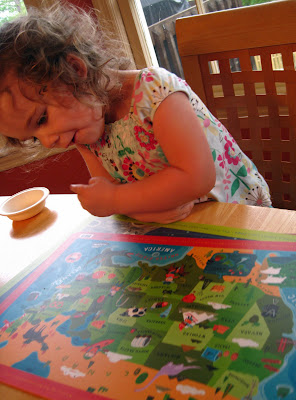 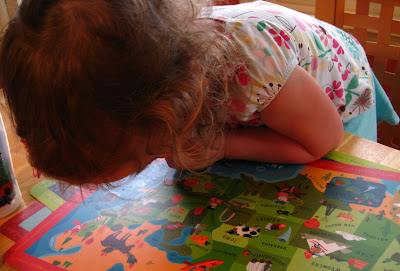 Some states stuck immediately like glue – like the fact that we live in Alabama, and that Mississippi is next to Alabama.

Kentucky was super easy because it looks like a cloud.

She also quickly learned South Carolina, because it is where Barkley, Jeremy and Woods live. It helped that there was a little black girl on the map swimming right off the coast of South Carolina: 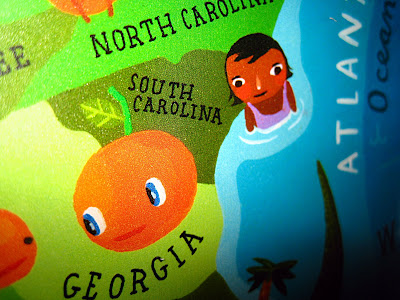 That is now Barkley. (With an unbelievably good tan.)

However some states have been much harder – I guess because there are just so many. Texas took a few tries (even though it’s huge): 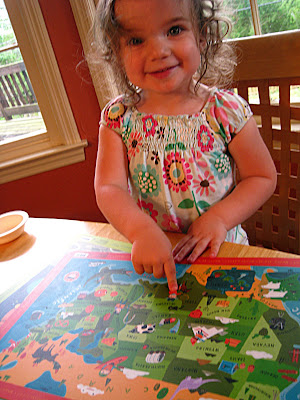 and for some reason Tennessee is really hard. I tried selling that it was like a hat that sat on top of Alabama, but she can’t ever seem to remember it.

In an effort to differentiate the states, I have started making vast generalizations that I will most assuredly have to recant one day. That’s right, I’m already working on creating tons of misconceptions of childhood for Ali.

For instance, cheese comes from Wisconsin. 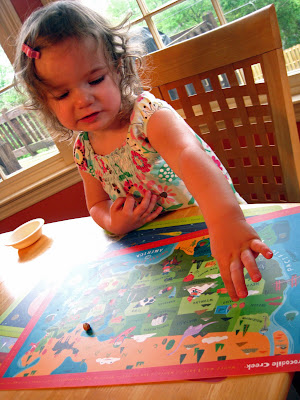 and Starbucks comes from Washington.

I’ve also tried other things to help her remember them. 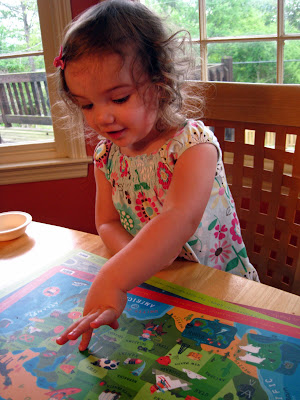 Barack Obama lives in the White House (of which there is a picture on the map) in Washington DC.

Those seem to be more successful.

So successful, in fact, that she now feels qualified to tell me where things come from.

For instance, I have now been informed that Jesus came from North Dakota.

I always suspected that was the case . . .

25 thoughts on “What in the World is from Wyoming??”