I don’t know about y’all, but by the time we finished returning the 5 coffee makers we received to buy the towels and silverware that we got none of, and everything else that needed returning, we had a running list of what brands could be returned to what stores. And we had so many things to return to Rich’s that they brought us a flat to load – as if we were at Sam’s or something!!

However, there were always those gifts that were completely non-returnable. Most likely they were multiple-recycled gifts.

Our most unforgettable of these completely non-returnable gifts was most definitely The Kitchen Cock, lovingly named so by my husband.

It was the tackiest wooden rooster that you’ve ever seen, and to just add insult to injury, he had a big carved-out hole in his butt, out of which stuck a set of wooden kitchen utensils.

Of course, being that this was in 2001 and I wasn’t nearly the picture taker that I am now, I have not a picture to show you. But thanks to our good friend Google, I was able to find a somewhat comparable piece: 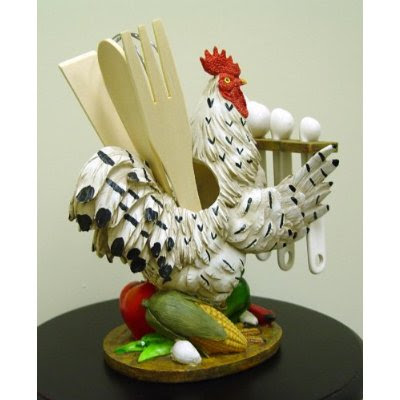 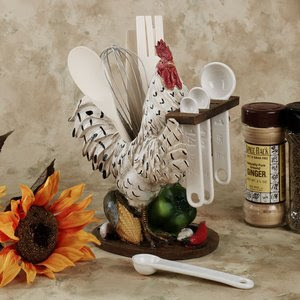 However, ours was much tackier, much multiple-recycled-over-50-years-looking, and wasn’t holding those nifty measuring spoons with his wings.

Oh, and ours had more of a butt carve-out, rather than a back carve-out.

But you get the picture.

Now sure, someone out there who likes more of a country style might be huffing at their computer right now, offended that I would scoff at such a classy piece. If that’s you, please accept my apologies.

However, I was 19 years old when we got married. I had a much, much, MUCH more modern and contemporary taste. There was NOT about to be any sort of roosters hanging out in my kitchen.

So we did the most logical thing.

We re-gifted it to our next friends getting married, Ann Marie and Scott.

Don’t worry, don’t worry. As a JOKE. We got them a real present too (However, if there is any doubt, the KC was most assuredly NOT given to us as a joke. We received it from a very wonderfully sweet elderly couple whom I’m sure would have adored to have displayed it in their kitchen).

Back to the KC. I believe that Ann Marie and Scott carried on the tradition and re-gifted it to JC and Lindsay a couple of years later. I tried to track down The Kitchen Cock’s progress through the world of re-gifting, but Lindsay has apparently washed her memory clean and doesn’t remember who they gave it to (although I seem to remember them telling me that they gave it to someone. . .).

So if you’re out there and have received this lovely collector’s piece, please do let me know.

Oh, and if you haven’t received The Kitchen Cock, but have received an equally horrid wedding present, please do tell!!

Disclaimer: Before you give me a lecture on thankfulness, please do know that this post is meant all in fun. I am very thankful for all of the wedding presents that we received, especially the Kitchen Cock. I mean, no other wedding present gave us more fun and more laughs than good ole’ KC! Except maybe for Ashley and Amanda’s “Bucket O’ Fun”. . .

16 thoughts on “The Kitchen Cock”