So if you’ve been around for a while, you already know that my toddler is not only good at gambling, she’s great at it.

(and, obviously, I am a shameful parent in need of a sound talking to about the evils of letting my daughter have a $1 square in her Daddy’s office football pools.)

So naturally, I had to let her fill out a brackets for Chris’ office March Madness pool as well.

However, this wasn’t as easy as randomly picking a square for her. I had to somehow skillfully coerce my toddler’s participation in making 63 decisions. Yes, if you’ve never counted before, when making a bracket, you have to make SIXTY-THREE choices.

In toddler world, that is over two months worth of deciding between PB&J or Grilled Cheese, which is, in itself, no laughing matter.

So. I started off the most logical way, while using the opportunity of her being in bed after naptime and not wanting to get out yet to trap her into talking to me.

Okay. Now we’re onto something. Although that was probably the worst bracket pick, um, EVER.

We get through maybe 15 choices using the first letter of each team’s name, and then I run into a brick “uh uh!” again.

“Ali, would you like a two or a fifteen?”

Poor thing. She doesn’t realize how risky of a decision THAT was, either.

This strategy only gets me through a couple more decisions, so I switch back to letters, which works for a while more.

Then she just starts flat-out ignoring me.

So I got more creative.

I went and got a post-it notepad and a pen, and returned to my chair that she always instructs me to sit on while she’s playing in bed.

“A U, please!!!” (there was much excitement at this new development.)

So I write a big U on a post-it note and hand it to her. You would have thought I had written her a seven page love note.

This tactic works for quite some time, especially if I switch it up by offering her letters and numbers. 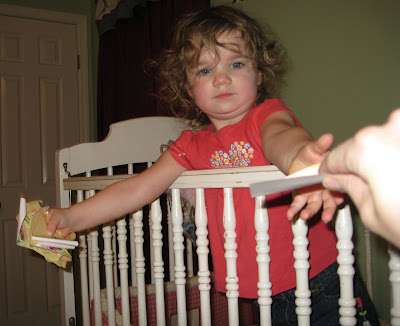 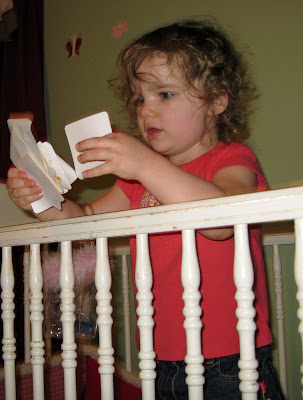 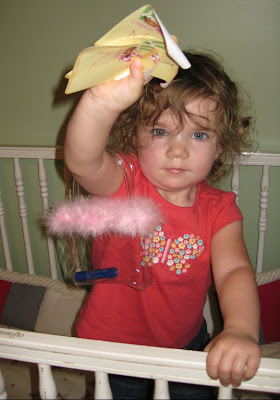 I didn’t encourage her to pick one team or the other, with the exception of one of the times when she lost interest, I asked her if she wanted Radford or North Carolina to win, knowing she’d answer (and not ignore me) since she LOVES Baby Radford.

So, her bracket is picked and entered both into her Daddy’s office pool and into Boomama‘s online game (her user name is “Ali-2yrsOldandBracketing” – look for it somewhere near the VERY VERY bottom).

As are mine – after all, the fun of making and keeping up with a bracket is the ONLY thing remotely interesting, entertaining, or positive about Basketball, in my humble opinion.

Her percentile is currently 0.04%. But just in case you wanted a taste of her strategy, this is what I could tell from her choices:

In summary, I think that Ali would be best off if she sticks to gambling on football rather than on basketball. You gotta know what you’re good at and stick to that.

6 thoughts on “Teaching Toddlers Important Skills, Such as Bracket-Making.”