We bought tickets months ago to the “A Day With Thomas” event that comes to Calera once a year (although it is next weekend as well, if you want to head on over for yourself). Ali has never been, and with her unbelievable love obsession with Thomas, we knew that it would be a dream come true for her.

We’ve hyped it for weeks, and this week it has been a constant source of conversation. Every day we talk about the Thomas countdown, and she has been elated with the upcoming event.

I’m not going to lie. . . when we were walking up, just thinking about how unbelievable this must be for Ali, I got a bit choked up.

But you know – I get all into living life through Ali’s eyes, and then I start to feel what it must feel like to see a “celebrity” whom you adore with all your being. 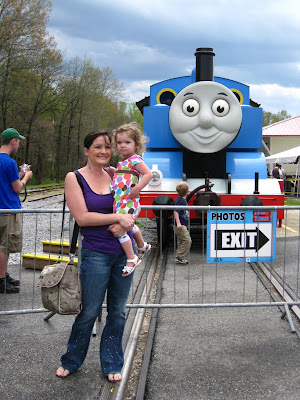 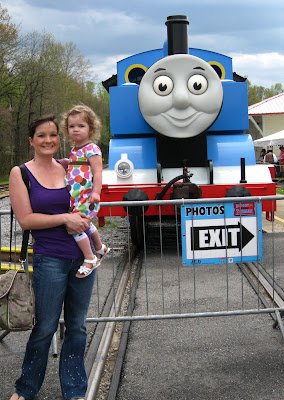 No smiles, AND she didn’t want to go up to him, AND wanted to move away as fast as she could, Thankyouverymuch. 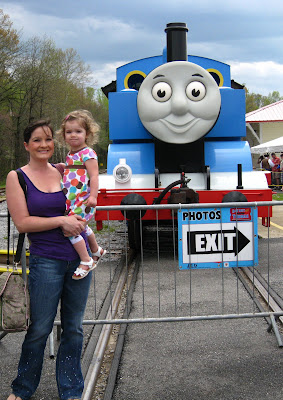 In fact, she was acting rather “I woke up on the wrong side of the crib” all around.

IN FACT, she wasn’t too excited at all. Until she found a PUDDLE to splash in. 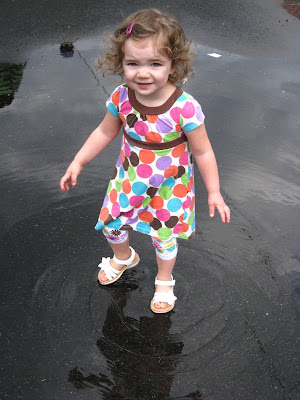 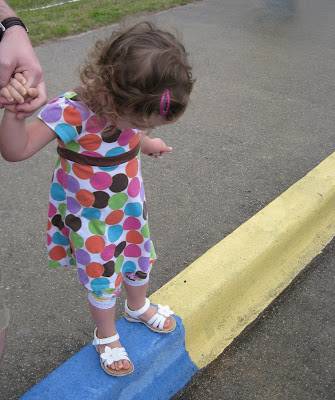 And this is one of those moments that you have to accept the fact that you are a parent of a two year old, and two year olds don’t always do what you expect them to. I mean, I can’t say I wasn’t disappointed that she seemed moody on the day that we had been anticipating for months, but I really tried to get over it and try and help her get out of her funk.

And, of course, in the back of my mind, I also over-analyzed what in the world caused this odd streak of moodiness.

Was she cold? It was chillier than I expected. . . maybe I should have put her in long sleeves.

Oh, the constantly spinning mind of a mother.

At any rate, she managed to rise above her mood after a while and settled into having a good time (although STILL insisting that splashing in all of the puddles was much more fun than any of the countless fun Thomas options). So here was the rest of our Day with Thomas: 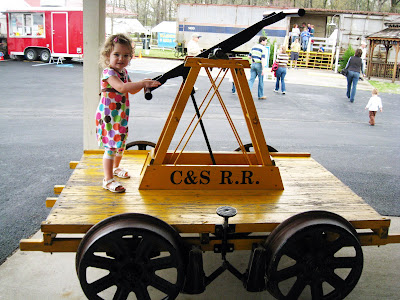 And of course, so did Daddy: 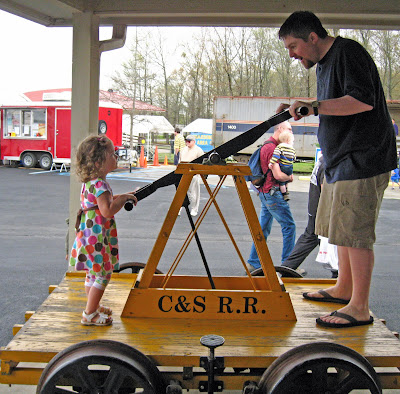 The “big top” of Thomas merchandise really excited her. It was crazy: 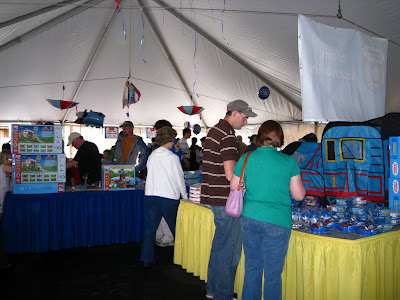 But she loved it. And, thank goodness for two years old, she doesn’t quite yet get the concept of asking us to buy everything for her. She just likes looking. 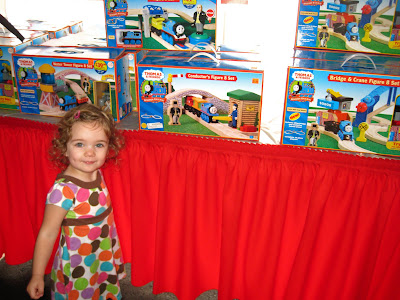 We waited expectantly in line for our 30 minute train ride. She declared that we would be riding on Annie. 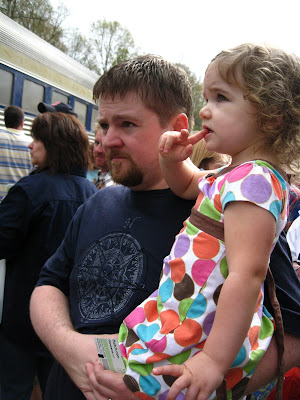 She didn’t let go of her ticket the whole ride. 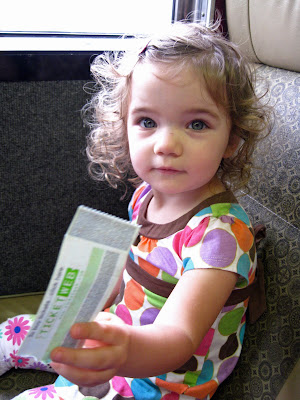 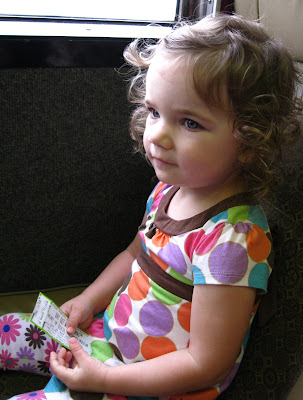 And, of course, the heating vents with the “CAUTION: VERY HOT. DO NOT TOUCH” signs on them were MUCH more fun to sit on than the seats. 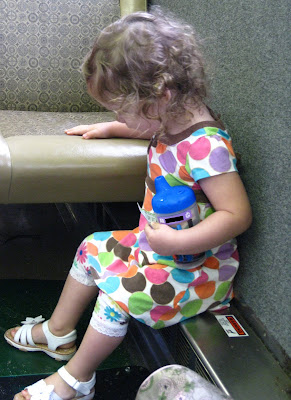 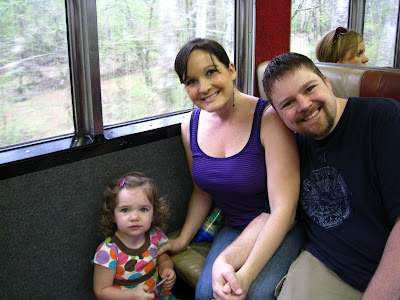 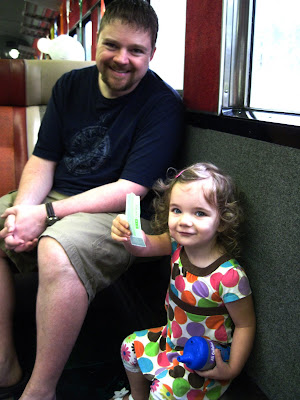 The conductor came around and handed out Junior Engineer Certificates. She couldn’t have been prouder of her accomplishments: 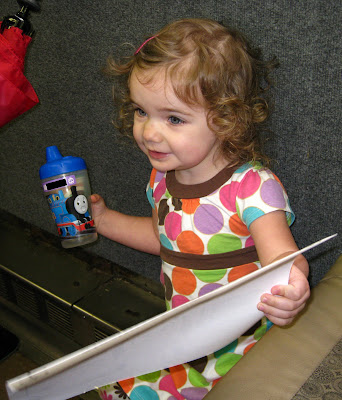 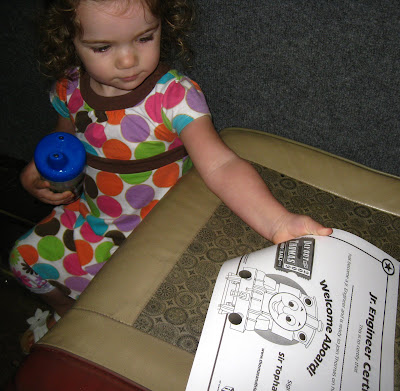 Daddy “Fell Asleep”, which bothered her. She decided that he must need a kiss to wake up. So she laboriously climbed up and stood up while the train rocked back and forth and took her time trying to figure out how to get over to Daddy. . . 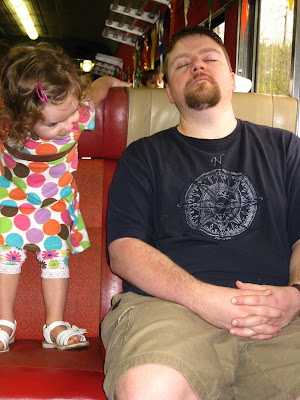 And then only to be surprise-attack-kissed by Daddy right before waking him up! 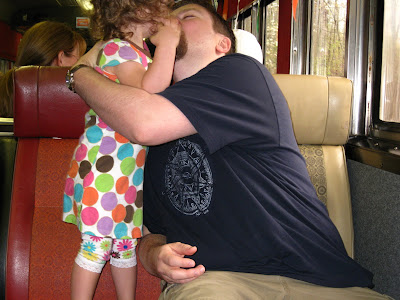 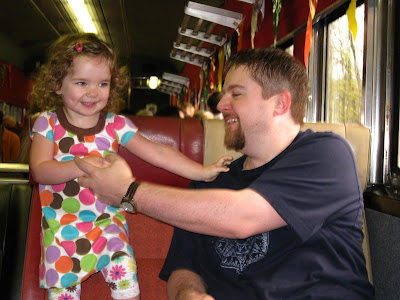 That helped the moodiness too. 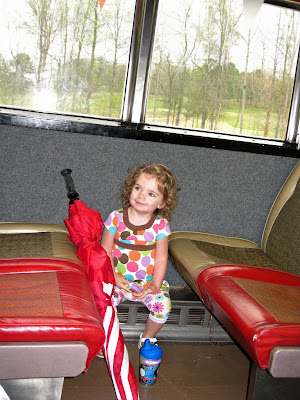 She was a bit suspicious of the conductor. I think that she, like her Mommy, was confused as to why he had a hairnet over his Conductor’s hat: 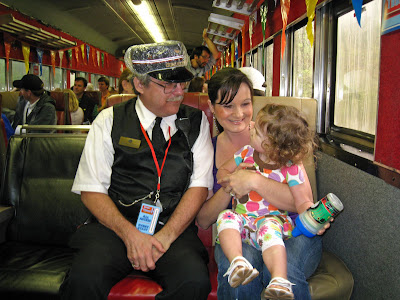 We waited in line to meet Sir Topham Hatt. I was a bit put off that he only came out once an hour. I mean, why can’t the man sit there and see children? How hard could it be? THEN I realized why. Out came this lumbering, cartoonish, apparently-completely-blinded-by-his-outfit character (because he had to be escorted and stood where he was supposed to stand by THREE people). It was quite shocking. As it was to Ali also: 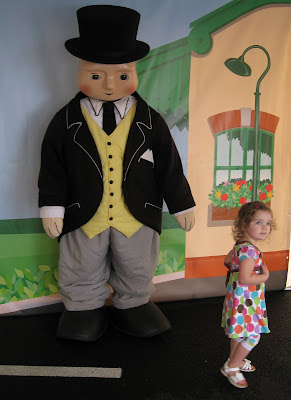 Yeah. She would NOT stand near, touch, hug, or in general take her eyes off of that suspicious character. 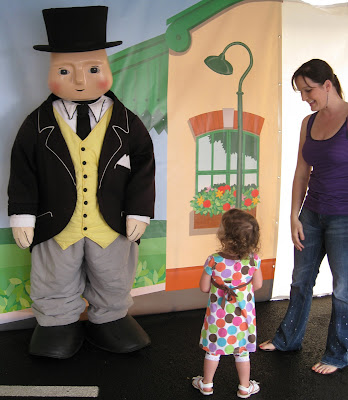 And this was as close of a photo-op that she was going to give us, as she was quickly running away from him: 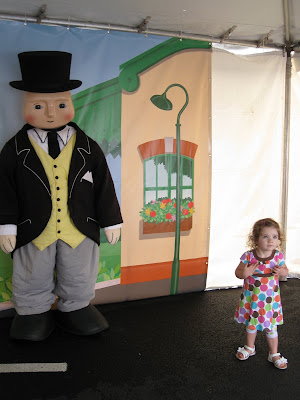 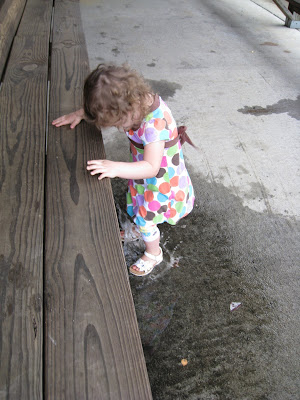 11 thoughts on “In Which Thomas the Tank Engine Drowns in a Puddle.”