I’ve told you about Ali’s odd, yet “creative” ability to see somebody she knows in every picture. And I have also told you about how she asks to go look at our friend’s blogs by name.

A few days ago, these two habits (or more likely “quirks”) converged.

We were eating breakfast at the table together, and Ali was having her juice in an Iowa Hawkeyes cup.

She kept pointing to the Hawk Mascot and saying, “Kinda like Jarrod, Mommy.”

I had no idea what she was talking about, and saw no correlation to the cartooney hawk and Jarrod Jones. She of course sensed my lack of understanding in my response of “yes, honey, now drink your juice.”, and so felt the need to keep telling me over and over with increasing urgency, “Kinda Like Jarrod, Mommy!!”, and pointing to the hawk.

Finally, she realized that I was thick-headed and she was going to have to spell it out for me if she wanted me to understand. She said, “Kinda Like Jarrod’s hand, Mommy.” 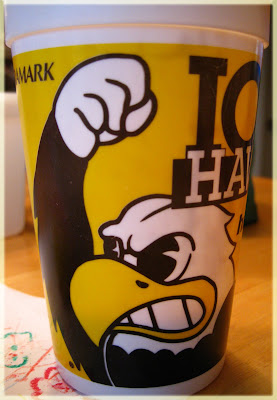 And I finally saw what she was talking about. The hawk had his fist over his head, and when I thought about it, I vaguely remembered that there was a picture of Jarrod preaching on his blog (which she has seen maybe three or four times) where he had his hand over his head.

So I immediately went to his blog to find it, but to make it all the weirder, the pic wasn’t even on his blog anymore!! However, Jarrod was nice enough to hunt it down and send it to me for your comparison to the preachin’ hawk: 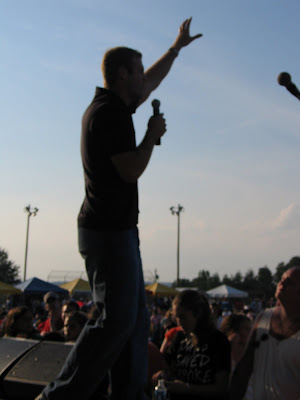 Of course once I realized what she was talking about, I excitedly told her so. She was so very thrilled and proud when I finally understood – as if she had taught me something very, very valuable. 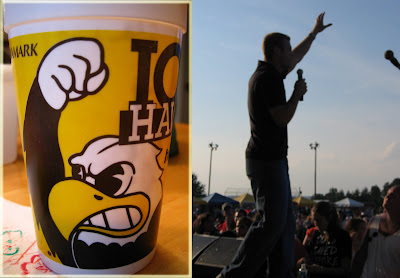 I’m sure that from now on, every time we have juice out of that cup, we will end up talking about Jarrod.

And Jarrod, I’m sorry that you’re a cartoon mascot – I think Kirk got the better end of the association deal. I mean – which would you rather be – Tom Cruise, or the Iowa Hawkeye?

But hey – it’s the thought that counts. And she’s obviously thinking A LOT about you.

4 thoughts on “If I Had Her Power of Association, I Would Have Done MUCH Better on Analogies on the ACT Test. . .”