Last night was Girl’s Night Out!! Pre-Blog Rachel would be saying about now, “I don’t know HOW LONG it’s been since I went on girl’s night out!”.

But, since I am a true blue blogger now, I have the easy reference of looking back and finding out that the last time I went on a girl’s night out, as a matter of fact, was May 6, 2008. And, when I look back to read about it, I see that I that exact sentence at the beginning of the post. Am I predictable or what.

So the plan was to go bowling. We thought that was a pretty “out of touch” thing to do these days (but still super fun for us), so we didn’t make reservations. We just showed up on a Saturday night at 6:30. We quickly learned, however, that we weren’t “un-hip” at all to go bowling on a Saturday night. In fact, there were so many hip people bowling that it was going to be over an hour before we got a lane.

Who knew we were so cool?

So we decided to go to the Starbucks in the Target next door and sit and chat while we waited for a lane.

Two of our party of six had a Little Debbie craving. So the rest of us went ahead and ordered our coffee and settled in.

However, when they came back from buying these, 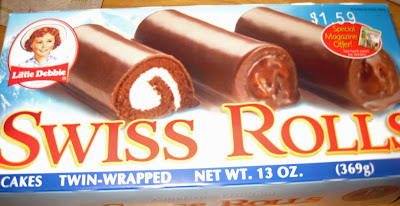 They were greeted by the rest of us with a huge tray of these: 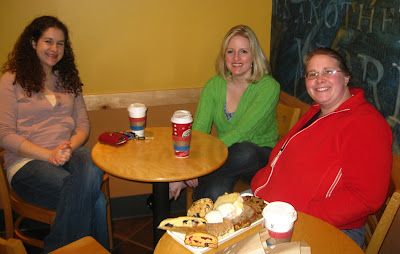 Yes, that’s right. Good things come to those who wait.

You see, the wonderful Starbucks girl (or would she rather be called a barista?) told us that it was time for her to throw out all of her pastries, and although she wasn’t supposed to, would we like anything before she threw it out?

Lydia, thinking ahead, asked for it all.

However, some other patrons came up before she loaded it ALL up for us, but we still managed to score more overpriced-yet-delicious pastries than we ever needed.

So, which would you have chosen? 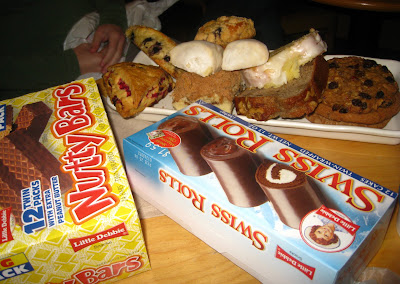 Believe it or not, one of the original Little Debbie cravers (who will go unnamed) still chose Little Debbie. Some people I will never understand..

(By the way, we had a long discussion about why in the world they were throwing out their pastries instead of donating them, but we all remembered this post by Rachel G. which sadly explained why.)

So after we drank coffee and ate many pastries and packed up the rest for our families at home, we headed back to the bowling alley.

Our number was 74, and when we left, the “now serving” sign was on 60. When we arrived back after over an hour had passed, they were now serving 62. One hour, two numbers.

A quick calculation by the accountant of the group (yours truly) gave us a more realistic wait time of six hours, so we could count on getting a lane at 1:50AM.

So obviously, we started discussing plan C. But, as we were deciding on where to go from there, they called 63,64,65, and 66, all of whom had apparently already bailed for their plan C.

So we decided to wait a few more minutes to see if all numbers lower than 74 had moved on.

So we headed to the game room.

Lydia and I decided that we needed to get out some competitive aggression, so we challenged each other to a game of Dance Dance Revolution (affectionately called “DDR” by those of the appropriate age to be playing that game, which would NOT include us).

So here we are, beating every high score that was ever on that machine (you know it): 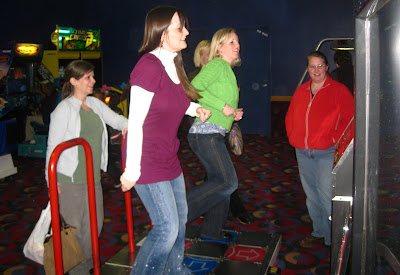 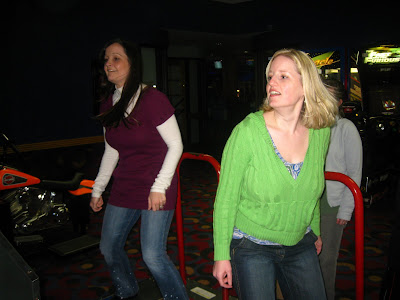 The best part of all of the pictures that were taken is that in not one of them were we doing the same thing at the same time, which was actually supposed to be the case.

At any rate, I won the first and third round, and Lydia won the second and fourth, but beat me in the overall scores…

And you better believe that I got trash talked by her husband at Church this morning.

I’m pretty sure that my reason for losing wasn’t actually my fault at all, but was due to the fact that my character (whom I had no choice in, may I say) had a very, um, uncomfortable looking wardrobe malfunction going on: 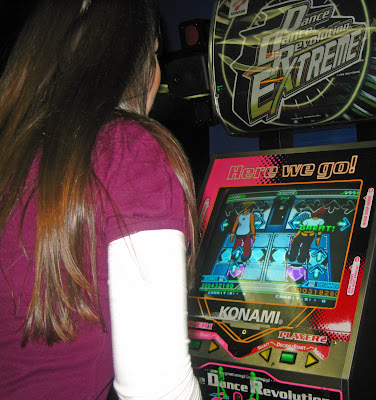 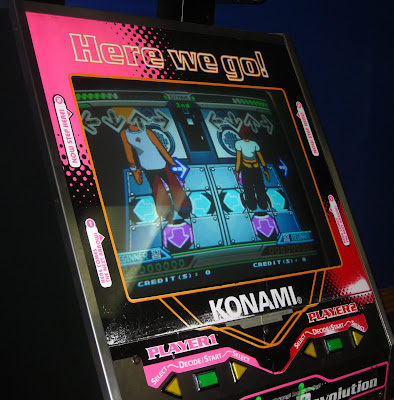 I remember when we were teenagers that our Parents thought it was gross when boys wore their boxers showing. Oh, had they only known how good they had it. . .

So after we played, and while Julie and April played a nice, calm game of Air Hockey, 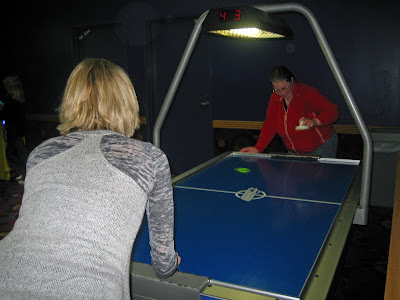 Lydia and I peer pressured the two preggos, Lindsay and Ashley, to get up there and give their babies some dance lessons: 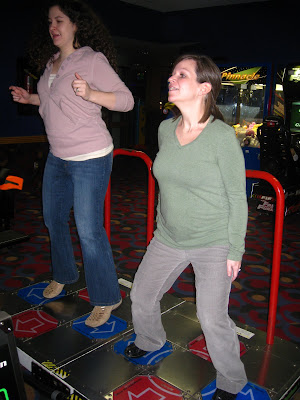 Yes, those babies are going to come out jumping up and down out of sync with each other.

So after having straining all of our aged muscles and working up a sweat, and the number 66 still “being served”, we decided to give up on bowling all together.

But not until I got a picture to share with you of our favorite people-watching sight of the night.

Lydia volunteered to “pose” for a picture near her so that I could do it without being noticed, but then my target politely moved so as not to be in my picture.

So, I decided to pretend to be a total and complete dork and take pictures of the bowling alley as we were leaving, being sure to get her in the very far corner of my pictures.

Because that’s how much I love you.

She had the best teased-hair-sprayed-helmet-hair ever:

I’m pretty sure that she starred in about 46 mid-80’s movies.

And when I was cropping my pictures and came to this second one, I realized that she just might have been on to me:

I was lucky to make it out of there without her pulling out Aquanet from her big gold purse and gunning me down.

8 thoughts on “The Adventures of Just Us Girls”