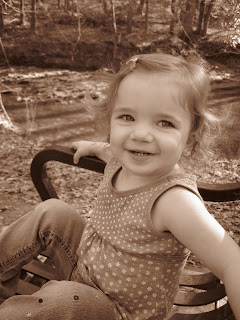 Ali is typically not a very mischievous child. She rarely outright disobeys, doesn’t put things in her mouth that aren’t supposed to go there, doesn’t run away from me when we’re out in public, doesn’t spill things, and is very careful in general.

For some reason, though, she had a very mischievous day on Saturday.

It started out after breakfast. I was cleaning up, and Chris was also in the kitchen. She informed us that she was going to go play Thomas in the living room, so we said okay and didn’t think much about it.

She came back in the room 5 minutes later, joyously proclaiming, “AJ’s!! AJ’s!!”

I turn around from the sink and see that she had AJ’s Christmas present, completely unwrapped, proudly displayed in her little hands.

Now obviously, she knows that she isn’t allowed to unwrap presents without permission, and she also knew that the particular present she unwrapped was for AJ (before and after she unwrapped it). 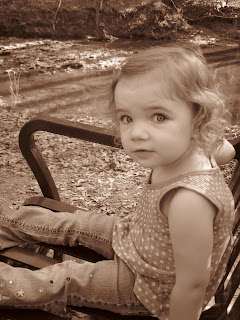 It is one of those puzzling moments as a parent, because you’re trying to figure out what motivated your toddler (as if it was going to be logical or something) to do what they did. Due to the fact that she wasn’t hiding her deed – she was quite proud of it in fact – we couldn’t help but think that she thought she was doing AJ a favor or something. Or maybe the joyousness of opening presents just caught her in a stranglehold and she couldn’t resist.

But of course, she had disobeyed, and so we reprimanded her and explained that she wasn’t supposed to do that and why, etc.

She was very remorseful and apologized to me and Chris and gave us hugs, then went back into the living room. She came back a minute later and said, “Told Oreo sorry too.”

To skip ahead to today for a second, several times throughout the day, she said matter-of-factly and confessionally, “Ali opened AJ’s present.”

Back to Saturday night, her impishness flared again while we were out to eat with Amanda. Chris had gotten Ali some little pickles in a plastic cup, of which she ate voraciously.

She wanted more pickles, and so she was thrusting her plastic cup at me and saying “More pickles! More pickles!!”. I can only hope that her hand got ahead of her coordination, and she managed to splash ALL of her pickle juice ALL OVER my face. Total coverage.

I’m hoping that was some sort of natural beauty treatment also.

It was so hilarious that I couldn’t help but laugh, and everyone else (including her) joined in.

I mean, if you can’t laugh with pickle juice dripping off your face, then life just isn’t worth living.

5 thoughts on “Everyone Needs A Mischievous Day Now and Again.”