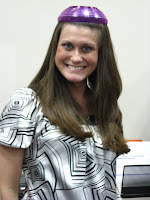 It’s bad when my blog titles are quotes from “Thomas the Train”.

Today was our first day to go to work since Gina started her new job. Despite the fact that Gina spent the better part of her last week’s workdays in tears (and I mean bawling her eyes out, not just a smidge of wetness on the face. I think the guys were starting to get a BIT uncomfortable), I told her quite plainly that Ali and I wouldn’t miss her, because we would still be seeing her at least once a week by going to lunch.

However, I had not given Gina the credit she deserved for entertaining Ali at the office! 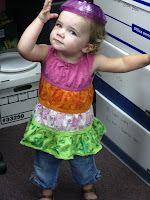 I guess I didn’t completely realize how helpful Gina was in that area. If I needed to have a meeting with someone, I didn’t have to worry about where Ali was headed, because I knew that Gina was watching her.

Today, Mark needed to talk to me, but I kept having to get up and look down the hallway because I would hear the pitter-pattering of little feet take off, and I didn’t know if she had a guardian with her or not. And forget sitting still in Mark’s cubicle – she’s used to going wherever she wants, with Gina close behind!

However, Ali seemed to handle the transition fairly well. She still started talking about Gina as soon as we turned onto the road about a mile from work (for whatever reason, that is the point that she realizes where we’re going), but I explained that Gina now worked somewhere else, and so Gina wouldn’t be there. Ali thought for a minute, then said “OK”, while nodding her head vigorously. However, when we walked in the office, she started her usual scream of “GINA!!” and running down the hallway. I reminded her that Gina was bye-bye, and she quickly changed her focus and started yelling “TIM!! Stickers!!”

Tim moved into Gina’s cubicle (already!!! Who knew that was such prime real estate!?!), but Ali didn’t seem too confused. I think it helped that Tim hasn’t yet changed out all of the stuff in the drawers, so Ali was still able to open the top drawer and get all of her “play purties” out. Hopefully, Tim will leave them for a while.

And, although Ali hung around Tim more than usual since he seemed to take on Gina’s role by being in her cubicle and being the keeper of her toys, he wasn’t nearly the stellar entertainer and babysitter that Gina was. No one could be.

I need a new work babysitter.

And, if I know Gina, this post will make her start bawling all over again. At least the guys won’t have to deal with it this time. Sorry, Gina’s new co-workers.