Quick Note: Be sure to check out “A Dose of Humor” at 5 Minutes for Parenting – today I featured Jen Smithson from Rolling Through Looneyville, One Wave at a Time.

I mentioned earlier this week about going to the Alabama Gulf Coast Zoo, one of our favorite family places to go. And yes, it is where they filmed “The Little Zoo That Could” on Animal Planet a few years ago. It was a miniseries about their adventures of evacuating all 200+ animals three times in one year due to three different hurricanes.

We do love this place. It is so homey and familiar. However, it doesn’t come without it’s perils.

For instance, if you feed animals, a logical conclusion is that sometimes you WILL get bit. We have had three biting experiences – one for each of us.

The First Bite: Chris.
Chris and I used to go to the zoo even before we had Ali. I just really loved feeding the animals, especially this big ole’ guy, who would never bite anyone: 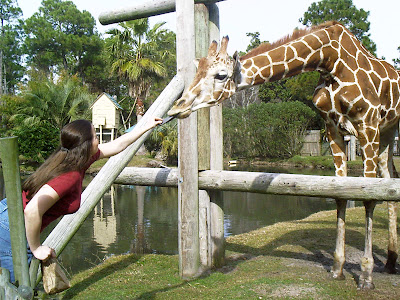 he has since passed, unfortunately.

Anyway, Chris would feed the animals, but he was never quite as excited about it as I was. One of these visits, I was feeding the huuuuuge turtles.

I told Chris “OH! That was so NEAT! He just ever so gently picked up the food off of my hand! You’ve GOT to try it!”.

Chris, having heard stories of snapping turtles, was a bit reluctant, but because of his love for his young wife, decided to give it a try. He timidly put his hand in with a piece of food, and the turtle came toward him. He leaned toward the piece of food, and then in a flash, you could see the thought going through his head as he pondered, “food or finger?” and he dove for Chris’ finger and chomped down.

Chris yells at the top of his lungs.

Being that this was a PETTING ZOO, there were plenty of kiddos around to witness this debacle.

After a couple of seconds, the turtle lets go.

I am halfway between laughing and crying. Laughing because the scene was absolutely hilarious, crying because I feel horribly guilty for talking him into becoming turtle bait, AND because I don’t know if he is okay or not.

He was ok, but he has VERY RARELY fed an animal since, which is why I was so surprised when he fed the teeniest, innocentest goat he could find here.

Bite: The Sequel. Me. When I was VERY pregnant with Ali, we went to the zoo again. My friend the giraffe had been replaced with a pair of camels. Since they were in the same pen as the camel had been in and there were no signs not recommending feeding them (like there are at the tigers and lions – DUH!), I decided to feed the camels. They were fine eating from my hand, but then one of them was especially hungry and decided to nose his way into my cup of food. In doing so, he chomped down on the cup and the hand holding the cup.

Odd, but they have since moved the camels WAY out of reach – actually on the other side of a pond from the walkway!! If I squinted hard enough I thought I could read a sign: “Do not feed camels. They have a special liking to biting extremely pregnant women.”

Ali: The Last Bite.
On Ali’s first visit to the zoo this year back in March, she was standing at the fence watching the ducks. I really should have known better, since the ducks regularly bite our feet, legs, or whatever is in reach trying to get some food (but for the record, they don’t hurt). Ali sticks out her finger, pointing at the ducks, and one of them decided that it MUST be food. 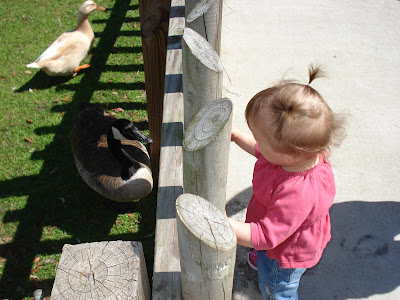 Although it didn’t hurt her, it did spook her from wanting to feed any more animals on that trip (or since, for that matter, although I try to blame that more on toddlerness than on the biting duck experience).

The Perils of Last Week’s Zoo Trip:
We were getting ready to feed our first animals of the trip (and hoping that we could convince Ali to feed one), when one of these guys that Ali looks so sheepish about 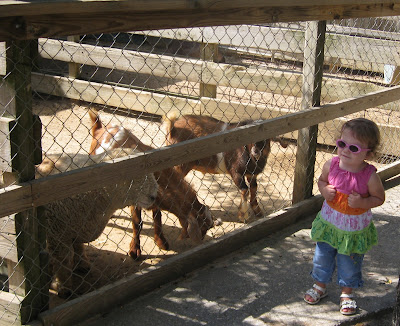 starts peeing and – turning around and DRINKING IT straight from the tap. And it wasn’t just a little bit. It kept going and going and going and going. We stood there, mouths agape, all of a sudden feeling very disgusted at feeding these animals. All the while, Chris is quoting our nurse friend Lydia, saying, “Don’t worry!! Urine is sterile!!”.

But I was VERY glad that Ali still had no interest in feeding any animals this time.

Now hopefully this has portrayed the adventure in going to the zoo, not scared you away from it. It’s a fun place, and obviously we love it or we wouldn’t keep going back for more!

2 thoughts on “The Perils of the Petting Zoo”