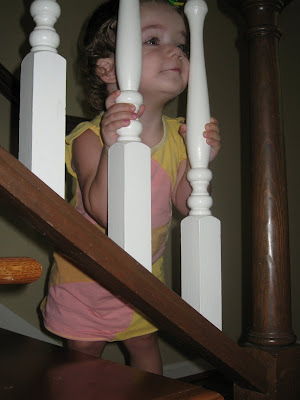 Ali has been a bit down today because, as she has been telling me all day, “mouf huts”. Also, to confuse the matter, a “tummy huts”, a couple “nose huts”, and a few “head huts” thrown in for good measure.

Ali is not one to cry wolf with the “hut” claim. Well, except for when she hurts her arm doing something and so gets a kiss on it, then she wants a kiss on her head too, so she says “head huts”.

Also, to further prove her “huts”, she had a 100.3 fever at naptime (just a couple of hours after some tylenol for all of her hurts), and a 101.3 fever after naptime. Not good.

Oh, and her first ever throw up incident at lunch. It certainly seemed like a choke-throw-up, but she’s literally never thrown up, since the cottage cheesy days of infanthood, so no matter the cause, it was strange.

Needless to say, this has all made her rather sad today. So when she woke up from her nap and asked me “paint piggies?”, I wholeheartedly agreed. She hadn’t asked again since her first toenail painting, and, what better time than when she’s moving rather sluggishly anyway? Obviously, she knows what it takes to make a girl feel better: primping and shopping (which we had done earlier in the day)!!!

I explained the rules again about sitting still and no touching until they’re dry, and she followed them very well. She was still quite mesmerized when I finished her toes, so I offered to paint her fingernails too. She looked at me with wonder and said, “paint fingers??”. Because she’s certainly never seen Mommy’s fingernails painted.

So I told her again that she would have to be VERY still. I started on the first one, and she said “PAINT MOUF????” and puckered up. I laughed. AND simultaneously made a mental note: Fingernail Polish MUST stay out of reach.

However, she seemed to recoup some of her energy and started wiggling around and turning all which-a-ways, which only allowed us to get two fingernails painted: 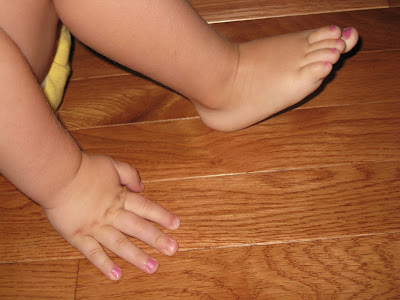 But hey – at this rate, we can have all of her nails painted by Church on Sunday!! Maybe.

Anyway, I’m pretty sure we’ll be taking a trip to the doctor in the morning. The nurse said that I should bring her in, since 101.3 (while on Tylenol) is higher than it should be for teething. She doesn’t have any other symptoms, and so I’m dreading going in.

Reason #1: I am pretty sure that my doctor doesn’t work on Thursdays.

Reason #2: Last time she had an unexplainable fever, my doctor also wasn’t there, and one of her partners had us come back three times in a week, gave her two different shots for two different things, had the nurses do catheters on two different days (which included the most 15 miserable moments of mine and Ali’s life while she couldn’t get it to work right), multiple diagnoses, and he finally admitted that he didn’t know what was wrong with her.

So. Mommies out there: What do you do when your toddler only has a fever? Is it worth taking them in? Any tips on how to make the visit more directed and pointed?

Ugh. I’m not looking forward to tomorrow. I’m just hoping my doctor has changed her schedule to Thursdays since we last went in.

p.s. – Our shopping trip today was for fall clothes at Children’s Place today – they are having a really good sale on fall stuff. We got all kinds of cute stuff!! So if you’re looking to get ahead of the curve and buy a few things at a time in preparation for fall, I suggest going to C.P. this week!