The last few times we’ve been to the beach, I have tried to find a whole sand dollar. Partially for the sport and achievement of actually finding one, and partially because my friend Amanda told me that she always wanted a genuine, found (not found in a gift shop) sand dollar.

I have tried several strategies and times of day to find them, but I have never been able to. However, I have somewhat given up, as I have had no luck, so I hadn’t even thought about looking for one on this trip. Then today, we were sitting in the surf with Ali, and all of a sudden, the tiniest, but whole, sand dollar I’ve ever seen floated up right next to me!! It was so cute. It was more like a sand dime, but it was great!

I carefully kept it between my fingers – it was so fragile! I managed to awkwardly carry it up from the beach while helping tote a baby and a TON of gear. We got back up to the pool where Chris’ Dad was, and I surveyed the scene of all of our bags to find a safe place to put it, to shield it from breakage or from blowing away.

I finally decided on the little pocket on the front of Chris’ Dad’s bag. I gently dropped it in there, just thinking about how happy Amanda would be to have a genuine sand dollar, especially since she couldn’t join us for part of our trip as she had hoped to.

However, as it dropped into the pocket, it broke completely in half. Why, you ask? I have no idea. I was so careful.

I guess the native sand dollar likes to stay elusive.

In other news, I injuriously sleptwalked again last night. Sleepwalking always happens when something stressful happens the day before, because my mind likes to relive it in my sleep. So I was rushing to keep the doors open between the rooms (I guess Ali was shutting them in my dream), but instead, I more like fell out of the bed. I woke up this morning with an EXTREMELY sore arm, skinned knee, and a water blister on my ankle (randomly – not sure how one goes about getting a water blister by falling out of the bed, but I am THAT talented).

Chris had barely noticed – I think bumps and crashes in the night are becoming fairly commonplace to him. He groggily said “what was that?”, and I told him “I was trying to sleepwalk.” He said “ok”, and fell back fast asleep.

We’ve had a great day today – Ali enjoyed the ocean for a while, and then said “all done ocean. bye bye ocean”, and so we went back to the pool. Here are some pics from our ocean time: 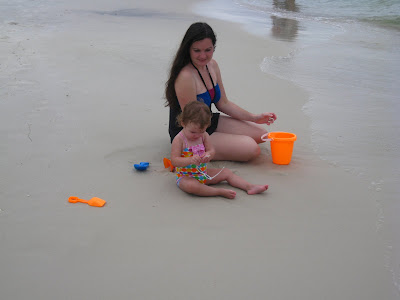 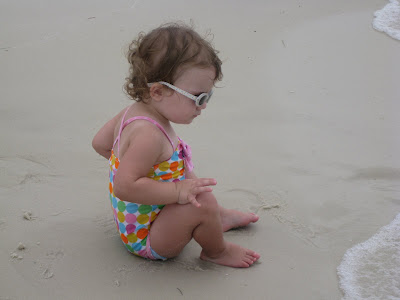 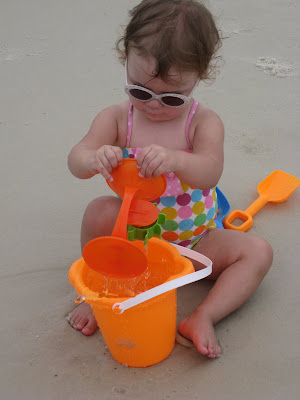 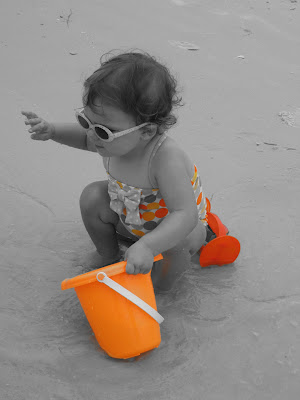 Oh! While uploading photos, I just found out the answer to a confusing visual we saw a bit ago. Chris and I were looking off the balcony, and there were about 6 men and a little boy headed for the dunes with a professional photographer. They all had the typical white linen shirts and beige shorts on. BUT there were no women!!! We were speculating what in the world would motivate a group of GUYS to do that. I don’t think a typical conversation before a bachelor beach trip is “don’t forget to bring your linen shirt and beige shorts so that we can get our annual beach reeds photo together!!!!”

BUT Chris just text messaged me (from the pool with his Dad) and told me to look out the window because a wedding was happening on the boardwalk. They were the GROOMSMEN and the RING BEARER!!