So my Father-In-Law said that he’s been at this hotel this week every year for the last 8 years, and has never had security called on him. And (according to him), that’s a big deal.

Plus, the one-man-band that has played at the pool for the last 256 years informed us that earlier this year when Kid Rock stayed here, K.R. didn’t get security called on him, either. And (according to me), that’s a big deal.

However, my 19 month old daughter did.

Before you get too worried about what we’re doing down here, we were the ones who did the calling.

We were trying to get ready to go to the pool this morning, scurrying around and picking up floaties, sunblock, sunglasses – you know how much gear it takes to take a toddler to the pool.

We have an adjoining room with Chris’ Dad, and we’ve been leaving the doors open between the two since we got here.

All of a sudden, we hear a very soft “bye bye”, then a shutting door. At first it didn’t register, since Ali is really into shutting doors, and so this scene happens all the time. Then Chris realized that she had just gone in Chris’ Dad’s room and shut the door ON HIS SIDE behind her.

Now, if you’ve ever stayed in hotel adjoining rooms, you know that the doors are 100% to the option of each room, meaning that you have no way of opening the opposite door. And we had no key to his Dad’s room (something I had been saying we needed to get all weekend but we just hadn’t remembered to ask his Dad for. At least my Motherly instincts weren’t COMPLETELY on the fritz.)

Now, let me say that Chris’ Dad’s room isn’t exactly child-proofed. It has, after all, been a few decades since he’s had to think about such things.

So we hear her walking around and exploring, perfectly calm and happy. I frantically tell Chris to call security. I calm down and am okay, thinking that surely she can’t get into anything TOO bad before we get to her. Chris, meanwhile, is freaking out.

I talk her back to the door and try to get her to turn the doorknob (which of course she can’t do yet, but a Mom can hope that this would be her first time!). She plays with the doorknob for a few seconds, then I hear her wander off again.

Chris panickingly tells me to get her back to the door and keep her there!! So I call out to Ali and tell her I have candy. Realizing this ruse wouldn’t last long, I found some M&M’s on our dresser and started shoving them under the door, trying not to think about how dirty the threshold carpet is.

I never hear her come back, but I’m still okay, thinking she can’t get into anything. Then I hear her start coughing, and am just imagining what sort of peril is causing it. I panic.

I tell Chris to call down the hall for the maid and ask her to let us in since security is taking too long.

He goes and gets the maid, and she tells him very sternly, “OK, but next time you call security!!” He explains that we did, but they’re taking too long. (I assume that she’s been threatened within an inch of her life not to let people into rooms).

As she’s opening the door, security comes up. Let’s hope she didn’t get fired.

Chris runs in and scoops Ali up, and I meet them in the hallway. Her mouth is STUFFED full of something. I start squeezing her cheeks and asking her to spit it out, and I get a handful of half eaten M&M’s. Note to self: even when you think it doesn’t, candy bribes always work.

After inspecting the room, it looked like all she managed to get into was taking his trash bag out of his bathroom trash can and dragging it to the middle of the room. All else seemed untouched.

And, needless to say, I now keep a room key to Chris’ Dad’s room in my back pocket.

Here’s a couple random pics from the day for those of you who INSIST that I have pictures on every blog:

Ali was no longer satisfied with just HER glasses on her head. Now she has hers AND Daddy’s on her head! And proud of it! 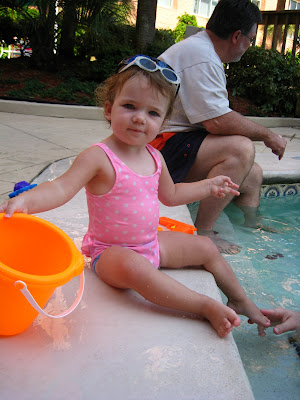 We went to G’Pa Leo and G’Ma Kitty’s to check out the new pier. 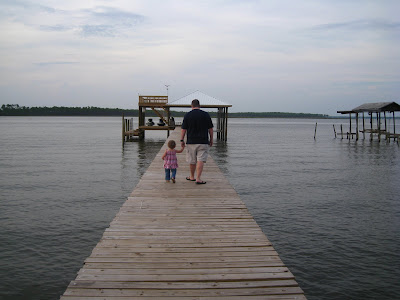 From the top deck: 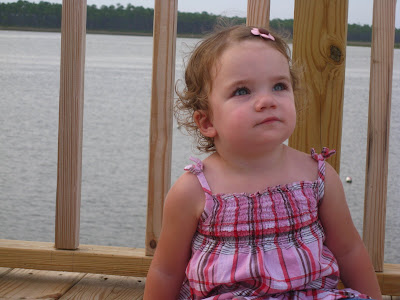 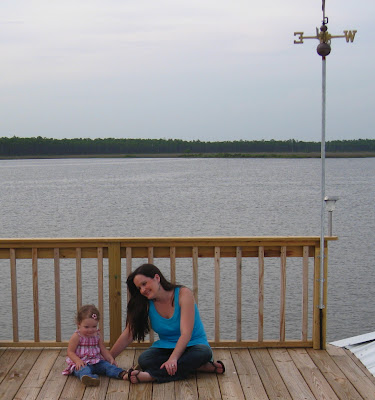 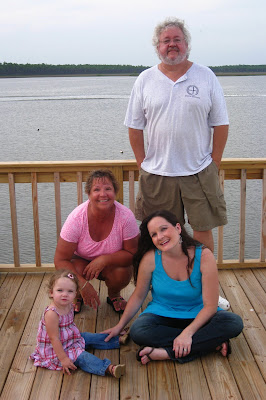