We had a great time at the zoo with the Pierces today!! It was fun to go with a family that has a three year old that appreciates the zoo even more! And, the zoo finally opened the Spring exhibits!! You can now go to the Kangaroo Kountry and the Butterfly exhibit.

At the Kangaroo Kountry, one of the male zoo workers was rocking a baby kangaroo in a rocking chair – I mean a teeny tiny BABY, one way too small to leave his mother’s pouch. He was explaining to the kids that since this baby doesn’t have his mother, he IS the kangaroo-baby-momma. He was wearing the little guy in a pouch, and he said that he has to wear him all day, wake up every three hours and feed him during the night, carry a diaper bag around with him, and the worst part is that since he wears the baby in a cotton pouch all day, he has to, umm, make the baby use the bathroom after every meal to prevent getting wet on. . . or much, much worse. Apparently real kangaroo momma’s do this by licking their babies, but hopefully he’s not going to quite that much of an extreme. All of that is quite a daunting task, and I was impressed that a male zookeeper took it on. It seems like it would be easier for a woman to do it, seeing as we have that maternal instinct. He said he’s learned a lot about being a Momma – like how to bend over to get something without dropping his baby out of his pouch, how to do things while holding his baby, etc.

I think this guy has good potential to be a really good Daddy to some kids one day – pretty sure he was single. Hmmm. . . who should I set up with him?? :) If you’re looking for a good guy who apparently likes taking care of babies, why not visit Kangaroo Kountry?
Here’s some pics of the baby Kangaroo and his baby-momma: 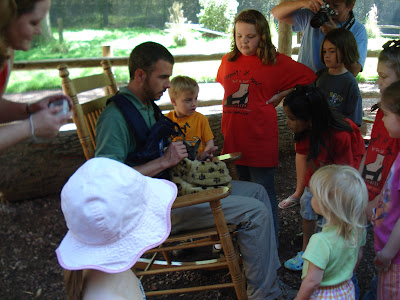 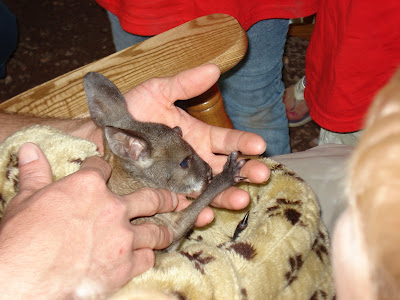 Bonus picture! Here’s a fun picture I took of the Giraffes: 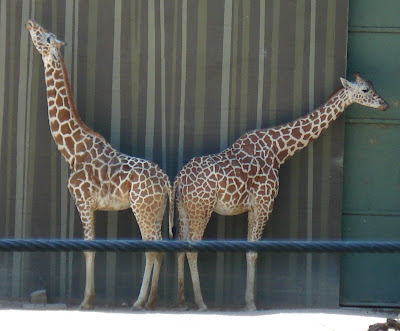 Coming soon: Tonight Ali is having her first ever spend-the-night company!! AJ is spending the night, and I am sure it will be much fun! Be sure to check in tomorrow for lots of pictures and I’m sure a story or two of our adventure.