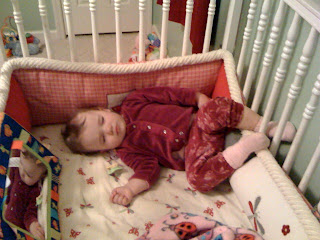 ugh. So Ali definitely has an every other week pattern thing going. This week is bad nap week. Last week was AWESOME nap week. Two weeks ago was bad nap week. Hopefully next week will be good nap week.

Every other week I think it’s time to drop her morning nap. Then the next week, she takes 2-3 hour morning naps and still takes a 2 hour afternoon nap!!
So on bad nap weeks, what happens is that she says she’s sleepy (nie nie), and is just fine to put in bed (like always), but then just doesn’t fall asleep. She talks to herself, runs her paci along the crib rails like she’s in jail, sits up, stands up, etc etc etc (everything but fusses), but doesn’t fall asleep. Every 30 or 45 minutes, I’ll go in there and tell her to lay down and go nite nite, and sometimes that does the trick. But if that doesn’t work, I do have one secret weapon. It sounds worse than it is: scaring her to sleep. I go in her room, tell her to lay down and go nite nite, then close the door as if I’ve left. I sit quietly and wait . . .for her to start talking or to sit up or to stand up, then I say “no, lay down and go nite nite”. Oddly enough, this works every time – she nearly immediately falls asleep (and no, she doesn’t cry from me scaring her). I know it sounds extreme, but she NEEDS to sleep. If I give up and get her up, she’s exhausted.
Anyway, hopefully she’ll get out of this circular schedule soon.
Is it normal to have a good nap, bad nap weekly schedule?