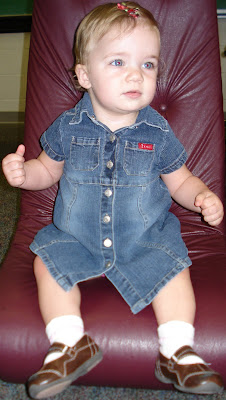 Yup, that’s my girl. She thinks that it’s much more important to talk than to walk, and the Dr. Amy Albert IS ok with it! She said that she is talking more than most 18 month olds, and obviously has no motor skills issues, so she is not worried about her not walking yet in the least.

Ali said “Cracker” not long after the doctor got in there, and she said, “wow! she says two syllable words?” and I said, “um, yeah, she says three word sentances.” She was shocked. I think that helped her say – she’s fine! :)

For all the other mommies out there, here are her stats (I know this is boring info for most people):

Ali did well with her shots – she only cried a minute. She definitely remembered the doctor’s office, but she did very well over all!

We went and visited with AJ after the doctor’s office, and they were SOO excited to see each other! It had been over a week since they had, and they had both been talking about each other all the time. Everytime they play together, AJ laughs at Ali crawling and gets down and crawls as if she is making fun of her. Too bad peer pressure doesn’t seem to have any effect on Ali!! :)

1 thought on “communication over transportation”