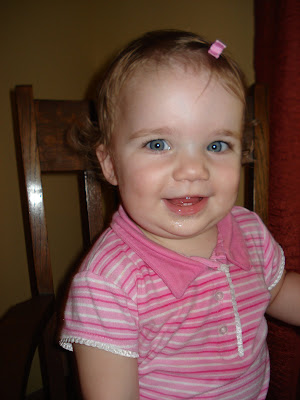 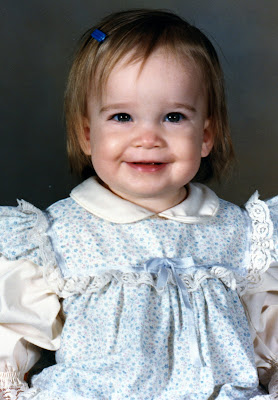 She was so early at everything else, especially crawling. She started cruising very early. I remember my dad saying “look at her go! She’ll be walking by Thanksgiving!” Ha.

She totally could. Totally. She just won’t.

Sunday, she gave her very first inclination that she just MIGHT be interested – she was standing up holding onto something and let go and just stood there (perfectly stable, because she could TOTALLY walk!!) for about 10 seconds, then reached out and grabbed something again. Yesterday, I got her to do it one more time, but then she refused for the rest of the day.

So tomorrow is her 15 month visit, and being the objective person I am, I have worked out all of my logical arguments to the doctor as to why it’s just fine that she’s not walking yet (at 12 mos, the doctor told me she needed to be walking at 15 mos). Obviously, she is more of a vocab child than a walker. I counted (again, being objective here), and she has 92 words (that I’ve remembered to record), 12 two word sentances and one three word sentance, most of which she uses quite often. She talks constantly, she understands intricate vocab things that I would NEVER think she was old enough to do – such as properly changing pronouns (ex: me: “are you giggly?” ali: “i giggly!”, or me: “you did it!” ali: “I did it!!”), and she understands almost everything I tell her to do and follows instructions very well.

My other justification, of course, is that she could TOTALLY walk if she would try. She walks perfectly holding onto one finger – she just refuses to even try to see if she could do it on her own. So I am anxious to see what the doctor says.

Another important thing about 15 months is that it marks the day that if I were to get pregnant (accidentally, at this point) at or after this point, our kids would be at least 2 years apart. I don’t know why that feels more sane, but for some reason it does. So we have made the 2 year marker!!! Whoo hoo!