Yesterday as we were leaving a hike at Ross Bridge, there was an extraordinarily tiny bird hopping after Luke, one of my kid’s friends, as he got in the car to leave. I found the bird’s actions strange, and Ross Bridge Parkway is a busy place for a strange bird, so we got out of our car to check on him. Noah, with his typical 9-year-old boy no-holds-barred enthusiasm, ran up to the tiny birdlet. But instead of startling or flying away, the bird just enthusiastically hopped around Noah’s feet, presumedly saying “are you my Mommy?”

So of course I assumed the bird was hurt. One does not simply “hop” around a human.

I asked my other friend, Ashley, who had just driven up to check on the commotion, if she had a box in her car – I would take Birdlet to the Wildlife Rehabilitation Center at Oak Mountain.

She offered me a Chick-Fil-A drink holder, which seemed like asking for a bird-hopping car adventure. But I presented it to Birdlet anyway, and he hopped right in.

Then he hopped from it up onto my arm.

Then down my back.

Then onto the children. 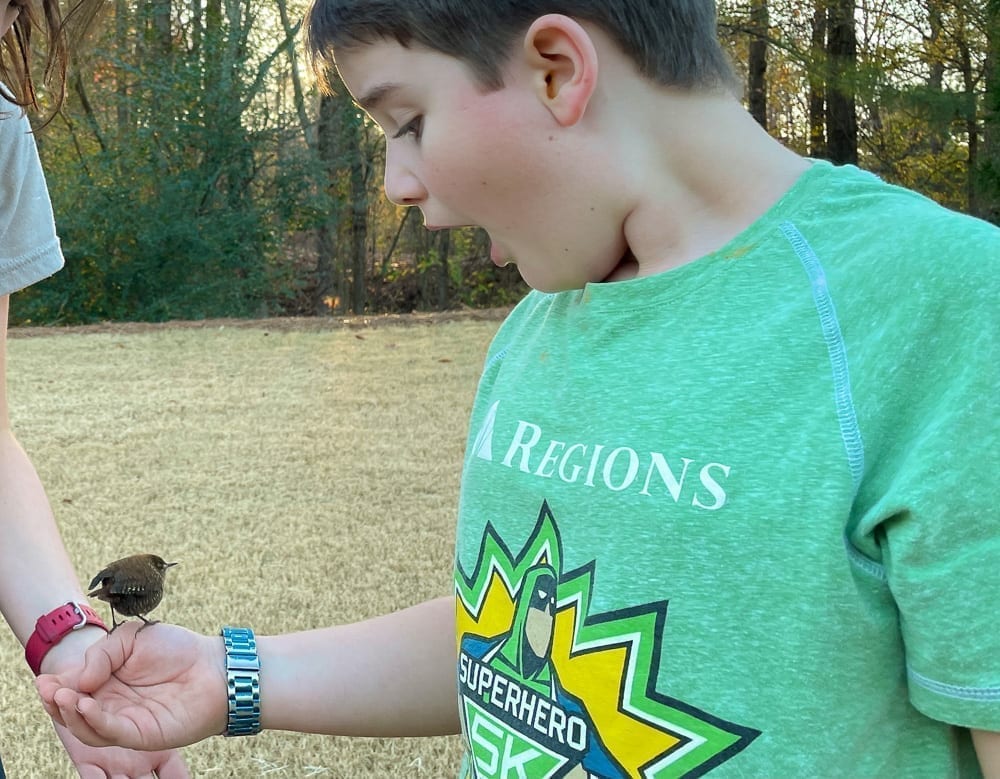 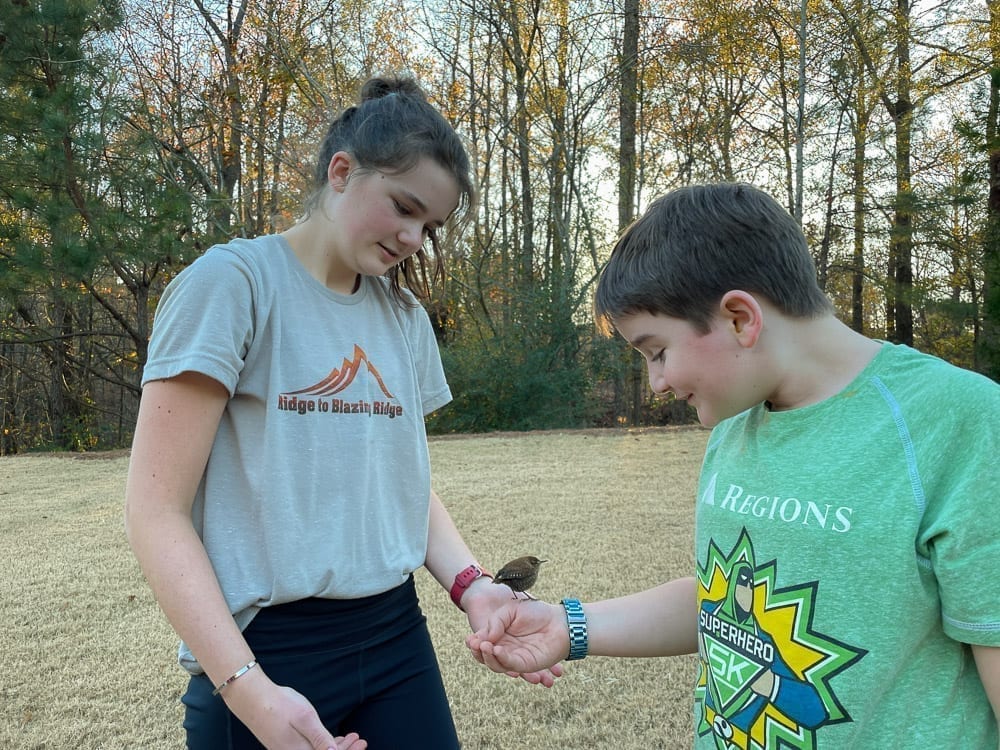 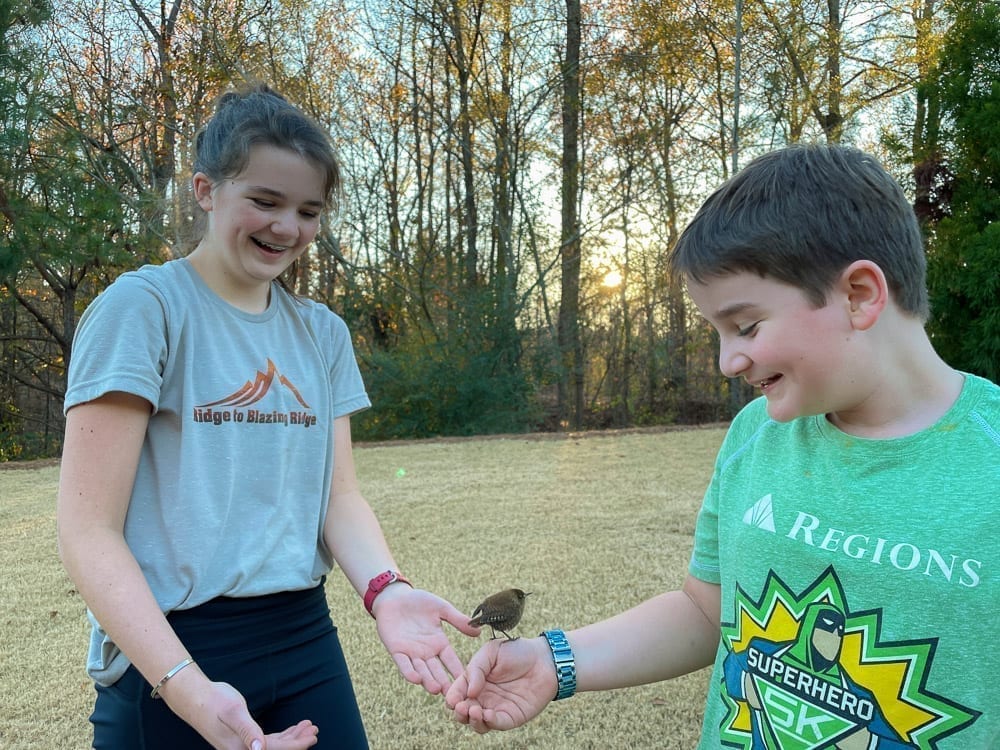 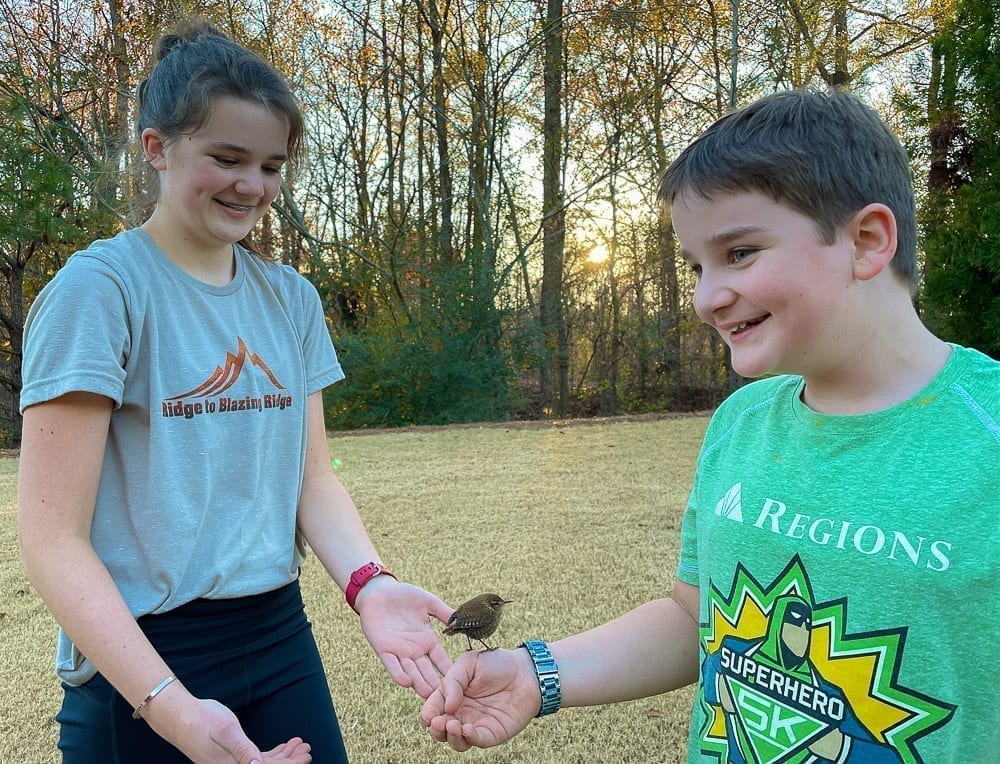 Obviously they were thrilled with this turn of events, as seemed the case for Birdlet, hopping from child to child like they were the best friends he’d always hoped for.

Meanwhile I was just puzzled. He didn’t seem hurt, but he definitely didn’t seem…normal. What the heck is the bird doing? Does he need rehab or not? Perhaps I shouldn’t be so stringent with my bird behavior normalization. But Ross Bridge Parkway is a busy road!! It’s not a good place for overlovable birds to hang out!

Ashley found a big plastic container, which Noah took and stabbed holes in the lid for air, and we mentioned the rehab center again.

At which point, apropos of nothing (except the mention of rehab), Birdlet jumped off of Ali and expertly flew away into the woods. As if the love potion had worn off and he was back to being a normal, aloof, woodland creature.

(Either that or Cinderella called and said she needed help with chores.)

I said “Well. That answers that question.”

Noah said “At least we helped him face his fear of flying.”

And I’ve had Amy Winehouse stuck in my head ever since. Because if it wasn’t about Birdlet, it’s about nothing at all.