Sometimes people ask me how I know what all my kids need to learn in their homeschool education. “How do you make sure there’s not a gap in their learning, or be assured that you didn’t forget anything?”

Since I was homeschooled, and know very little about the pre-college group education scene myself, I suppose I could ask the same thing back – how do you know your kids don’t have gaps? My Dad was sick a lot in the fifth grade and totally missed fractions – but was an absolute genius in the construction, mechanical, and art genres without them. (Fractions are totally redundant, apparently.)

But, if we’re being honest, there were gaps in my education.

For instance, I somehow made it to the ripe age of 17 before I had ever heard the word “turd”. It’s not that I didn’t know much worse stuff, but somehow that particular word had slipped through the cracks. When my boyfriend/future-husband used it for the first time in my presence, I actually had to inquire as to its definition, and it took me more years than you would think to find where it went in the order of profanity – somewhere between “silly” and “butthole”, I think – but I could be wrong. I believe that being able to line up all the words in order of badness is one of those developmental processes that once the age passes that you’re supposed to perform that cognitive task, you can’t get it back. Like learning to skip. Or speaking eight languages.

So yes, sometimes there are gaps.

Thankfully, sometimes other kids fill those gaps in for your kids, and it’s always amusing when you find out, via another kid, where your kid’s gaps were.

Last Wednesday was one of those gap-filling days.

We took one of Noah’s friends, Levi, home with us between events for a little while, and in the car on the way home, Ali, who incidentally was in the process of turning thirteen that very day, was delightfully narrating a made-up choose-your-own-adventure for the two boys. Ali was choosing Day One of Thirteen to prove that teenagers were amazing and she wasn’t done enjoying entertaining her brother and his friends yet. 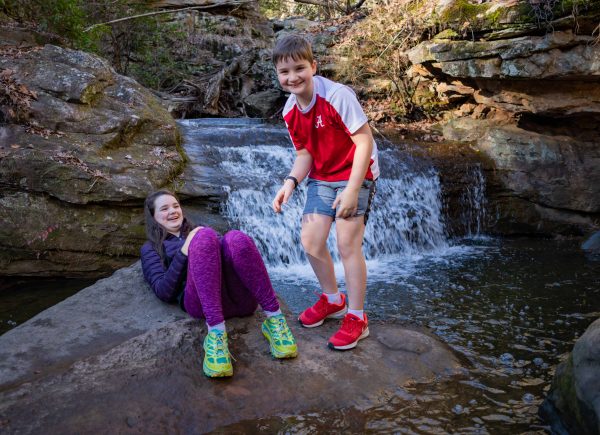 Ali: “Levi. You just came up to a bridge over a river or a normal path. Do you choose to walk across the bridge, or the plain path?”

Levi: “I choose to walk across the bridge.”

Ali: “You got to the middle of the bridge, but there was a troll under it. He just jumped up onto the bridge and is blocking you. What are you going to do?”

He started screaming with cackles and repeatedly saying the phrase over and over. Like me at 17, he knows much worse things – he knows all the biggie words and we’ve had The Birds and the Bees talk. But the melodic beauty of “kick ‘im in the nuts” was clearly a first-time experience for him, and I as his mother was nearly as happy to get to witness this developmental milestone as I was his first steps. Except oh yeah – I wasn’t responsible for Noah or Ali’s first steps so I didn’t see either of them. But at least I got kick ‘im in the nuts.

Fifteen minutes later, while in line at Chick-Fil-A, this was the toned down version of his ongoing mirth over this amazing phrase:

(Note A: We were also behind a car with a BUTS sticker on it, which is the name of our local trail running club – Birmingham Ultra Trail Society. Hence the “butt” in front of us.)

(Note B: That was newly thirteen-year-old Ali trying to calm them down. While her much more mature mother was sneakily recording the entire thing.)

I cannot explain to you the level of joy that Levi gifted my son with that day by teaching him such a useful tool, and I will be eternally grateful for his filling in the gaps of my educational system.

And, on the way home, Noah offered in-kind information to Levi, because we in the homeschool community work together to help each other.

Noah: “Do you know about the Wright Brothers?”

Levi: “What were they right about?”

Noah: “No, they’re dead. You can’t meet them. But they invented the airplane.”

Although I’m sure that Levi would have learned about the Wright Brothers soon enough on his own, I feel like this was a completely even informational gap-filling trade. But in Noah’s mind, Levi definitely brought more to the table.

Epilogue: Kicking the troll in the nuts did not work. The troll told Levi a riddle, which he got wrong, so the troll ate Levi. But thankfully, trolls eat humans whole, and Levi caused a bit of trolly indigestion, and so the troll threw Levi up and Levi was able to make an escape, albeit a bit covered in Troll Bile. The moral of this story is: trolls don’t have nuts. Or it was a girl troll. Or I guess we don’t really know enough about this particular troll situation to accurately draw out the moral.

5 thoughts on “The Calamity of Educational Gaps.”