This past weekend, while on a hike, Ali and I were talking about our Hiking Club Summer Bucket List. I told her I’d asked the other moms what they’d wanted to do this summer, and asked her what she wanted to do.

“Okay! We can do that sometime this summer.”

“Actually I want to do it as soon as possible.”

It was supposed to be a pretty week and I’m a total enabler when it comes to a gorgeous hike, so I checked with our hiking club, warned that this was going to be the most we’d ever done and please only consider your oldest children for the hike, and began gathering supplies.

(A ten mile hike is no joke – especially when you’re going somewhat slow. You’re talking hours on the trail, and it requires water and snacks and provisions and probably a few band-aids.)

But somehow we got it all together AND convinced a few friends that this was a good idea in less than 48 hours, and on Monday morning, we met at Oak Mountain ready for the hike.

We can do this.

I mean, maybe. Who knows.

We started out from the top of the ridge so that we didn’t have to climb any serious mountains, and gazed down from the cliffs at Peavine Falls, the bottom of which would be our glorious ending point. 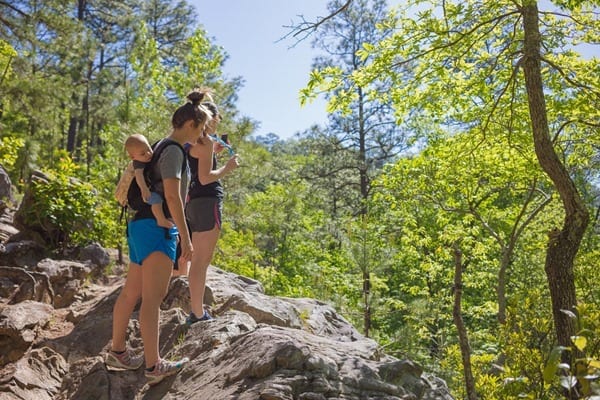 The first few miles were lovely and uneventful – the white trail at Oak Mountain is one of my favorites, as it is full of wildflowers and also runs by a stream. The peacefulness is on point.

When we got to our first trail crossing at 3ish miles, we decided it was time for snack. And also there was a good rock and fence post for a group photo – I could put my camera on the post, control it with my phone, and actually be in a photo. I didn’t know Noah dabbed right out the top of the photo, and I also wasn’t doing a good job hiding my phone. But it’s as good as a trail group photo gets. 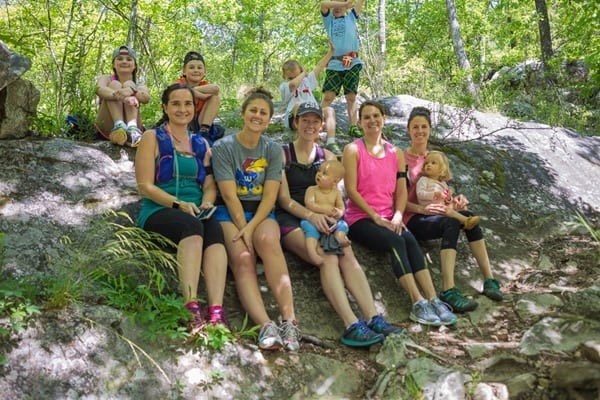 This is the last photo. 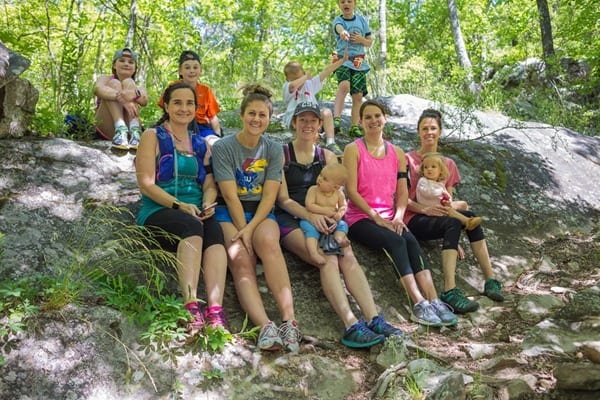 Notice Noah’s dab has morphed into a point-and-scream. But the rest of us haven’t changed a bit. Because his screams of “SNAKE!!!!” and pointing at our feet hasn’t made it to any of our brains yet.

(I don’t know how dabbing helped Noah see this unbelievably camouflage snake, but I will never complain about dabbing my pictures up ever again.)

A baby timber rattlesnake was somewhat perturbed at our rowdying up its rock, and had crawled out in a huff, then a minute later curled up in a ball and had his head up showing his decisively bad mood.

(I took pictures, of course, but as many people do not appreciate my snake photography, if you specifically want to see our one-rattle baby friend, you can click here.)

We moved on quickly. We weren’t sure where his family lived, and since he was already so extremely irritable at such a young age, we could only imagine how special his mother’s moods must be.

Our next finds were much more amenable to our attention and presence. Or at least they didn’t have man-killing venom waiting to share, so we enjoyed their company a little bit more. 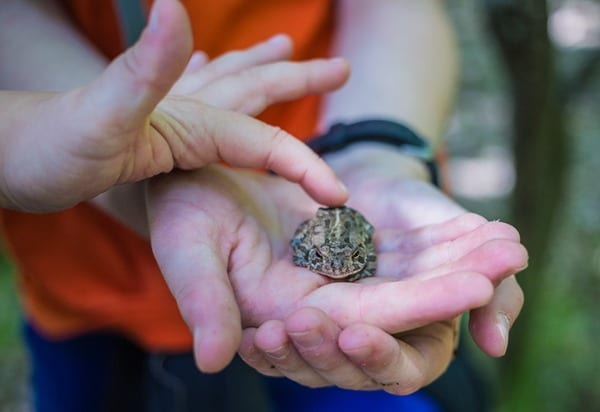 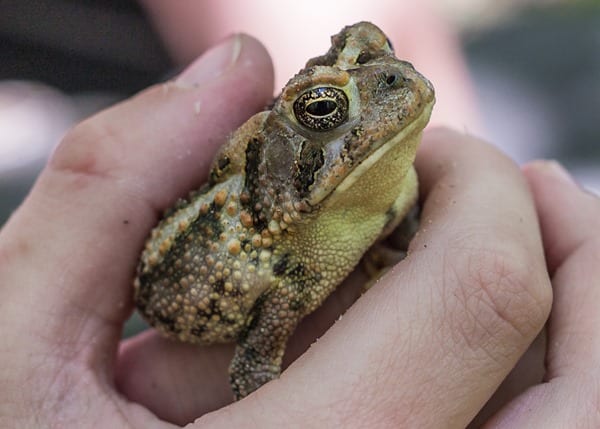 In total, we found six toads (and only two peed on us), and this lovely dragon-esque Fence Lizard – note how his belly glows blue. 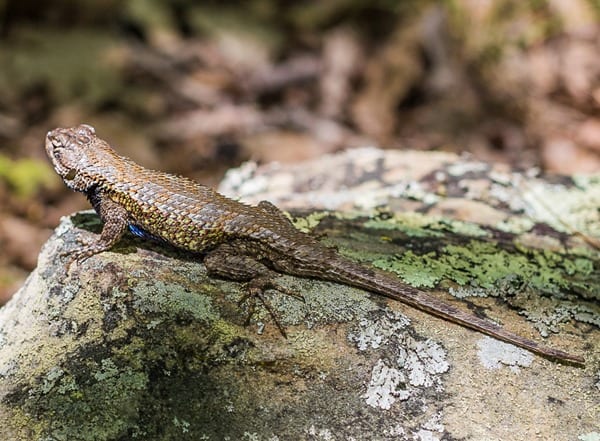 He definitely had some leftover prehistoric fire and scales.

We kept moving, through the reeds, enjoying all of the vastly differing views of Oak Mountain. We took a couple wrong turns – one that was clearly the map’s fault, and the rest were most likely my fault. 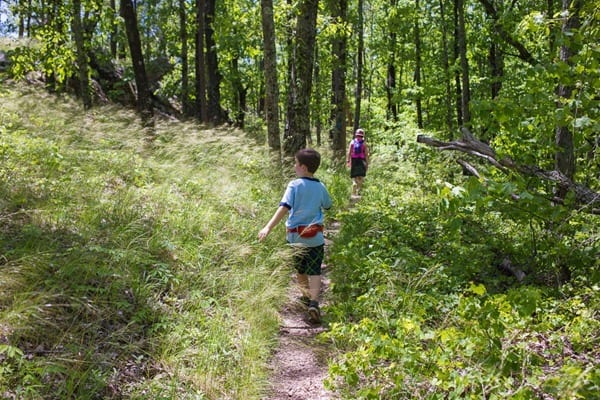 …And I did a hiking club first and fed a baby a bottle while walking through the woods. 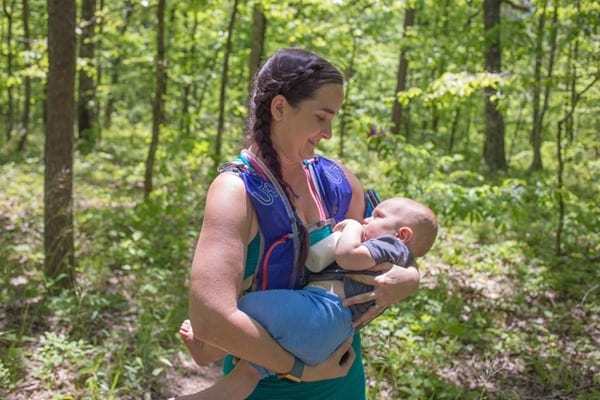 (For the record I was never a chill enough baby mama to hike with a baby. I am constantly amazed that Sarah is totally that person.)

We finally got back around to the Peavine Falls area. The original plan was to hike an extra half mile to come into the gorge from the side we were familiar with, and that was slightly less steep. But everyone was tired, we were already at 10 miles, and a shortcut is a shortcut is a shortcut even if it leads out with a sign like this. 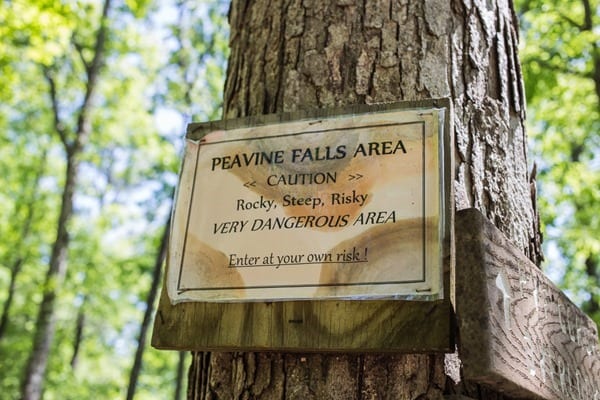 We followed the path down, but it looked just a bit off from what I thought should be there. We reached what should have been Peavine Falls, but instead it was a chute – a gorgeous, flowery, chute of water that was dying to be intertubed down, if we were slightly more daring than we actually are, and also had an intertube. 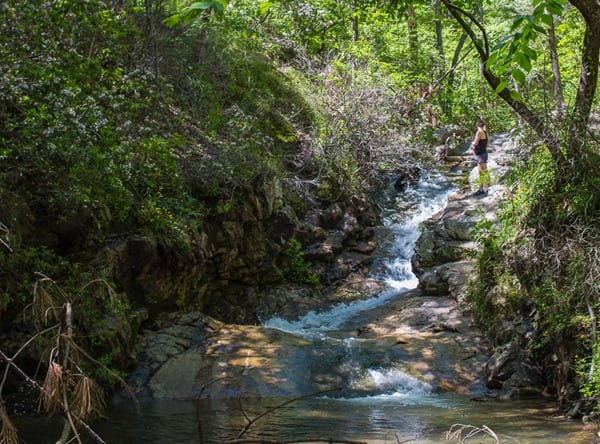 I made the executive decision that the kids should play in the water while I tried to figure out where the crap we were. I didn’t know if we were upstream, downstream, around a bend, or exactly what from Peavine Falls, and I needed a minute.

The kids were happy to oblige. 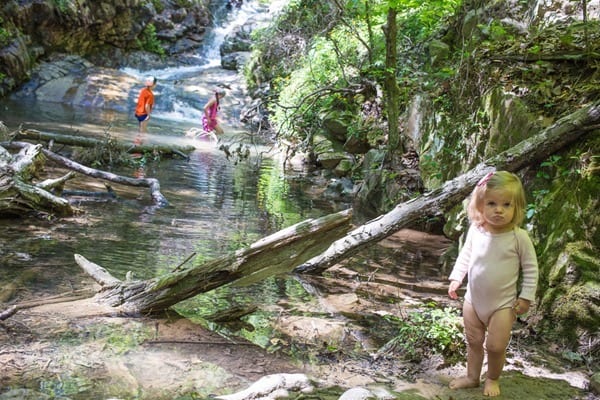 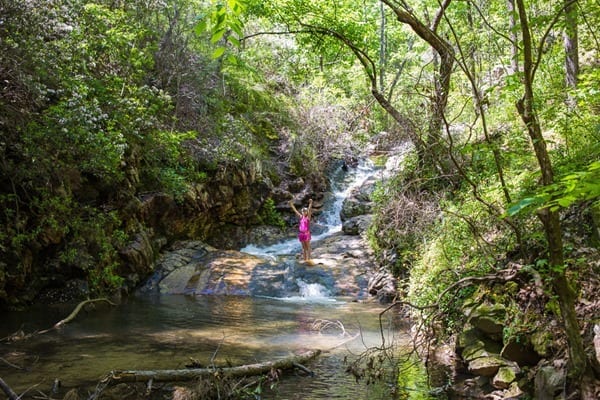 With some frantic texts to Chris and the studying of my exercise map on MapMyRun, I finally reached the conclusion that we were just *barely* downstream of Peavine Falls, and clearly I’d singlehandedly discovered Peavine Chute, which wasn’t so bad.

We slowly made our way up the trail to the falls, at which point all of us mothers were thrown back at once by a smell.

I looked around frantically. And then I saw it.

A group of hammocks, some wandering-slowly people…a zombie-ish look to the place.

I scouted ahead to check it out.

It was, it seemed, a portable artist enclave. There were painters. There were aerial ropes with people hanging upside down. There were emotionless men with Hawaiian shirts hanging open. And there was a LOT of smoke. 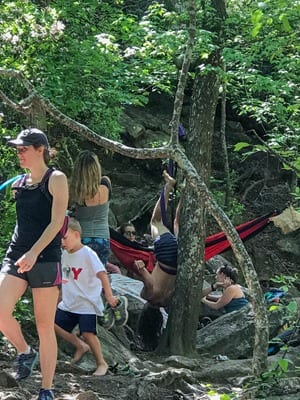 We wandered carefully into the falls area, completely killing their buzz, while they did likewise for us. 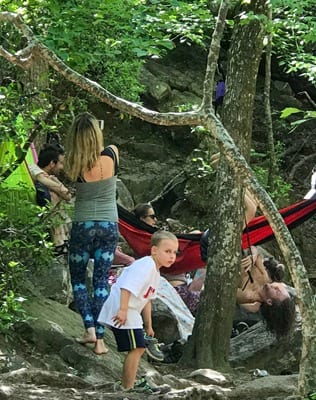 That Peavine Chute had been a gift of quiet serenity just for us. But we managed to get in the falls and stake our claim, having a little fun before we hiked up and out. 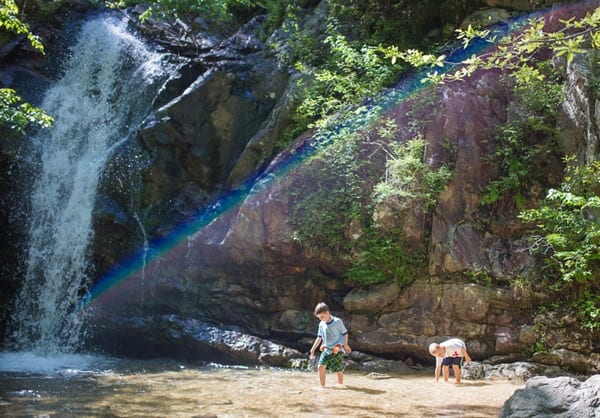 Our last find of the day happened nearly at the parking lot, and Noah was the spotter once more. 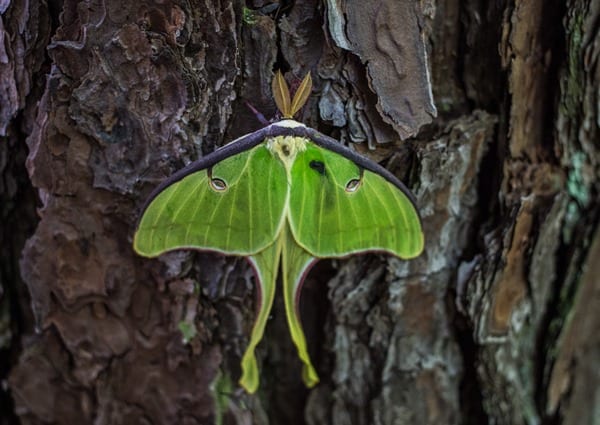 A massively huge Luna Moth, who was more than happy to let us observe her from all of her magnificent angles. 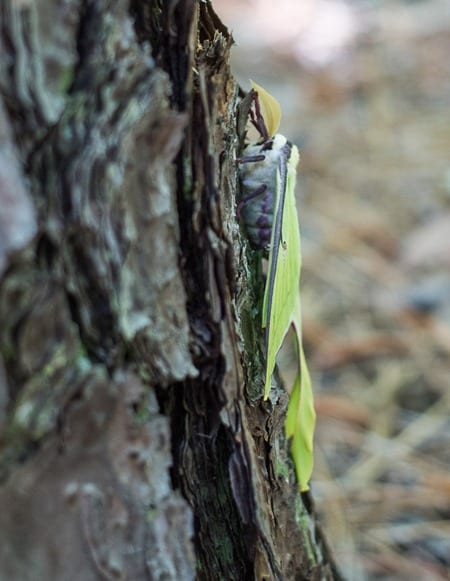 Our final mileage was 11.2 miles. It took 6 hours. And these four kids never once whined. They even THANKED me for the hike. 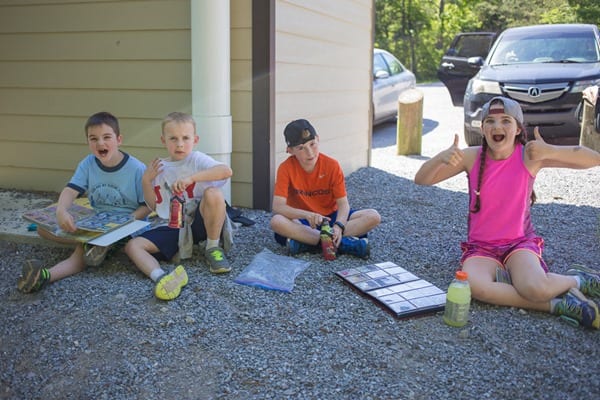 (But enjoyed sure sitting down for a Pokemon trade afterward.)

It was all a true hiking miracle.

Ali logged our hike as she went along in her Trail Notes book, and this was her summary page of the day. 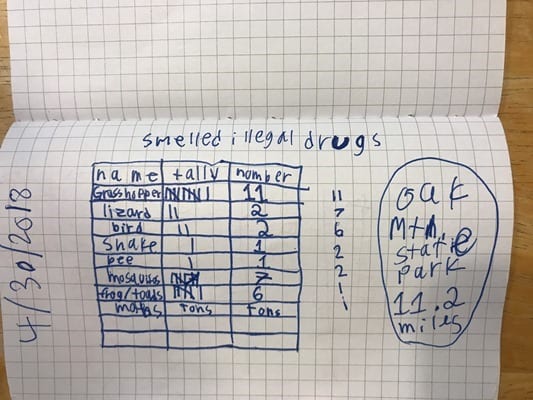 Yup, I think she covered everything.

8 thoughts on “The Long Haul. With Kids.”