I live near a lot of fancy suburbs. I do not live *in* any of them. In fitting with my renegade style of life, I live in the unincorporated county, where no one can tell me what to do and I am endlessly confused as to what should technically go on the third line of my mailing address.

But these fancy suburbs provide me endless entertainment.

One such fancy suburb is a rather hilly city, and they found the most glorious way to combine these two characteristics (fancy + hills) into the perfect official city slogan.

That’s right. They actually went there. They want to make sure that I am completely aware that they are currently looking down their perfectly sculpted noses at me who is, clearly, living a life below.

If you can even call it a life. More like An Existence Below.

It goes without saying that when, perchance, I see something that doesn’t quite meet the qualifications of The Above Life going down in their perfect enclave of humanity, I notice.

(And point and laugh. But that’s beside the point.)

One such item was The Laundry Basket Above.

On a particularly rainy Saturday, we were passing through The Life Above to go to Ali’s basketball game. It was dreary. Muddy waterfalls were blighting their roads. The world was ugly no matter how above you lived.

At a busy intersection, the type that’s so busy it requires a triangular cement divider in the middle of the road, I first noticed it.

There was a laundry basket, full of clothes and soaked all the way below its nasty nasty core. 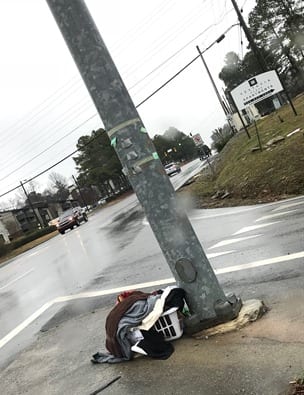 Clothes were spilling out. There was a brown towel. A green pair of underwear. Very yanky looking sheets.

It was the most un-above thing I’d ever encountered in the wild.

So naturally I took a picture and sent it to all my friends who live The Life Above.

(Thankfully they all have good senses of humor. Or they wouldn’t be my friends.)

I also couldn’t help but wonder.

What would make someone abandon their laundry in the middle of the intersection? Were they on their way to the laundromat (which of course doesn’t exist in A Life Above) and just happen to see their favorite ex sitting at the traffic light? And they squealed, dropped the laundry, and jumped into his (or her) Trans-Am?

The next morning, we were headed to church. We have to go through this particular intersection to get there, so we eagerly craned our necks to check on the fate of The Most Above Laundry Basket That Ever Existed.

It was still there, but now a good deal more strewn, and still quite moist. 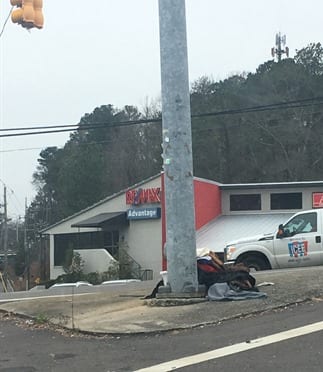 Clearly someone or something had been rooting around in there.

Which is when we began to make up stories.

Perhaps An Opossum Above had taken up residence. Which, considering Opossum track records in busy intersections, was either the smartest or stupidest thing an Opossum had ever done.

Or maybe someone simply needed a fresh pair of green underpants. Although fresh is definitely the wrong adjective…

The next Saturday, we began the Day Count.

The Laundry Basket Above was now on Day Eight.

Whose responsibility is it to clean up discarded laundry baskets? Is it the same guy who has to clean up roadkill? Why hasn’t he been around yet? There aren’t THAT many raccoons lying about…

The Laundry Basket Above made it to Day Ten.

Maybe the Laundry Opossum is an endangered species. I bet they have to build a picket fence around The Laundry Basket Above and leave it there forever. There will definitely be a plaque. He will become The Official Mascot of A Life Above. Everyone will bless the ground that is walked on by whoever discarded their full load of laundry. THEY ARE A POSSUM LIFESAVER.

THE LAUNDRY BASKET ABOVE ON DAY THIRTEEN.

Is mold growing in that laundry basket yet? Will it hurt the Laundry Opossum? I bet flies are laying their maggot babies in it. That thing is going to be An Ecosystem Above of its very own.

And then, it was gone.

Either The Roadkill Scraping Guy finally got around to the bottom of his checklist (right underneath “Small decapitated chipmunk on Altavista” was listed “Burgeoning laundry basket on Columbiana.”), or someone said “SCORE!! FREE TOWELS AND UNDERWEAR!” And happily scooped up the laundry basket and its Opossum home.

But whatever happened, it was no longer there, and I mourned its loss.

That laundry basket and I had become close. I looked forward to our bi-weekly visits. I pined to know its secrets. All of its stories of past, happier days.

Whose back did you dry, brown towel? Whose butt did you cover, green underpants?

But now I would never know.

A week later, as we passed through the intersection and I braced myself for my period of mourning, we saw it.

Right where the laundry basket had been, there was a dead animal.

Apparently it was never an Opossum Home. It was a Cat House. And when that cat returned from a chasing unincorporated mice, to cozy up into its comfortable bed of browns and greens, it discovered that its home had been stolen RIGHT OFF THE FOUNDATION, and it immediately died of shock and sadness.

A true Shakespearean tale of tragic woe and fitted sheets.

6 thoughts on “The Laundry Basket From Above.”