You may have noticed I’ve been on a bit of an outdoors binge for a half a decade or so.

(Which, by the way, is the most insulting word in the English language. “Outdoors.” AS IF doors had been there first, then nature cropped up all around them and so we had to call it OUTdoors. No. Doors don’t deserve a tenth of that honor.)

Anyway. I like running and hiking, and my kids do too, but they tire quicker than I do, or sometimes even think they’d rather do something else. But if I can turn it into a social occasion, they are ALL IN.

So to get what I wanted, I created The Last Minute Network O’ Adventure*, which is a pair of constantly-growing text groups where I send out our hiking plans to other homeschool moms, etc. who are available to hike on weekdays, and whoever can join us joins us.

(The other reason we have this group is simple: I need something to say when people find out I homeschool, then gasp in a horrified fashion, and say, “But HOW will the children be socialized?!” …I answer “Well, we hiked 18 times last month with 65 different friends, therefore spending approximately 30 hours engaged in quality time and conversation…so there’s that.”)

Every now and then I’ll create other outings for this group as well, as was the case with this Scavenger Hunt at Orr Park in Montevallo. There are over 40 intricate tree carvings within a large area of the park, and it was just begging to have a scavenger hunt made of it. The kids and I had only been there once, and it’d been over a year, but we remembered it fondly.

So I decided that two Scavenger Hunts were needed: a photo scavenger hunt for smaller kids, and a clue scavenger hunt for big kids. The photo one was easy. I had pictures from our last visit of almost all of the carvings, so I selected a group of very distinct characters, slapped them onto a page together, gave them checkboxes, and declared it done. 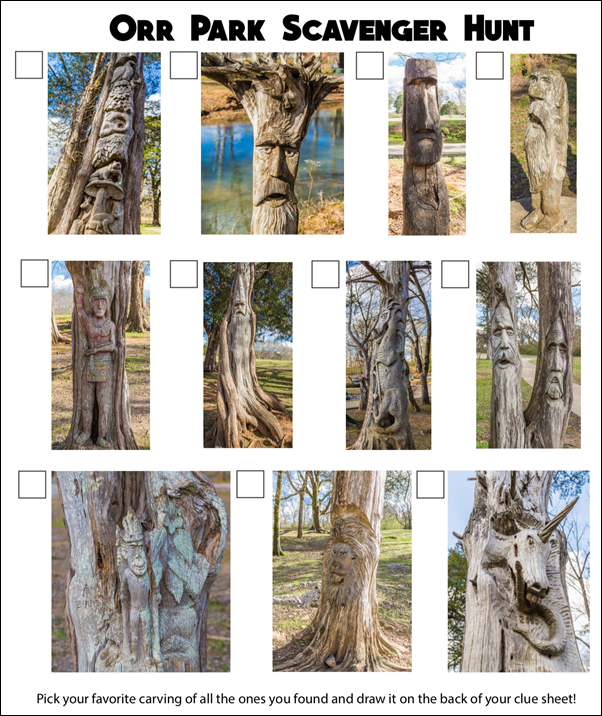 But when I went to make the advanced scavenger hunt, I learned quickly that I’m not very good at clues. I toiled through the sludge of my brain, trying to come up with witty ideas, with no luck. So I recruited Chris, whose skill with the quill is undeniable, and he had me a perfect, mostly rhyming clue sheet in less than an hour. 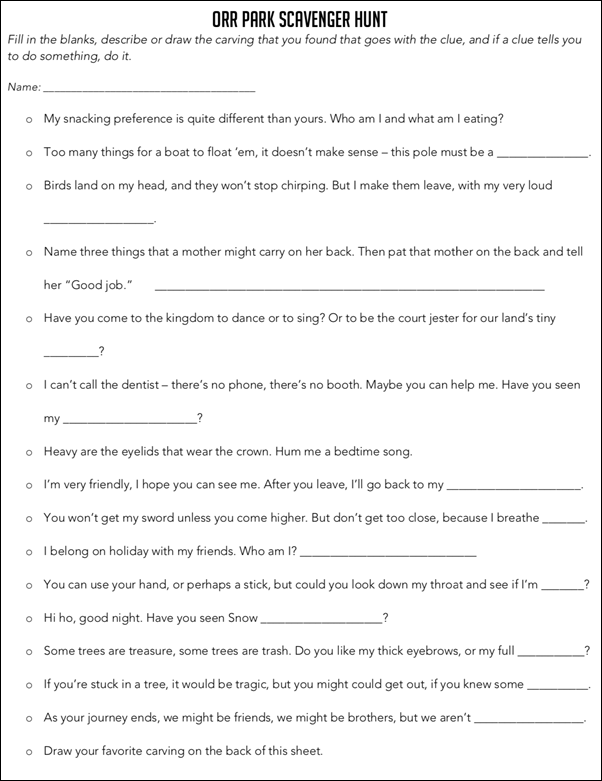 The kids and I arrived early to make sure none of the carvings had changed or been damaged, and thankfully all were still in tact – and with a number of new carvings as well. Of all the parks in Alabama, this one is one of the most fascinating.

Our attendees arrived, and we explained our instructions and set them off to hunt. 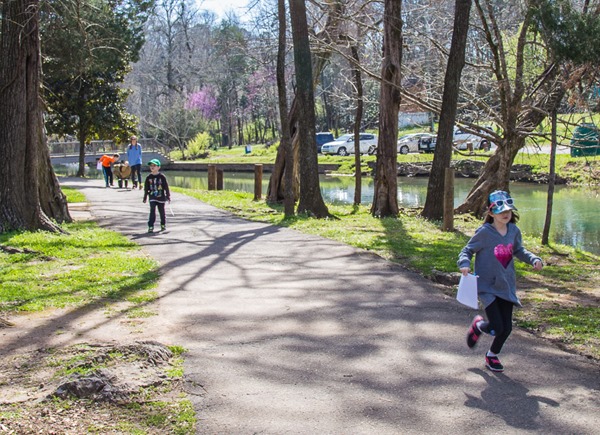 We had a total of 32 kids join our hunt – a few of which were strangers who just happened to be at the park on the extremely lovely day, saw me handing out clue sheets, and asked if they could play along. My kids, having helped with the clue checking, decided to be floating scavenging aids to kids who got stuck. 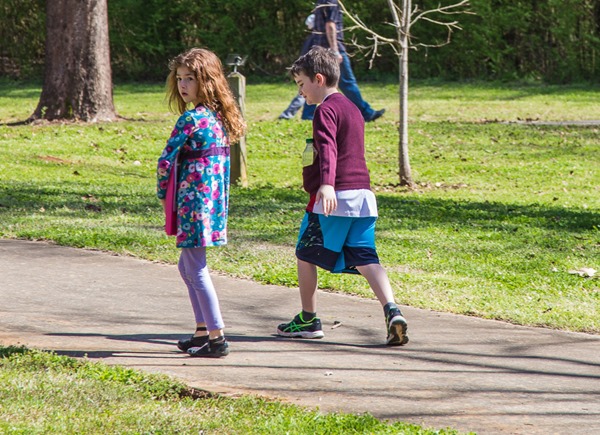 The part of the park with the carvings is a well-contained area, but it is very long. There was much running back and forth and back and forth again. Much exercise was achieved without any of them ever realizing it. 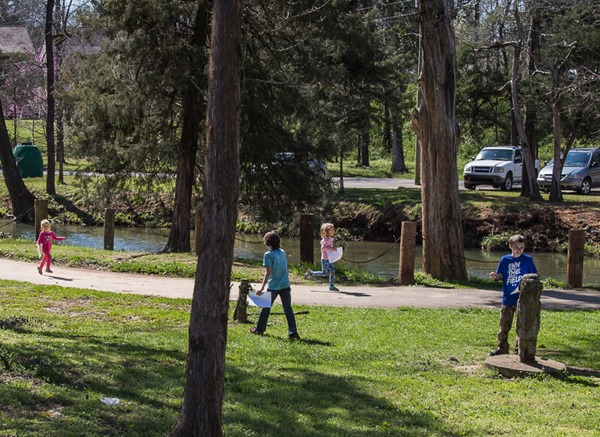 When they finished, they had to find me and turn in their clue sheets. 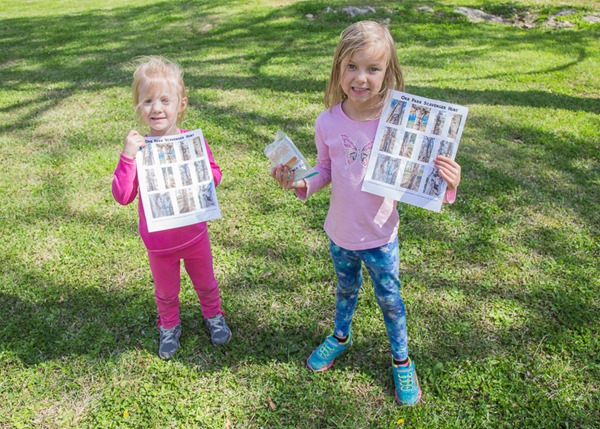 Then they received their prize, modeling clay to make their own sculpture – so that the day could totally count as an art appreciation field trip. 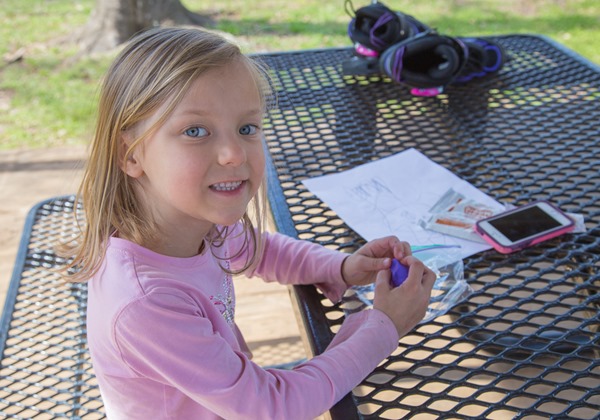 The kids took the assignment much more seriously than I assumed they would, all modeling one of the carvings that they had seen in the park. 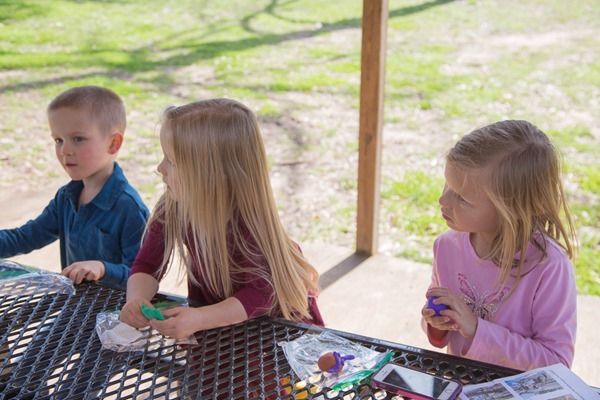 The Scavenger Hunt was a success, and I hope to do it again for anyone who missed the inaugural session. But you don’t need me to make it happen – just download and print out the photo and clue sheets and give it a try.**

* If you’re not in my Network O’ Last Minute Adventure and want more information, comment on this post and I’ll email you.

** Scavenger Hunts are not just for kids – they’re totally for adults. Chris and I spent many dates doing the Itty Bitty Magic City Scavenger Hunts that used to be printed in the newspaper. Scavenging is a proven bonding strategy.

Note – If you want another Scavenger Hunt, we made this micro photo scavenger hunt years ago for Avondale Park. Not all the items will still be findable, but most should be.