I cannot communicate in barber language.

I’ve been trying to figure out a way to style Noah’s hair differently for pretty much his whole life. His hair refuses to do anything except exactly what it does. Which is to hang. In a straight line. No part. No body. No nothing. I’ve felt as if he was years too old for his haircut for quite a while now. 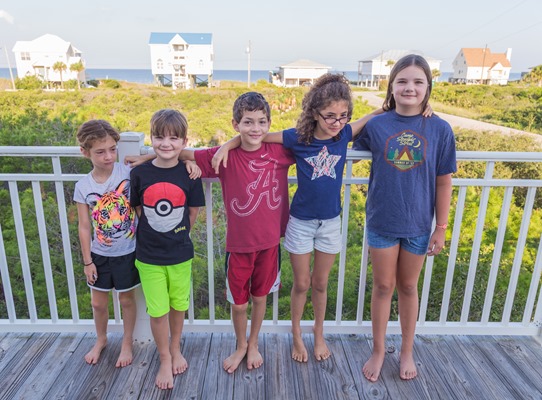 I’ve begged the barber to “give” him a part, or cut it closer, or anything. So the barber would cut his hair as if it’s going to part, and he’d part it for me while it was wet, and Noah will look like the perfect 1950’s gentleman. But then as soon as it dries, it hangs straight again – except with newly unimproved crookedly cut bangs.

Finally I decided to browse the internet until I found a totally new ‘do. Something leaving no amount of bangs to fall straight. I pulled up the Google. And the Pinterest. And made the mistake of browsing with Noah.

Naturally, he liked none of them. None were good enough for him.

After my eyes blurred together from all the kid pictures, I found one that I liked. I begged him to like it. 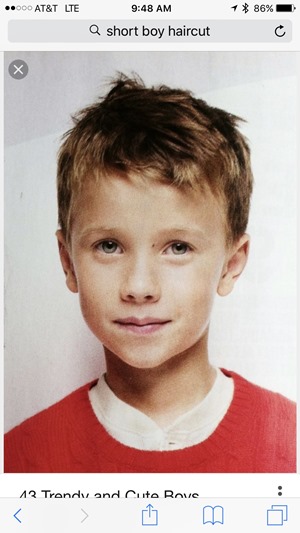 “Okay well how about this cut but fixed less messy.”

“Okay we can try it. BUT NO MOHAWKS.”

I wasn’t sure why this qualification had to be made, but whatev. No Mohawks it is.

I really didn’t want to pull up Pinterest for our male barber who still doesn’t take credit cards and has an old fashioned glass bottle coca-cola machine in his shop. He even has a shoe stand with what seems to be a full-time shoe shiner (who is usually taking a nap when we’re in there.) These people do not know about Pinterest. And I didn’t want to be laughed at.

But I took Noah in anyway, rather pensively. And the stars shone upon me. There was a woman working that morning that I’d never seen before, and we were assigned to her. Surely she’d heard of the internet. 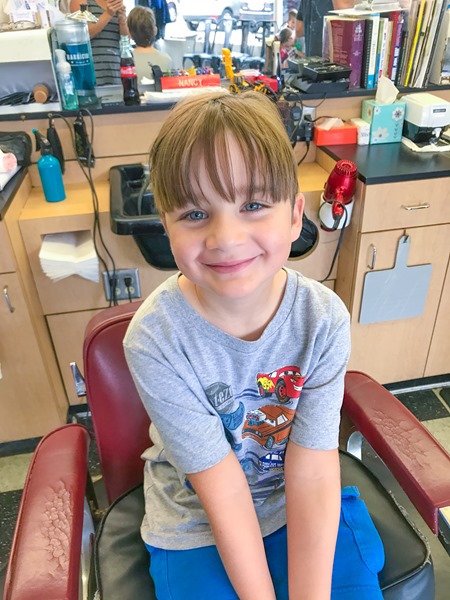 I told her it was time to try something completely different. I pulled up the picture and told her “this – but less messy. And a little tighter on the sides.”

She worked on him for a good 45 minutes – this was significantly longer than a usual snappy trim. I listened nearby as they discussed the weather and school and summer vacation and what was on the news. It was perfectly perfect.

I’ve never told a barber or a hair person of any variety that I didn’t like a cut, so even though I wasn’t feeling like it was exactly what I was after, I took the blame upon myself instead (maybe Noah doesn’t have the right kind of hair) and thanked her profusely. 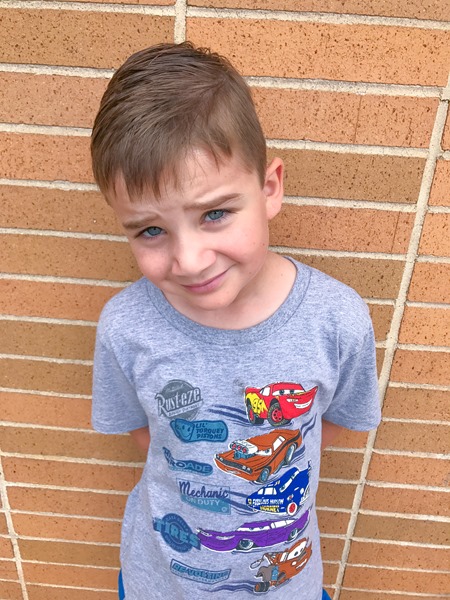 We took an after picture in the blaring sunlight, then went to Target to finish our errands. I thought that maybe the haircut just needed a little help to be what I had envisioned.

Noah was indifferent, as he has always been about his hair. But I explained my plan to him anyway.

“I’m going to buy you some gel. I think we can make your hair do the right thing with it.”

“Because I don’t know what gel is.”

“Well that’s a terrible reason not to want it.”

“OOOOH here’s some ‘Swagger Gel.’ Do you want some swagger?”

“I don’t even know what Swagger is.”

Clearly my kid needs to study up on vocabulary in first grade.

We decided on Aussie Hair Gel (because it was half the price of the Old Spice Swagger Gel – which Chris later said was no reason not to buy our kid some swagger) and tried it out when we got home.

By the stolen looks in the mirror and the impish grins I caught when he thought I wasn’t looking, I knew he loved it. 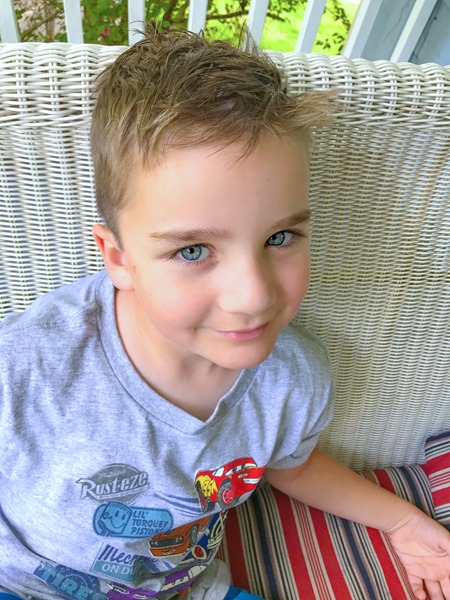 And so did I. It was exactly as I had hoped. Even thought it instantaneously aged him by at least three years. 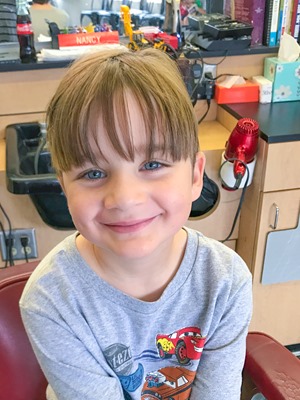 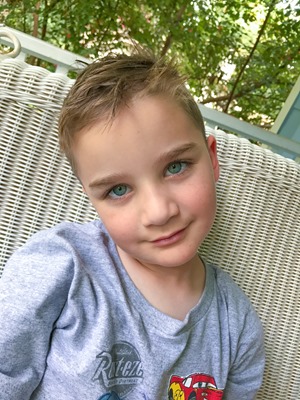 That night, after his bath, he asked for gel.

“Well, we’ll probably have to do it again in the morning, but I can put some in if you want.”

“Actually, I want to learn how…”

We stood in front of the mirror, me standing behind him, giving him lessons on how to properly gel his hair.

“See, run your fingers through it. Then pull the bangs straight out, then give them a little flip upwards.”

He grinned and giggled at his newly unearthed forehead, jumped around with excitement, and made my day.

The next day after church, he found me and said “I’m ready for a mohawk.”

“Really?!? I thought that was the one line you wouldn’t cross.”

I gave him what he asked for. He disappeared into his room to change his outfit to match – or at least his idea of matching. Then he swaggered outside where Chris was washing the car, leaned up against Chris’ Mustang, and asked me to take his picture. 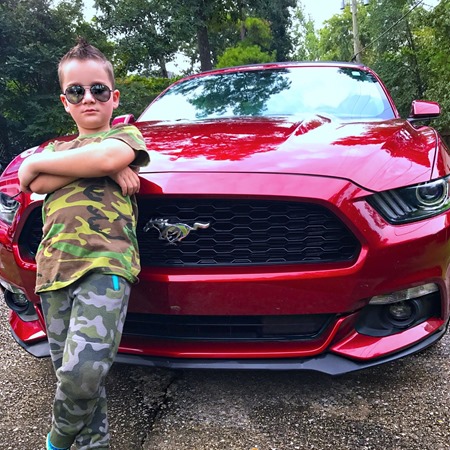 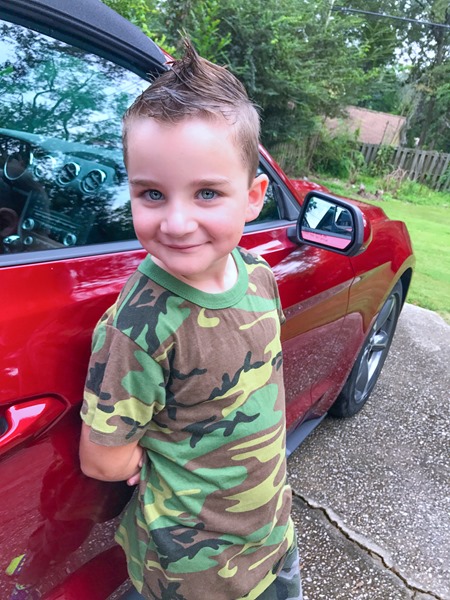 16 thoughts on “On Finding Swagger.”