Our family has two distinct branches.

Chris does not recall a time when he had a run-in with any poisonous-plant-caused rash, and does not have the pleasure of experiencing bug bites of any kind. Sometimes he feels a bug on him and is annoyed by the biting sensation, but does not swell or itch or react in any way to the bite thereafter. More often, though, bugs don’t even bother to perch upon him.

Then there’s the Rachel Branch.

I spent most of my childhood and parts of my adulthood afflicted by the rashes of multiple poisonous plants, and am the best insect repellent money can buy, because if I’m with you, every living thing within 25 miles will be feasting on me as if I’m the main entrée at a party thrown by pre-prison-days Martha Stewart.

It appears, after much analysis and hiking, that Ali is a descendent of the Chris Branch, and Noah is a true prodigy in the Rachel Branch.

The poor child can get bitten by anything anywhere regardless of whether he is lacquered in bug spray and/or the surface area in question is completely hemmed in by tight-fitting garments.

He’s the Taco Tuesday of the mosquito world. The Avocado Toast of the ant world. And the Double Fudge Brownie Milkshake with Sprinkles and a Waffle Cone Straw of the spider world.

And furthermore, his reactions to said bites can be rather…intense.

Which explains how his penis swelling like an overextended water balloon last week was totally standard for him.

It wasn’t his first rodeo.

(And when I say rodeo I mean the kid was walking like he’d just dismounted from a large bull.)

But he was calm, he was knowledgeable, and he fell right back into Protuberated Penile Procedure. 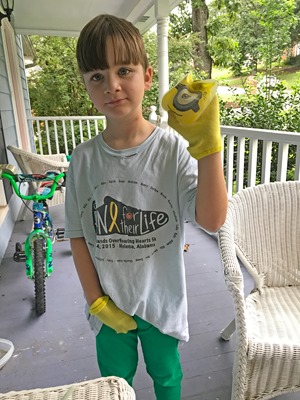 “Put one ice pack in the pants, get an extra ice pack to swap out, and oh by the way this whole operation is easier if I wear gloves.”

He took it all with the casualness of a sore throat, as if carrying around an oversized package is something that is common to everyone’s daily experience, not just the UPS and FedEx men.

…Or at least, he was nonchalant until he was half asleep that night, when he meandered to me about his feelings about the situation.

“I’m sad. That my firehose is swelling. But I’m glad that my bottom isn’t swelling because then it would be huge. <slaps his own butt> Because it’s already big.”

(Nobody wants to be a spider-inflicted Kim Kardashian.)

If that had been his only bite, he wouldn’t have even gotten a doctor’s visit out of it. I had already looked up my last blog post to ensure we were waddling through all the recommended treatment steps.

But it was the one on his neck that was troublesome. Because the next morning, it had turned into The Dreaded Target. 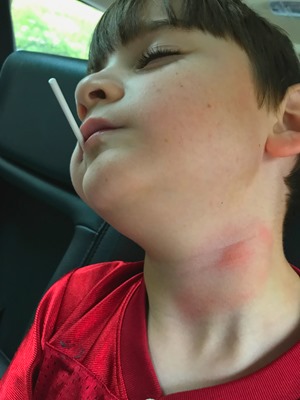 THAT’S the sign we all have nightmares about. THAT’S the one that should send you to the doctor the minute you see it. Or at least those of us who live in a territory of Lyme Disease.

Noah, however, was becoming more preoccupied with his other still-growing issue.

“I’m tired of walking like this. But I can’t walk normal because my firehose feels gross. I HATE IT!!”
“I’m sorry. Hopefully the doctor can help that, too.”
“As long as it’s not a shot right HERE. Because that would really hurt.”

As expected, our Pediatrician inspected the lower issue and said “Yup, looks like last time. It’ll be fine with ice and Benadryl.”

But the neck issue…whether or not it was what it looked like it was, it’s ALWAYS best to treat for Lyme if it could be a possibility. It was most likely a spider bite gone dramatic, but just in case…

As she looked up his dosage of antibiotics and steroids, Noah told her in no uncertain terms that he’s never even tasted a lime. Clearly she was mistaken. 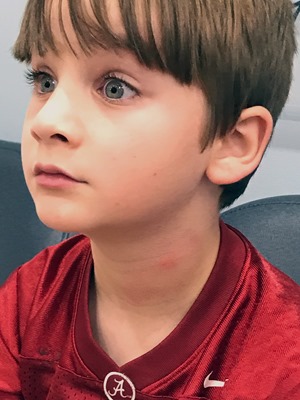 Noah was concerned as to his level of boredom during his recovery. He could not walk. He could NOT run. And he even made sure to tell Chris specifically* that he ABSOLUTELY COULD NOT swim. I mean the kid had a freaking millstone hanging around his…well you know.

*Chris tends to be an authoritarian ruler when it comes to regularly decreeing family fun at the pool.

What could a boy do who could not use his body from the waist down??

While we wandered Walgreens waiting on his prescriptions, God shined down upon us and led us to a couple sets of Minecraft papercraft boxes that were on clearance ($4.49 a set, currently on Amazon for $15-20.) 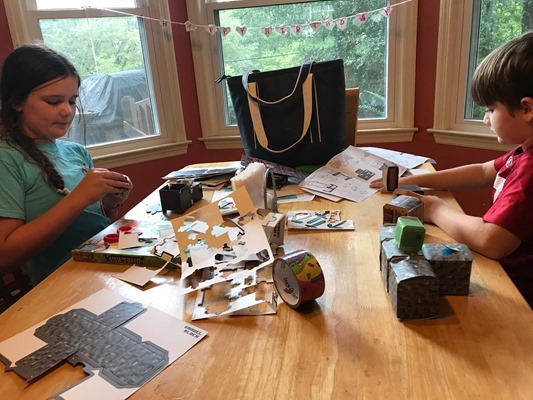 This blessed craft party ended up being the ideal weekend time passer while waiting for one to be able to walk without a waddle. With the added benefit of my house now being covered in a thin layer of a Minecraft empire. 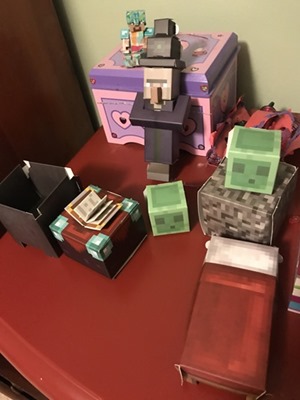 So at least the road to genital recovery has treasures along the way.

Epilogue: Noah is back to normal now, except for the extreme maniacal laughter and hippity hoppity effects of his steroid. I actually really like this kid on steroids. Can I get a long-term steroid prescription to treat chronic whininess? Because it’s totally working.

11 thoughts on “On Being Absolutely Delicious.”