The Alabama Weather Scene has changed since I was a kid.

Not in content so much – I remember tornadoes and warnings and staying indoors as things were flying about Wizard-Of-Oz style from my youth. My mom claims to have sat in a rocking chair on the front porch with me in her arms while a tornado tore through, dropping a tree on the back of our house. (I guess it was just a mother’s instincts to know that the front porch was our safe room that day. Who knows.)

The weather is the same. But the warning time of coming storms has greatly increased, as has the paranoia around those warnings.

When I was a kid, most of Alabama, it seemed, laughed off tornado warnings. In the same way, yet opposite, that we laugh at ourselves for shutting the state down for an inch of snow, we laughed at ourselves for never worrying about tornadoes – they happen all the time, after all.

2011 erased that attitude. We as a state suffer from PTSD of 4-27-11, and we take even thunderstorms seriously now. That, along with tornado prediction technology and coverage being greatly improved since I was a kid, is what has changed Alabama. When you add paranoia + predictions, you get state shut downs.

On Wednesday, a good portion of the state was in Tornado Possibility Dark Color 4 (out of 5 – if we ever get Dark Color 5 again, Chris swears we’re leaving the state), and so out of precaution, every school system closed – even The University of Alabama.

(Except for homeschool. If we’re going to be stuck at home all day, we might as well do school. Poor kids.)

But this type of “Tornado Day” was the weird, unpredictable kind – there would be no “front” or long line of storms coming through that you could watch with dread and trepidation, knowing to the minute when it would reach your neighborhood. It was the mostly sunny day kind, therefore adding to the explosiveness of the atmosphere, with violent pop-up storms coming seemingly out of nowhere in random areas.

Existential weather dread is worse when the sun is shining and the radar is clear. It’s downright ominous.

So I spent the day indoors, checking the radar every 5 seconds, fighting the losing battle of cell phone battery life versus the constant reminder of “Charge your devices in case you lose power!”

We were antsy. SO antsy. It was a beautiful day but even going out into the front yard seemed un-recommended.

Finally, at 5pm, I could take it no more. We were originally supposed to be out of danger by then. There was one small yet nasty storm east of us that the meteorologists were covering nonstop (seriously y’all – hail the size of freaking baseballs), and so no one was giving Birmingham the promised all-clear. There was some sort of “dry line” that was supposed to be coming through any minute, therefore clearing the environment of anymore storms.

You can’t see dry lines. But you can imagine they’re there if you think really hard and are positive you’ll explode to stay indoors for one more second.

So Chris and I decided that surely we were good.

Chris left straight from work to run, and we arranged to meet him at the Botanical Gardens later to trade off so that I could run, and that way the kids could run around the gardens in the meantime.

So we set out on a beautiful summer afternoon. When we got close to the gardens, big fat raindrops began to fall.

But it was surely just a sprinkle, so I decided we’d ride up to the top of the city first – for a peek on how it looked on this weirdly sunny stormy day.

As we got closer to the ridge, the skies behind us began to look darker and more ominous. Quite like an Oculus bearing down upon us (for those of you who have already seen “Fantastic Beasts and Where to Find Them.”)

I checked where Chris was running on my Find My Friends app – a mile away, in the direction of the nastiness.

I should save him. He’s gonna get soaked.

Right after I get my picture. 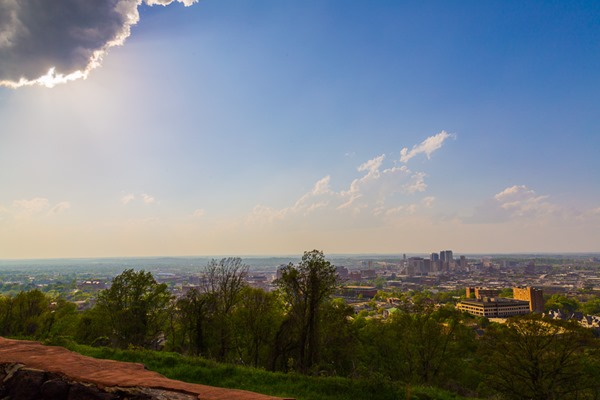 I grabbed a couple shots, the dark cloud eerily covering the sun on a clear and innocent-looking day, then began chasing down my husband.

“Okay kids – you’re on Daddy watch. Keep your eyes out your window.”

It took a few turns, but we found him, right as he was crossing the street. He had headphones on, so I yelled at him. “Hey!! Do you need a ride??”

He didn’t even look back. He shot me a peace sign from over his shoulder and kept running. He totally thought I was some random busybody motorist.

I followed him down the road and yelled again. He yelled back that he was okay and kept running.

I drove around the block, parked, and started checking Twitter and the radar. A spectacularly nasty little storm had unpredictably (as predicted) popped up from nowhere and it was headed straight our way, then on toward our house.

Chris took the clue that we’d chased him down and paused to look at his radar. He texted me.

“On second thought, come get me.” (Paraphrased.)

I drove around the block, grabbed my husband, and peeled out to drive to his car.

We discussed what we should do. I wanted to go home and hide in the basement. He wanted to drive away from the storm. I finally realized he didn’t want hail damage on his precious car. He concurred. It made sense – as long as we could decisively tell which way the storm was not headed.

As we got back to his car, things began looking worse. And closer. He quickly formulated a plan and told me to follow him north – to a suburb on the opposite side of the city. We screeched out as rain began falling in earnest and giant lightning bolts started touching down. I might’ve whispered a few choice words just out of earshot of my children (I hope.)

Managing no red lights, we got on the freeway and sped north of town.

In no time, it was a bright, sunny day in front of us and to the left – but behind us and to the right it looked downright gross.

We ended up at a lovely park we’re never close enough to visit (Black Creek Park in Fultondale), taking a nice, calm family walk, while getting multiple texts from neighbors asking if we were okay and sending pictures of hail everywhere and the tree down on our next door neighbor’s house. 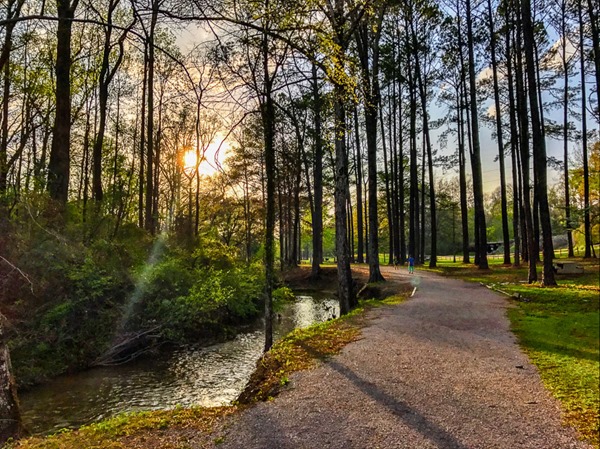 The wind was powerful and dry where we were, and we quickly surmised that we had, indeed, finally found that “dry line”, whatever the heck that was anyway.

We walked down the lovely rails-to-trails path, pausing with a hush to watch some groundhogs scurry into their holes, and finding a playground with delightful eccentricities to add to the beautiful and deceptively placid sunset. 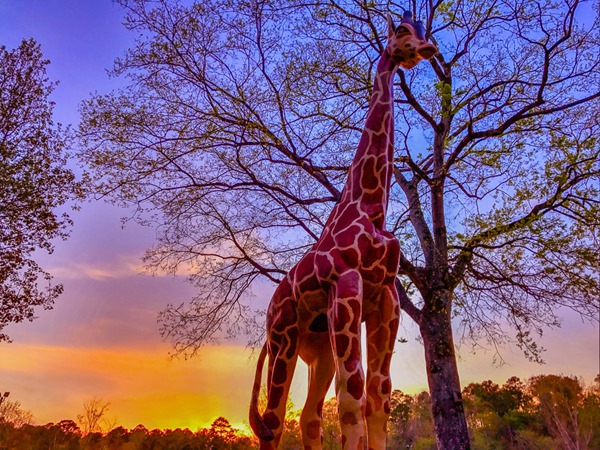 The kids even found a massively nasty bug they followed around the playground for a good while – clearly a win. 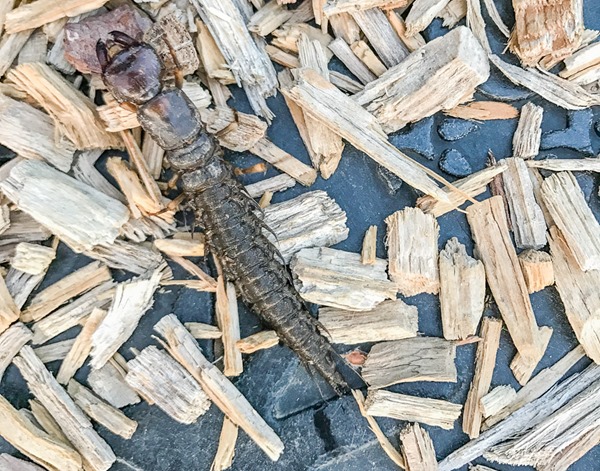 He was inches long, y’all. I looked him up later and – no lie – he’s called a Hellgrammite. They usually live their entire larval lives (5 years) under rocks in streams, and only emerge if a thunderstorm chases them out. Everything made so much sense.

(Then they’re a full-grown adult for one week before they die – but for that one week they’re the most terrifying, dragon-sized fly you’ve ever seen. Go ahead – Google “Dobson Fly” and see what I mean. Add that to Alabama’s Hunger Games status.)

But I digress. Besides that nightmare, we spent our evening simply enjoying the exultation of successfully fleeing a hail storm. 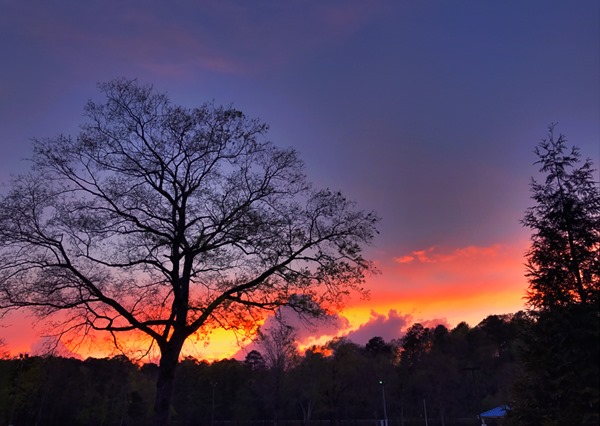 4 thoughts on “The Opposite of StormChasing.”