We first saw him on the way to church Sunday morning.

He was lovely. His hands were up in the air as if grasping for the light. He wasn’t gory – just looked like he’d been keeled over in shock.

I’d been keeping my eye out for a raccoon for months. I didn’t have one in my collection (I also need a rabbit but I have yet to find one of those in acceptable condition. Please report any bunnies you come across.) And on top of that, I had been needing a medium-sized animal to wear a very fantastic glittery St Patrick’s Day hat – and the deadline was fast approaching.

The first problem, however, was that he was on the side of a fairly busy road that had very, VERY little shoulder.

The second problem is that the fairly busy road in question led directly to my church. And I think you can relate – we all have people in our lives and perhaps especially in our churches that might be a bit put off to come upon us staging and photographing roadkill while they were on their way to church.

So I knew I couldn’t do it directly before or after church.

But we were to come back that evening to take the kids to their musical practice, so I could do it then.

“Yes….but….you don’t understand. That’s part of the challenge – of the fun. If I can prep and snap a picture without a single person – even a stranger – seeing me, I feel a thrill of accomplishment.”

Before we left for church, I pulled out my St. Paddy’s Day hat from my roadkill kit. There were actually five hats in that dollar store bag. OOOOH…what if I could find five creatures this week and leave them with the luck of the Irish?? It would be as if I were sprinkling my whole city with St Patrick’s Day Cheer.

After dropping the kids off, we discussed our plan. Sunday nights are a short date night for us – an hour and a half of dinner or coffee or in general relating before the start of another busy week.

But on this particular date, that raccoon would be our first stop.

On the way to church as we approached where the raccoon had been laying, Chris said, “Now don’t be disappointed if he’s gone…it’s been all day.”

Sure enough, his roadside spot was empty.

“Maybe he rolled down the hill. We’ll drop the kids off and then come back and go down that driveway below the road.”

“Okay!” Chris is so good at lifting my spirits. And if he were down there, I wouldn’t have to worry about the shoulder or being spotted by churchgoers!

We dumped the kids and drove back down the hill. Chris pulled down the steep driveway below the road. As he backed down, we both strained our eyes to see any sign.

I got out, donned a pair of rubber gloves, and grabbed a tiny hat.

I walked over to assess the situation.

It was the first new friend I’d met that STANK. And also, maybe he just fell in a very unflattering pose, or maybe he’d started to swell with the processes of cellular breakdown, but he looked extremely fat – more like a victim of the game “Pin the Raccoon Tail on the Groundhog”.

That and not being able to see his face really made me doubt that he was the raccoon I’d been looking for to add to my collection.

But I tried my best. I gave him a hat, then took a few pictures.

I brought my camera over to Chris for inspection.

I found a stick and moved him around a bit, teaching him how to show off his angles a little better. At least you could see his little raccoon facial mask now. But he was still fat.

Chris, meanwhile, was enjoying photographing me photographing my model. See his adorable tail sticking out? If only the rest of him had been so cute. 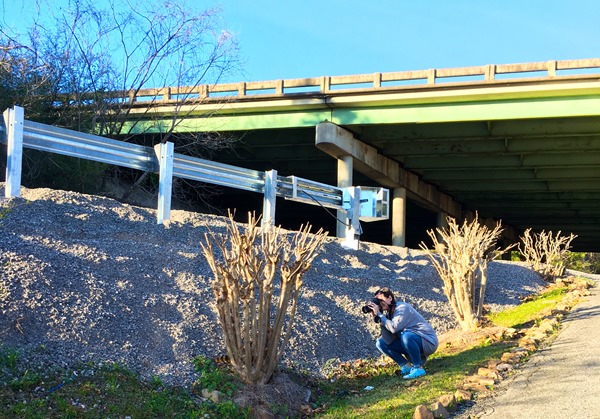 This was not how I’d wanted to use my hat.

I later Photoshopped the crap out of this guy to make him look this good – I even used the evil skinnying tools on Photoshop to get rid of some of his decomposing bulge, as you can tell by the oval angles of his hat. 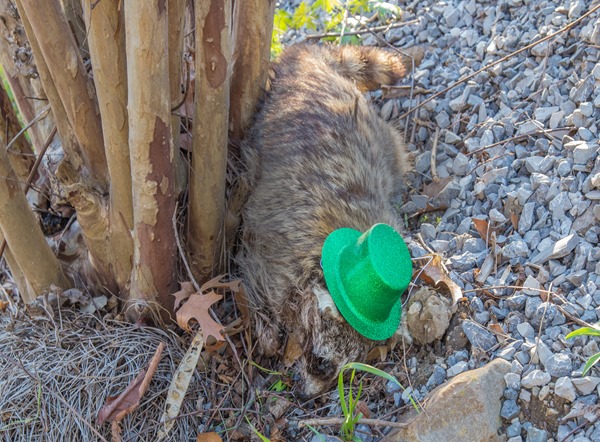 Limerick the ‘Coon
There once was an Irish raccoon
Who died on the road ‘neath the moon.
But the birds ate his eyes,
And the heat swole his thighs,
Thus the sight and the smell make you swoon.
– Chris the Husband, whose skill with the quill is undeniable.

But Chris told me to cheer up – we’d just make it a roadkill date! Stop by Starbucks for fuel, then drive around looking for new friends.

This, y’all, is why I married him.

But we had a head start. That very morning, my dear Roadkill Bestie Tanya had sent me several pics from her run with a rather attractive squirrel. 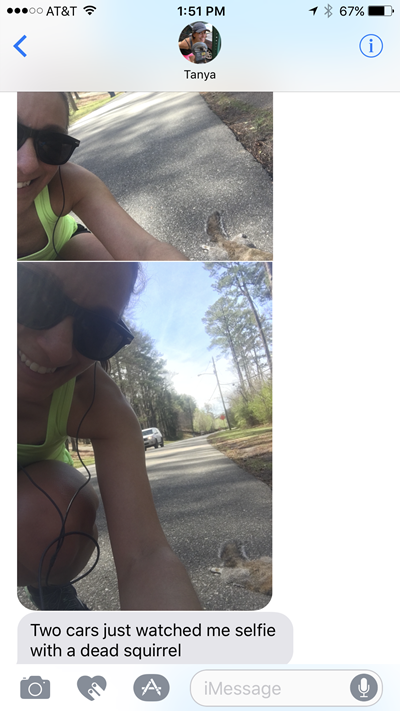 I’ve found a lot of squirrels lately, which is why I didn’t immediately run out to put a hat on hers.

(Such as Flat Stanley the Squirrel,) 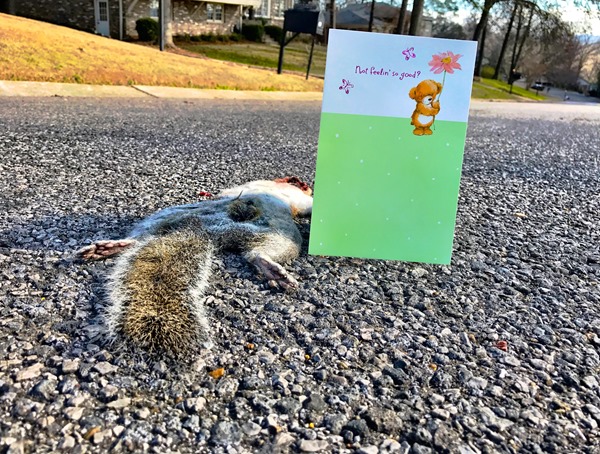 (And Snickers the Squirrel.) 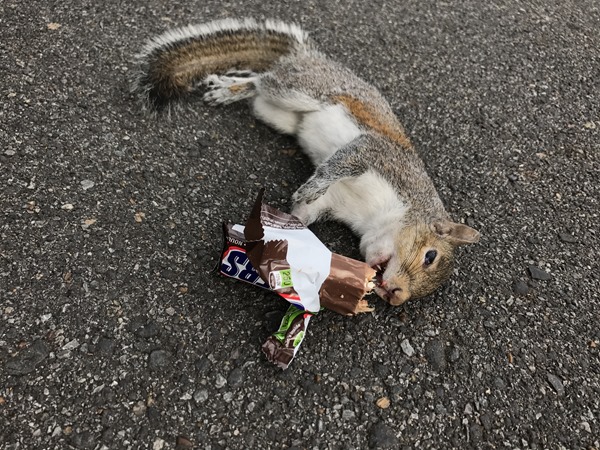 “Eat a Snickers.”
”Why?”
”Because you turn into an indecisive squirrel when you’re hungry.”

Squirrels are the low-hanging fruit of the roadkill staging world.

But after my Raccoon failure, I felt that her easy squirrel would be a good, redeeming next target to help me regain my confidence. So we meandered over to where we thought she’d found it and began our search. It didn’t take long, and he was in a delightful pose, looking just as if he’d had a bit too much green ale.

I present to you, Patrick the Squirrel. 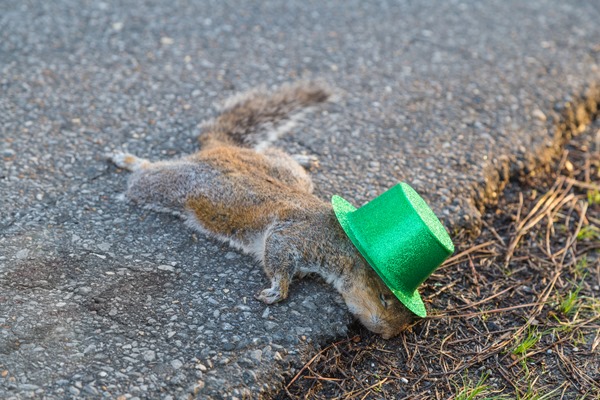 There’s a Leprechaun in me head,
And I wish that I were dead
For I don’t think he’ll e’er let me be.
Oh, he tempts me with his gold,
And if I were e’er so b old,
I’d strangle him and leave him in the street.
– Old Irish Drinking Song

And, thanks to the timing of our visit, I was even able to photograph my two favorite subjects at once. 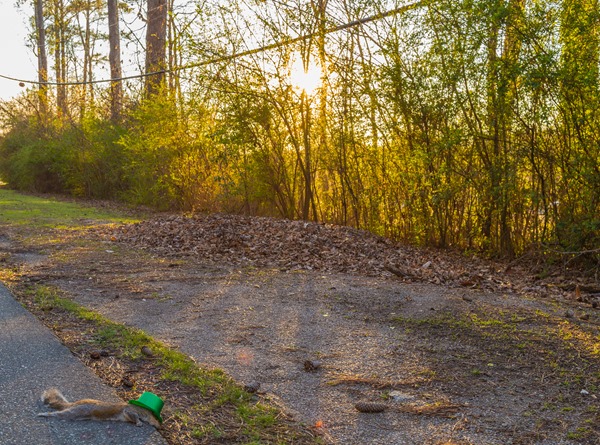 We spent the rest of our delightful date driving around, watching roadsides and byways while having fantastic and deep conversation about the best places and ways to find new friends, and judging harshly the ones we came across that were unsuitable for our journey.

We didn’t use the last three St. Patrick’s Day hats that night, but a lovely date we had.