A couple of weeks ago I got served some sponsored posts that made me very angry.

It was an illogical anger – holiday-induced-insanity even – but it happened. 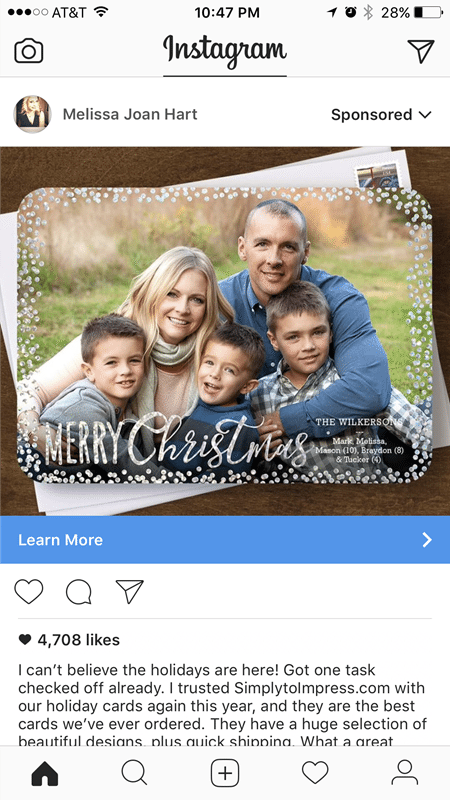 First let me say that I do not follow Melissa Joan Hart. I do not follow any celebrities (with the exception of The Big Bang Theory Cast because they’re funny and I do not really know why I follow them but I do.) The fact that I was getting sponsored posts not from brands but from celebrities really irritated me. At first I didn’t know why it angered me so intensely, until I got the second one – this time on Facebook. 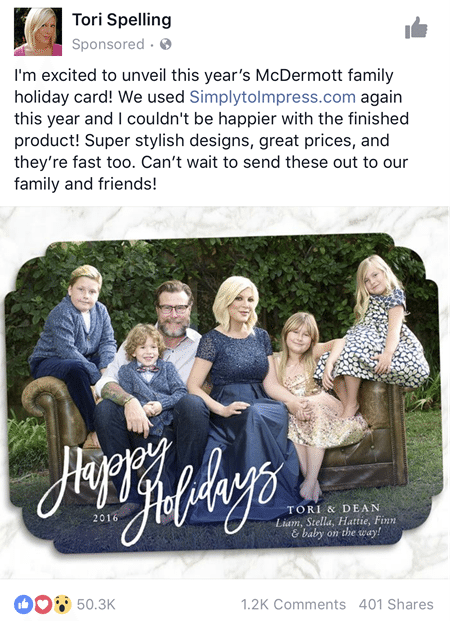 Getting two in a row, from different social platforms, really helped clarify what I hated about these ads. Even more helpful was discussing them with Not-Crazy-Renee. Being each other’s Spirit Animal often enables us to articulate the whats and whys behind what the other one is currently hating, even when it’s petty and ludicrous.

So let’s bullet journal the reasons my heart was overflowing with holiday hate.

● I have enough angst and guilt over my short-lived season of family photo Christmas card making (was it 2012 and 2013? Or maybe 2011-2013?) that I do not need celebrities I don’t even like showing up in my feed to humble brag about theirs and remind me that I don’t have it together enough to make that happen.

● Really, Tori? You’re unveiling your holiday card? As though there is a crowd gathered around you with bated breath, just dying to see your Christmas card? Oh wait – I guess since you sponsored the post, that answers the question. You’re going to force us to attend your unveiling whether we want to or not.

● The name of the company that is underwriting these ads – Simply to Impress. Yes, that’s the holiday spirit we’re all trying to get back to. That’s why we send Christmas cards. That’s the Reason for the Season.

● The leather-couch-outside thing is so 2013, Tori. Everyone knows that leather couches do not belong in the grass, especially when accompanied by perfectly coiffed humans in formal wear. And if you’re going to do the leather couch thing, at least do it in a large field, the place where leather couches seem to be indigenous (at least that’s what cultural anthropologists will think when they study their excavated collection of 2013 Christmas cards.)

● And Melissa – it’s super obnoxiously cute that your friends and family know you’re actually Melissa Wilkerson and not Melissa Joan Hart. It’s a good way to show that you’re totally a real person, and not a celebrity bot living a perfect life and sending out Christmas cards simply to impress.

● Tori, how embarrassing was it for you to have to go into your Facebook and BUY a sponsored ad? Isn’t the point of being a B-List celebrity that you have the world’s attention? I mean sure, Simply To Impress reimbursed you for your social media sell-outedness, but tell me – was it worth it? Did that little paycheck really make an even more lavish-on-the-leather-couch-outside lifestyle that much more attainable?

● I love how you both sound exactly alike in your accompanying flowery descriptions. I wonder which lucky intern got to write the copy for both of your posts. (“All you have to do, Tori, is copy my email, hit CTRL-C, and then go to Facebook and hit CTRL-V.”) (“Hey Tori, can you go in and edit your post and take my email address off the very beginning of it? That’d be great.”)

● Who, exactly, are you trying to reach? Are their people out there that will go buy the identical Christmas Card design so they can tell their friends “Oh yes, I have the same Christmas Cards as Tori McDermott. That’s Tori Spelling, for those of you who don’t know her legal name. #SimplyToImpress”

And then, in a flurry of inspiration and dark-mindedness and manic preparation and fancy writing, I decided that I would, indeed, send out a small batch of Christmas cards.

I took my list from the previous years and pared it down a good bit, then asked my blog readers if they would like a Christmas-Ish card. Because really, these Christmas Cards had to be wanted – they best arrived anticipated, not out of the blue and unexpectedly.

I hurriedly ordered a new batch of my favorite creation of 2016 and then ran over to Hobby Lobby and bought decorative stickers. 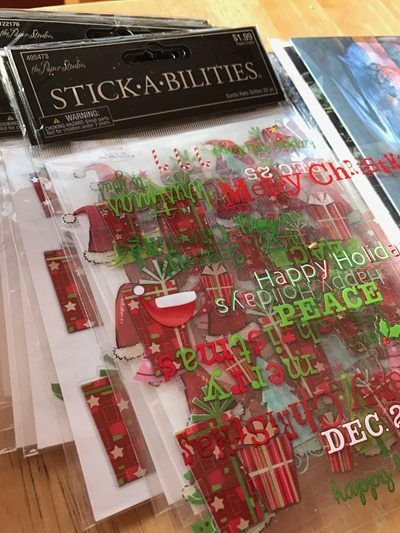 Then, attempting to make each of the cards unique, Noah and I set out on a holiday deco-fest, while Ali preferred to watch in wonder. 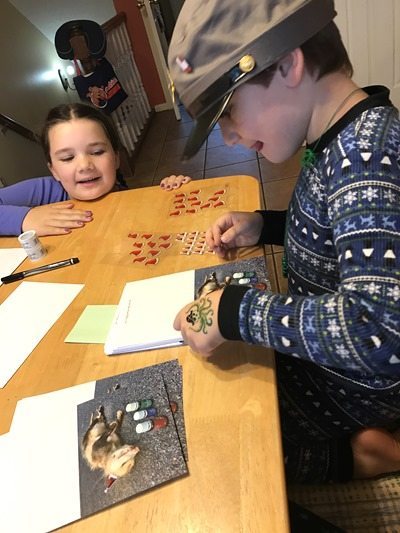 Sloppy the Squirrel and Crunchy the ‘Possum were redeemed, one by one, into a beautiful celebration of the holiday season. 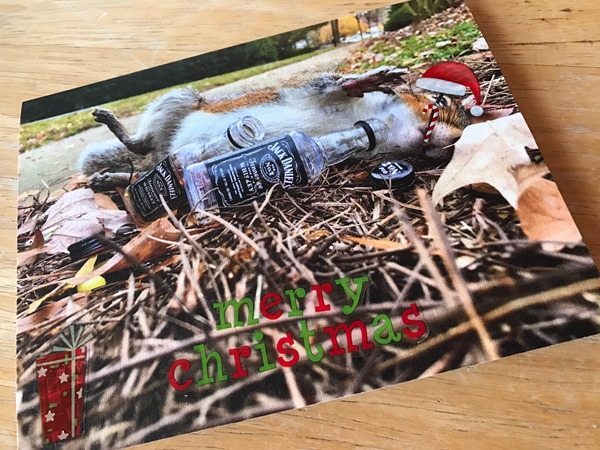 Because nothing says Jolly like a ‘Possum and her oils. 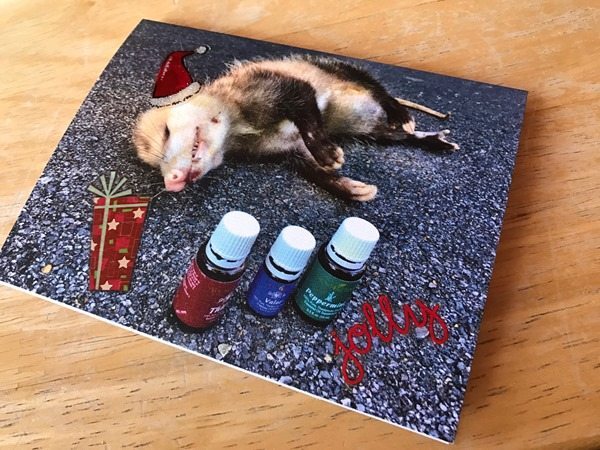 I have never in my life had so much fun with Christmas Cards, giggling as I created each one – especially when I realized that Crunchy was able to hold a small gift. 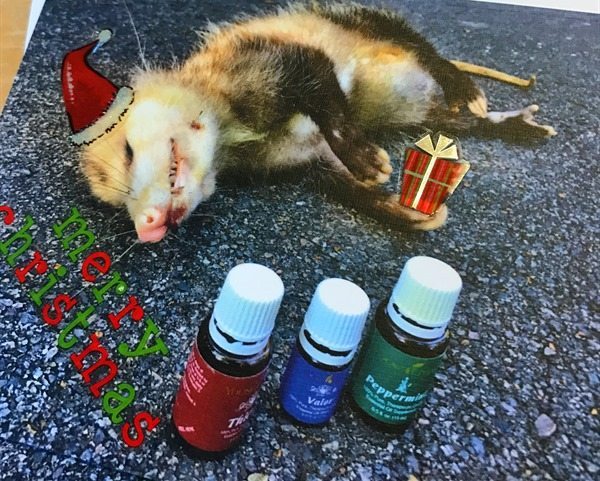 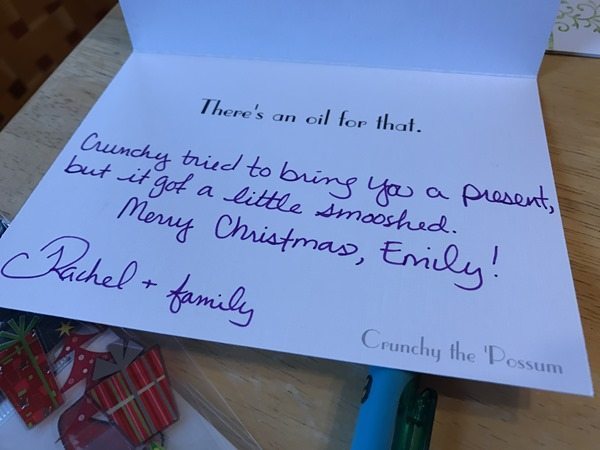 My envelopes were just fancy enough to hopefully hide the unexpected turn of events that would be found within, 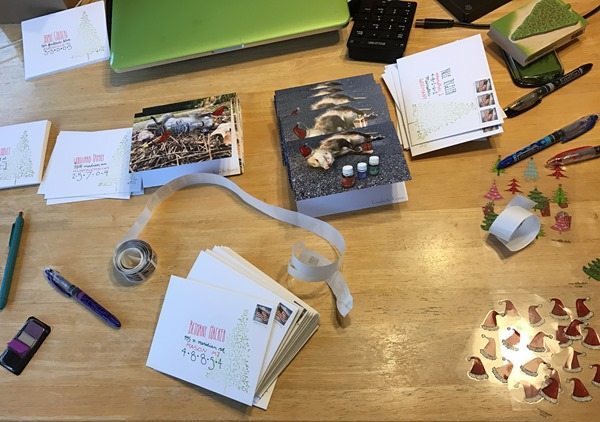 And I knew that my goal was to add some levity amongst all the cards that my friends and blog readers would be receiving this season. 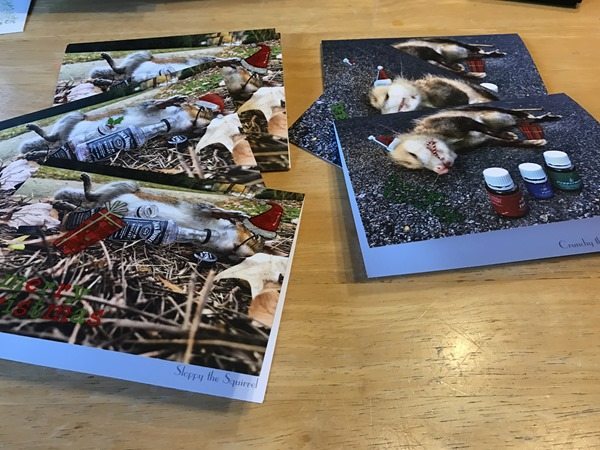 Lest you miss the gravity of the moment, this is a story of redemption. Because just as Crunchy and Sloppy had been redeemed for the holidays, so had Melissa and Tori, along with my Happy Holiday Heart. Because yes, I despised them and their obnoxious sponsored posts, but ultimately they drove me to the cheeriest Christmas card making of my life.

So thank you, Melissa.

And thank you, Tori.

And even thank you, Simply to Impress.

I am certain that this outcome was your exact intention.

Editor’s Note: If you didn’t receive a card from me this year, I apologize. I sent out a much smaller batch than usual due to the labor-intensity, the limited number of cards on hand, and not wanting to cause any queasiness in those who hadn’t been slowly immunized to my sick sense of humor. If you would like to receive a card, albeit late, email or message me your mailing address. Maybe Crunchy and Sloppy can be repurposed for New Year’s, Valentine’s or Easter. If you would like your own set of non-holidayed Roadkill Note Cards to send out to your friends and family, they can be purchased here – with 100% of the profits being donated to The WellHouse.