For those of you who have been around for a while, you might remember Chris’ Lego Nativities.

They started out rather normal, then grew into something more grand, then took a plot twist, then added wheels.

My mantel has still hosted Lego Nativities the last couple of years, but I’ve been on a break from blogging about them.

Last year, the Lego nativity, and a lot of other things, were stolen by the Grinch who hit Christmas head-on. We did our best to keep up the cheer, even decorating water leak damage in the living room, known as “The Holiday Hole.” And Christmas still came. And my husband’s Lego/Christmas heart grew 3 sizes, as always.

This year, putting the past poo of 2015 aside, and boldly charging into 2016, Chris said the mantel was going to be AMAZING. To ensure this, he started working on his design in February.

“Do we really need Lego above the fireplace in February?”

But…nothing changed from February until November. The same few buildings were there, waiting to be made into something spectacular.

While watching the parade, Chris and the kids were building a Lego set from The Lego Movie when he was struck with inspiration and completely scrapped the languishing design-from-February.

And so, with the help of a few other characters, this year’s nativity is from The Lego Movie, written in three scenes. 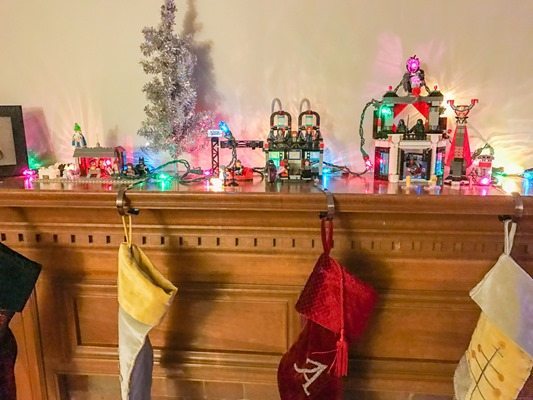 Let’s start with the manger scene.

Vitruvius is happily playing the part of Gabriel, and Princess Unikitty is leading the charge of lowing cattle. The shepherd/sheep government has apparently been replaced, Monty Python-style, by an anarcho-syndicalist commune where each animal takes it in turn to act as a sort of executive officer of the week. 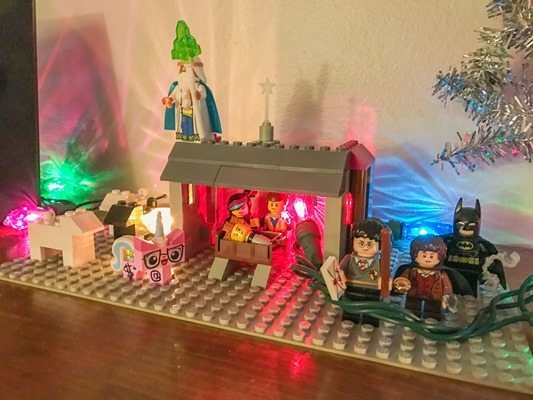 Meanwhile, Lucy and Emmet have just birthed….a baby President Business. A king should always have a nice coif. 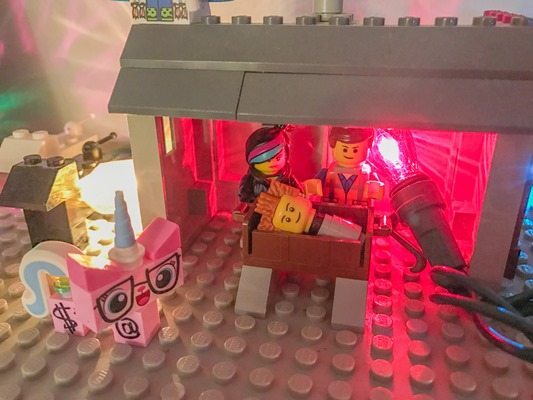 (At this point in the explanation, I wrinkled my brow. “But…why would President Business be Jesus?”, and I was quickly told, “Don’t overthink it. Just go with it.”)

The visiting Wise Men are fairly on point. Except maybe Batman – he’s always seemed a bit too self-focused to follow a star halfway across the known world. Frodo is a bit more committed to the cause. Harry has attitude issues but they all managed to make it to visit the baby. 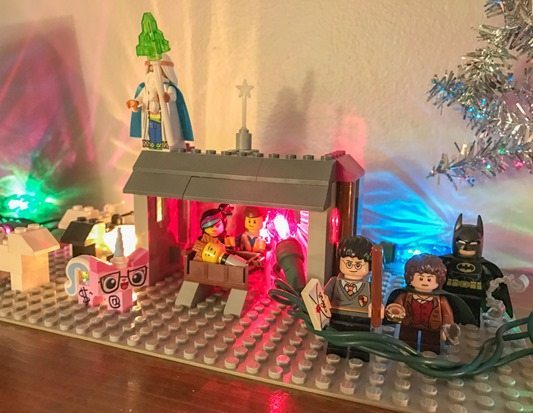 Scene two finds us in the overcrowded inn. It’s kind of an ultra-mod, pseudo-industrial hostel. A real hip kind of place. 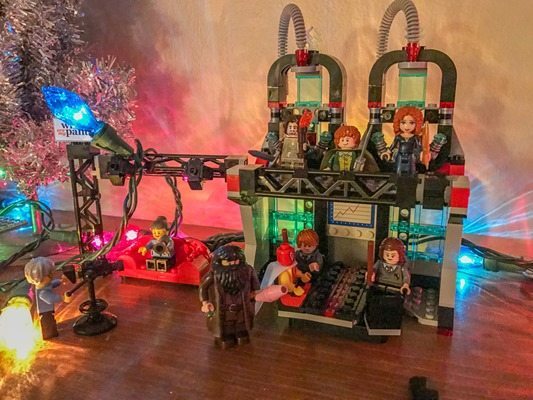 It really was no place for a baby to be born, anyway.

Hermione and Ron seem to be casting a vengeful spell on El Chupacabra after losing a game of poker while innkeeper Hagrid turns his back at the mayhem, 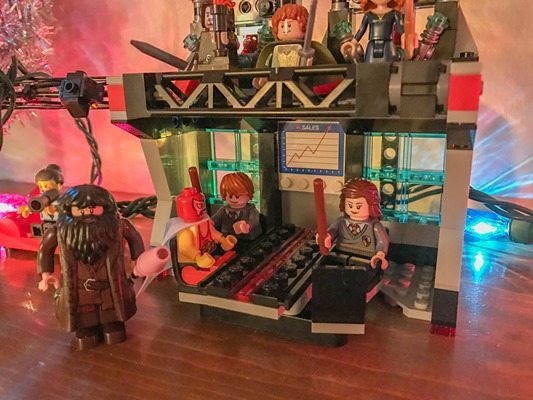 Merida is hitting on a couple of dudes who name-dropped that they knew Frodo, 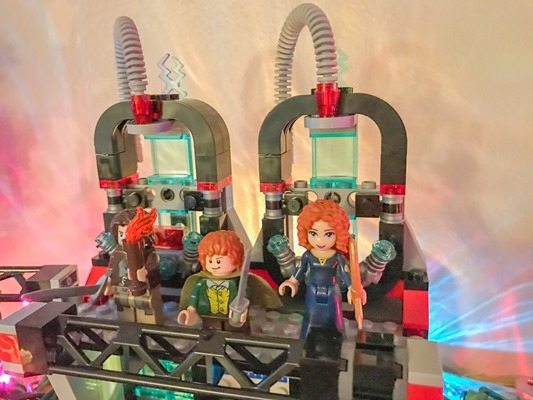 And Ma and Pa Cop appear to be filming an episode of “Where are my Pants?”
Hey, you have to keep it spicy, right? 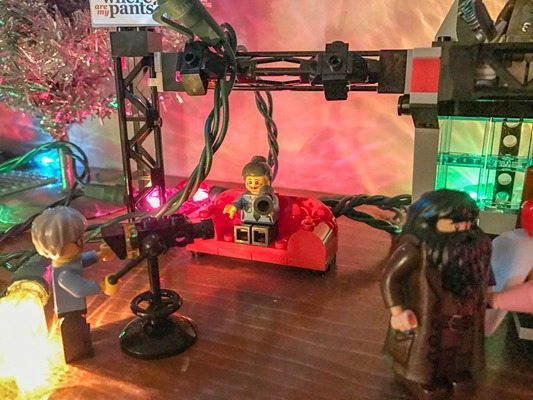 Lucy would have spent the entire night screaming at everyone to be quiet so she could PLEASE get some rest (and by the way does anyone have any hemorrhoid cream?), so the manger was a much better plan.

(But if only there’d been a double decker couch…there could’ve been room in the inn.)

Scene three takes us to Herod’s Castle. Darkness. So much darkness. 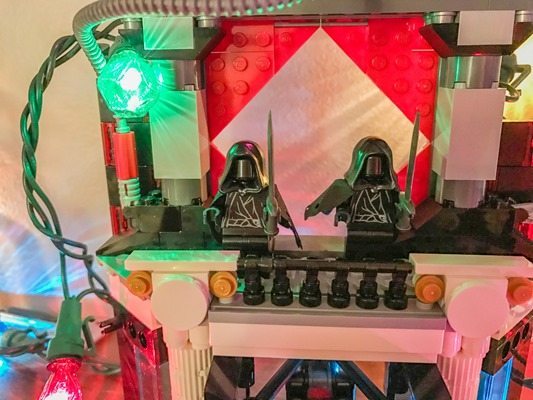 And Lord Business stands by, ready and waiting to Kragle any challanger to be King of the Jews. 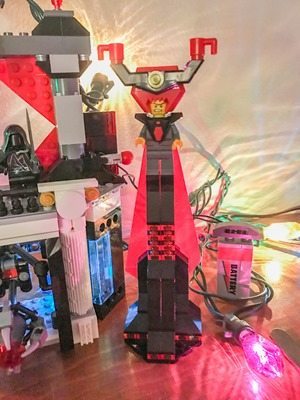 While he waits to find him, he makes good on his promise to Kragle every baby boy in Bethlehem, 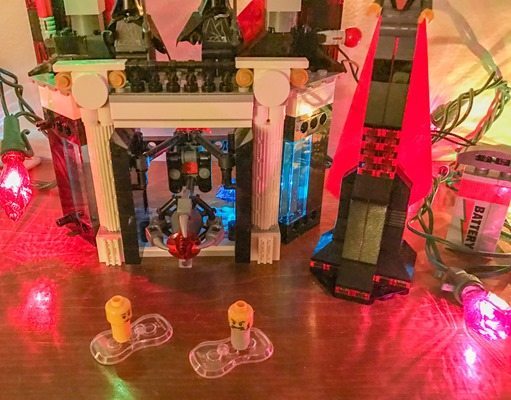 even if they do already have facial hair. Or lipstick. 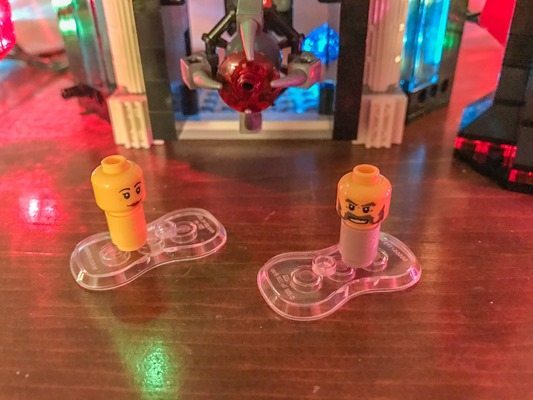 Don’t overthink it. Just go with it.

4 thoughts on “Everything is Awesome…in the Nativity.”