It gets in the way of all that is fun and right in the world.

No really. I seem to have lost the time to write. I’m rarely home in the afternoons anymore, and when I am, my children have already fried my brain into oblivion. Which means that I either a) need to learn to wake up at 4am if I intend to continue blogging, or b) get rid of my children.

Anyway. I have no truly coherent thoughts for you today, but I thought I’d just tell you random bits of our life. Because no matter how boring it is, at least it’s better than talking about politics, right? And you need SOMEONE in your life that isn’t mentioning those T and C words.

Last night at Cubbies (Awanas, like Scouts but at Church), I noticed that Noah was the first kid to, without asking, pick up his snack trash and throw it in the trash can. LIKE A FREAKING MODEL. This made me think back, and I began realizing that I have observed him doing this every single week at Cubbies, then I would promptly black out the memory because it was too painful to process.

I WANTED TO WIPE THAT SMUG, PROUD, SELF-RIGHTEOUS SMILE OFF HIS LITTLE FACE.

And I still might. Right after I remind him to clean from yesterday’s breakfast.

Raise your hands if you’ve upgraded to iOs 10.

(Sit down if you don’t have an iPhone. Yes I’m discriminating against you.)

If you haven’t realized it, they created iOs 10 for sixth grade girls.

And I am in love with it.

But my favorite feature has been, by far, the handwriting feature. (Turn your phone sideways when you’re on the text screen to handwrite your texts.) I have friends with whom we almost exclusively hand-write our texts now, and nothing could look more beautiful than screens and screens of messily handwritten texts back and forth.

It’s like I’m passing notes in class, way back in the elementary school I never went to.

(It has also drastically improved my electronic signature at the grocery store.)

But one of my further goals is to regularly text beautifully(ish) written insults to those I hold dearest. Like this exchange with my precious friend Nikki (and several other friends, because you really should insult fair and wide.) 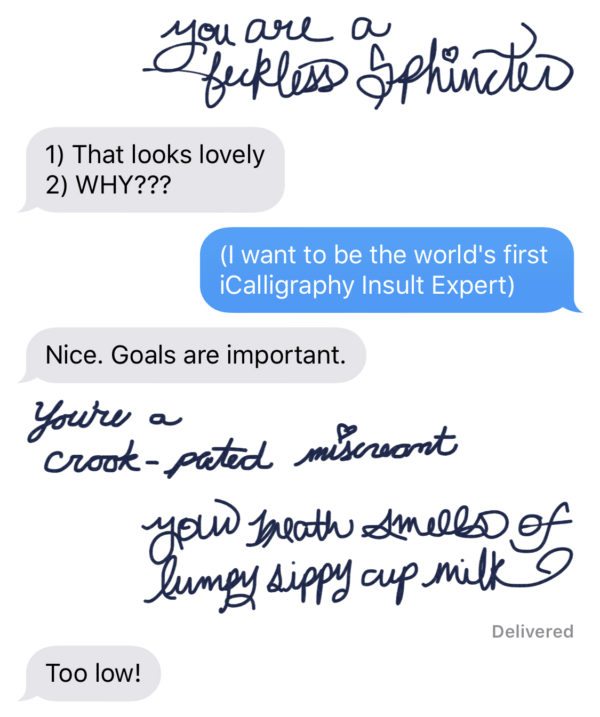 I have a long way to go on having beautiful cursive (I know, “breath” is barely legible), but I want to promise to you now that I will apply myself tirelessly to achieve my goals.

For my entire adult and adolescent life, I have been on the search for The Perfect Pen. This need is doubly important for left-handers, because we need a pen that won’t smear when the backside of our pinky finger rakes across freshly crafted script. I love a good, bold line which deepens that issue – I want boldness that dries immediately, and I want it to feel good coming out of the pen – none of that scratchy Sharpie crap.

I once found this Perfect Pen and I bought them out. But unfortunately, it didn’t last. They made the pen for about half a second after I discovered it, and then it was gone forever. It could have had something to do with its rather unfortunate naming (Permaball) but other pens with less fortunate names have made it longer (Uniball.)

However. I have once again discovered The Perfect Pen. My adoration for it may very well doom it to an untimely death, but I’ll quickly tell y’all about it while there are still some in stock: The Papermate InkJoy. 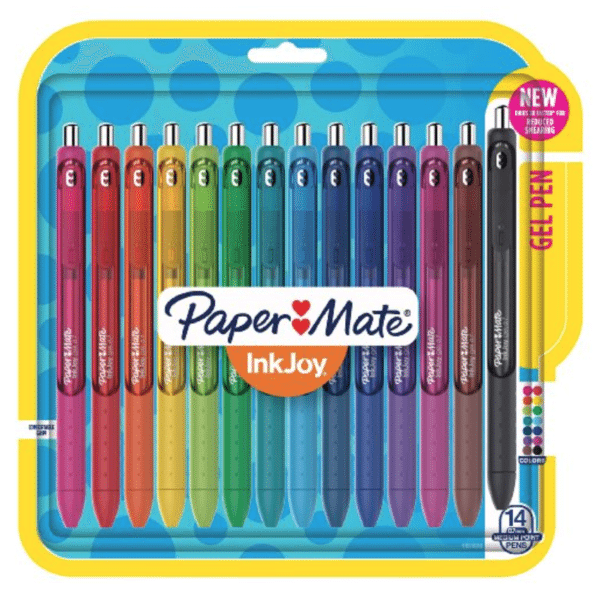 Besides the fact that it comes in fourteen beautiful colors (you must buy the 14-pack to fully appreciate the superiority of this product), it writes boldly, dries quickly, and feels like writing with real creamery butter.

If I were Oprah, I’d be sending you all a pack of these. Just for being here today. But I’m not.

On Sunday, I ran my fifth half marathon on my 35th birthday. Chris and I went to Athens, Georgia for the weekend and enjoyed the college town (I would describe Athens as “adorably quaint and historic with an always-present more-than-faint stale beer odor.”)

As races always do, there were photo ops along the way. I wanted to scream at each and every photographer – “GET OFF THE GROUND!!”

Every one of them were sitting on the pavement, shooting upwards at my lack of thigh gap.

If they want to actually sell these race photos (which, considering I’m still getting emails from the race I did in March trying to get me to buy their blasted upshots), they should learn people’s angles.

NOBODY WANTS AN UPSHOT.

Despite my best judgement, I opened the email boasting of my magnificent race photos ready for purchase.

And I wanted to scream at the photographers all over again.

This made me realize, though – I should surround myself by tall people. The taller a person is, the more of a downshot they have on me, and the skinnier I look. Oh – and that means I look EXCEPTIONALLY thicker to my short friends.

Dishwashing pods are the worst invention ever.

“Do not allow moisture in bucket of dishwashing pods.”

“Do not touch with wet hands.”

Guess what I NEVER need when my hands are dry??

So I’m destined to an existence of clumped-together dishwashing pods. Then I have to rip them apart (with wet hands) and spray the powder from within all over my kitchen.

This has to be part of The Curse. Thanks, Eve.

6 thoughts on “From my Brain Straight to Your Eyes.”