We left a night early for our annual family vacation so as to detour for an Alabama History field trip on the way. We planned to stay near the field trip destination, a couple hours north of Birmingham.

Except that, 45 minutes out of town, my car beeped, presented a message telling us we needed service immediately, then flashed a wrench icon at us.

Chris veered into the right lane as I asked rather frantically, “Is that you slowing down or the car??”

He calmly informed me that the gas pedal was no longer working, and I not-so-calmly informed him to get in the emergency lane, don’t just hang out in the right lane as we quickly quit moving.

He got over while I searched the owner’s manual for the wrench icon. What does the wrench mean? It wasn’t in the first section of dashboard emoji – believe me – I looked at every icon four times. Finally I found a second section where it was listed.

I don’t have all wheel drive. Which meant it was a powertrain failure. And I don’t know much about cars, but I know that the powertrain is fairly important to the process of transportation.

My vehicle is less than a year old – we bought it new after the wreck. My internal panicking was high, but I also was slightly comforted that it would be covered under warranty.

Chris was still idling, very slowly, toward the next exit – about a mile ahead. Just in case, because newfangled cars, I suggested that he turn the car off and back on again – a reboot – just to make sure this wasn’t computer error.

He said no. He did not want to risk it not turning back on with us on the side of the interstate.

So I called the Ford emergency number, they arranged a tow truck to meet us and take my car to the nearest dealership (already closed and in the middle of nowhere), and we continued to idle, quite nervously, up the exit ramp, across the street, and into the gas station parking lot.

Idling can take you farther than you think.

My bladder was not feeling well from the stress, so I ran into the gas station. When I came back out, Chris had finally rebooted the car.

The error light was gone, and it was running fine.

As I bit my lip to not say ‘I told you so’, I suggested we call my dad (and automobile and in particular Ford expert), get his opinion, and please please please keep going. I knew there was no rental car company open in the rural area we were in, and if we got towed to the Ford dealership, then what were we to do?

Chris and Dad agreed, after a minute of me stressedly insisting, that we could keep going.

Meanwhile, I Googled the problem and found that it was quite a common Ford failure on all models from 2008-2016. The Electronic Throttle Body – the thing that tells the engine how hard you’re hitting the gas – had malfunctioned. Which seems like something Ford would want to recall – an easy fix to prevent cars from losing their ability to drive on the interstate – but alas, Ford apparently thinks otherwise.

We kept driving, and the farther we went, the less my soul was consumed with anxiety. But it was dark now, so I really didn’t want to experience that error again.

Just as I got cozy with the idea that we were going to make it to our destination, it happened again.

This time, Chris calmly pulled over to the emergency lane and rebooted the car.

We were an hour away from our final destination, but neither of us wanted to experience this any longer. We were close to another city, Fort Payne, that we knew had a hotel and a Ford Dealership.

So I called Hilton to see if they would be so kind as to move our Hampton reservation from Kimball to Fort Payne. After a few transfers, a couple holds, and multiple retellings of my sad, sad story, they agreed. Without fee, they cancelled my first reservation and got me a closer one.

I was so gushing with thankfulness for the kindness of Hilton that I agreed to talk to their vacation salesman at the end of the call. I really should have known better – this was no time to be planning a vacation or dealing with salesmen – but I even felt kind feelings toward Paris Hilton in that moment.

“Hello Mrs Callahan!! My name is Josh and I would LOVE to tell you how Hilton can give you a deeply discounted vacation!! Only one in fifty callers get to talk to me at the end of their call, so you’re already a winner tonight!!”

That’s one way to describe it…

“Now. What prompted you to call Hilton tonight?”

“Well, we’re having car troubles – like my car is dying on the interstate over and over, and I needed to move my reservation to a closer city.”

“Oh my goodness! Well that’s just terrible. So let’s talk vacations. First, though, would you consider yourself single, happily married, or co-habitating?”

“You’re saying that because he’s sitting next to you?”

My stress was starting to bleed away my Hilton Love…

“We’re VERY HAPPY, okay Josh? But right now we’re just trying to make it to the next exit!!”

“A Ford Flex. It’s a fantastic car except for right now.”

“And except for being a Ford, amiright?” (Salesman Chuckle)

I was not in the mood.

“I was just messing with you, Rachel. Now. Let’s talk vacations. I’m going to give you four destinations, and you tell me which interests you the most. Las Vegas, New Orleans, San Francisco, or Hawaii?”

“You know what Josh there’s no way I can make vacation decisions right now. I’m just praying we make it to Fort Payne. I’ll talk to you some other time.”

“Okay Rachel. Have a great night!”

Right after I dumped Josh, we had failure #4. Thank God Josh wasn’t along for that – I might’ve veered off my kid-appropriate curse word list.

When we finally made it safely to the hotel, I tweeted a simple tweet about our adventure. 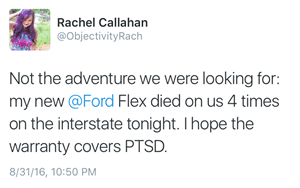 Several people replied to it, I had a couple short conversations, then I put my phone away for the night.

The next morning, Chris had my Flex at the dealership at 6:50am. It was a large franchise (AutoNation) and had a great website where he had been able to get an appointment the night before. We needed to leave Fort Payne by 10am to get to our field trip on time, and I wasn’t feeling too optimistic about that happening – especially after reading that this problem was so widespread that the part was often on severe backorder.

But AutoNation had us covered. They had the part, they’d just replaced someone else’s the day before, they agreed it was definitely the problem, and they had my car fixed, under warranty, before 9am.

Gratefulness again abounded in my heart – I would’ve talked to their vacation salesman for days.

Chris returned victoriously, and we packed up. He mentioned offhandedly, “Did you delete your tweet from last night?”

“Well this morning, I could see all the replies to it, but the original tweet was gone.”

All of a sudden the world felt creepy, as if the big brothers at Twitter and Ford were looking over my shoulder and had determined that they didn’t want my 140 character memo in the world.

After confirming that my tweet had definitely vanished, I tweeted again. 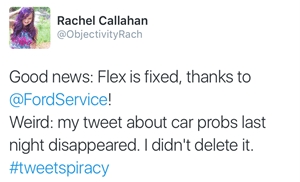 Chris and I checked for my tweet multiple times as did a few followers – it was clearly gone. I didn’t want to believe they’d deleted it – I work hard at being an Anti-Conspiracy-Theorist in all areas of life.

We left for our journey, and had no more car problems the rest of the trip.

48 hours later, I got another reply to the original tweet, so I went back and checked, and…the tweet had been returned to my timeline.

I felt another chill of conspiracy.

…So they decided to delete my tweet until it was no longer new enough to show up in most people’s tweet streams, then they put it back? How much did Ford pay Twitter for this concierge censoring service?

I’m an open fan of Twitter and Ford – I’m a loyal Twitter user and evangelist, and have written multiple blog posts about my Ford Flexes and how awesome they are. This subtle censoring of my rare negative viewpoint felt a little like I was being accused of being a troll, and this made me irritated.

But I moved on to look at the bright side: at least I had a working car, and I DIDN’T have a discounted Hilton vacation that I would forget to use.

5 thoughts on “Three Ingredients For Adventure: Ford, Hilton, and Twitter.”